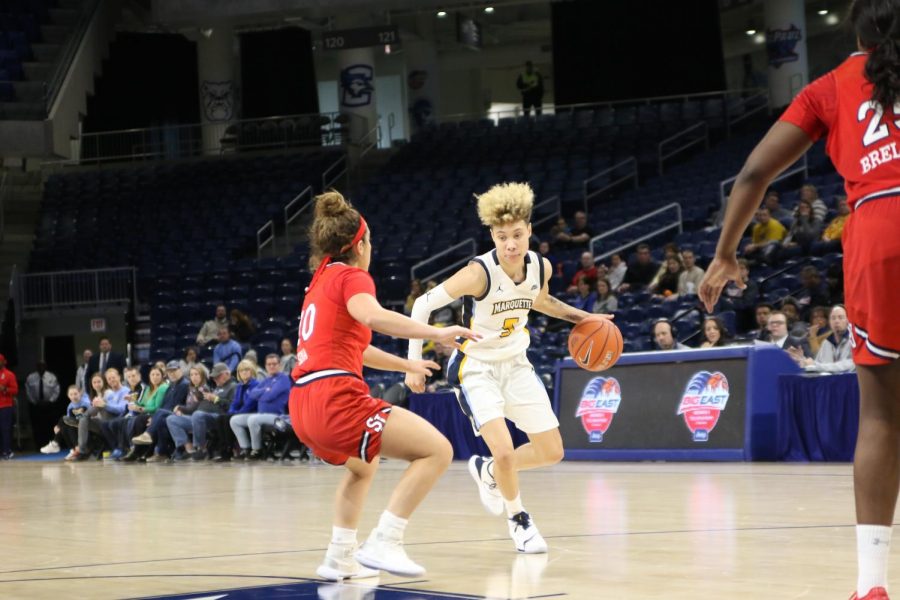 The top-seeded Marquette women’s basketball team defeated ninth-seeded St. John’s 88-57 in the BIG EAST Quarterfinals behind a strong performance from Natisha Hiedeman. It advances the Golden Eagles to the semifinals for the third consecutive year.

“I’m extremely proud of our team today,” head coach Carolyn Kieger said. “They were extremely mature and followed the game plan pretty much to a T. This is the most we’ve been locked in defensively.”

St. John’s remained close with Marquette through much of the first quarter, but then MU took advantage of poor shooting from St. John’s.

Marquette limited the Red Storm to 7-for-27 shooting from the field in the first half. They were also 2 for 11 from the 3-point line in the half. St. John’s finished the game shooting 20 for 61.

“The main thing we’ve talked about all week is having energy and being tough,” Kieger said. “We couldn’t have asked for a better response after our loss up at their place (earlier this season).”

The Golden Eagles had a 40-19 lead at halftime, and Hiedeman had a double-double before halftime. She finished the game with 20 points and 13 rebounds. She did so on 9-for-16 shooting.

“When Natisha is locked in, she’s an All-American candidate,” Kieger said. “Her biggest thing is consistency, and when she figures out that it’s all based on energy, … she’s really hard to stop.”

Marquette was 50 percent from the field and had 48 of its 88 points come from the paint.

“We missed 33 layups combined in our first two games (versus St. John’s),” Kieger said. “We talked a lot about being tough and making sure we’re finishing. We came in (today) offensively wanting to pack inside and getting points in the paint.”

Senior guard Danielle King started in Sunday’s matchup after missing MU’s regular-season finale with a lower-body injury. She collected nine points on 4-of-9 shooting. She appeared to tweak her ankle in the third quarter but returned later in the game.

Marquette improved its all-time tournament record to 7-3 in the Kieger era. The Golden Eagles will play Monday at 3 p.m. Central Time against No. 4 Georgetown or No. 5 Villanova.

“We’ve been working all week for this,” King said. “We’re hungry to get to the championship game. We’re taking it 200 feet at a time.”

“We want to go as far as we can,” Hiedeman said. “We know this (win) is going to prepare us for the upcoming game.”