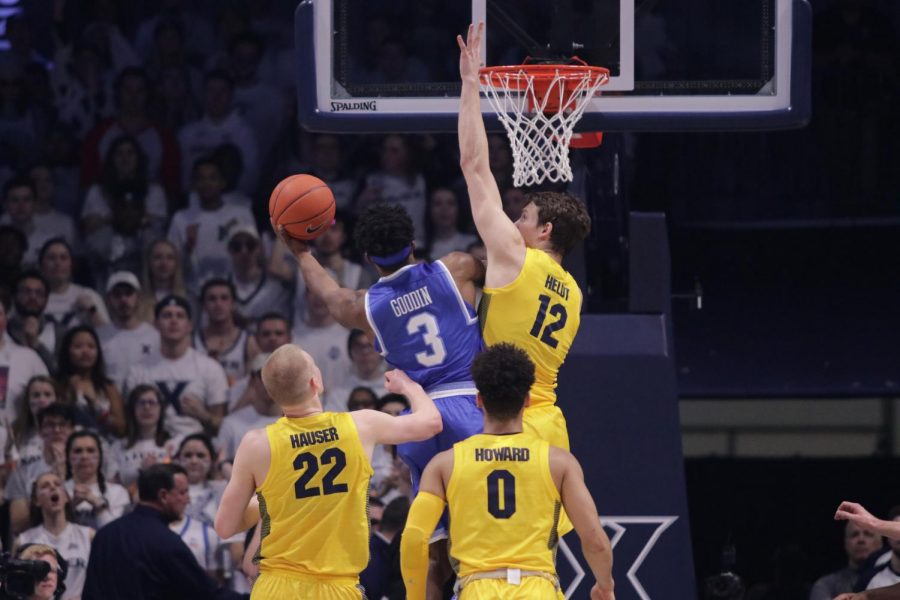 As the first players Marquette head coach Steve Wojciechowski has coached for all four years, Matt Heldt and Cam Marotta’s final home game will have plenty of sentimentality.

“I’m going to be very emotional,” Wojciechowski said. “When I think of what Cam and Matt have added to our program, not just what they’ve done on the floor, but who they are as people in terms of helping us shape a culture and a positive one, they’re as good as it gets.”

While the seniors haven’t necessarily gotten the most minutes, Wojciechowski said he has seen them impact the culture of the program.

Heldt, who hails from Neenah, Wisconsin, was a crucial part of last year’s team and started in 32 of 35 games. However, he has been relegated to the bench now that Marquette has sophomore Theo John and redshirt junior Ed Morrow as other post options.

Compared to when he was a freshman, Heldt said he has grown as a person over the past four years in the program.

“(I’m) wiser,” Heldt said. “I definitely learned a lot at Marquette on and off the court. So I think I’m more prepared to go out into the world and be an adult than I was at 18.”

Marotta’s path to Fiserv Forum was a little less expected. He was mainly a football player in high school until Wojciechowski showed up at Marotta’s house four years ago to convince him to be a walk-on at the same school his father attended.

“I knew of Marc Marotta and his history at Marquette,” Wojciechowski said. “One of the first weeks on the job, I sat down with the entire family and just laid out to Cam what his role would be. Because it’s not for everyone, it’s hard.”

Wojciechowski said he has been impressed with Marotta’s leadership from the sidelines.

“You’re going to be someone behind the scenes who adds to our team,” Wojciechowski said. “I knew he was going to be great, but he’s surpassed expectations. He’s been a terrific young man and representative of our program.”

Wojciechowski gave them credit for helping build the team culture.

“You have to learn from the guys who are ahead of you,” Marotta said. “One of our goals as a walk-on is to make our other teammates better and we try to help everybody out on a day-to-day basis.”

“They were boys. They’re leaving as men,” Wojciechowski said. “They’ve been an asset to our community here. … They’re a huge part of the foundation that we’ve be able to build.”

That has resulted in plenty of respect from their teammates.

“Cam and Matt have ultimate respect from their teammates,” Wojciechowski said. “(They) are in roles where they’re not on the court as much as others, but they do contribute so much to the program. When good things happen to them, if you can’t be happy for them, then you’ve got a real problem.”

Graduate transfer Joseph Chartouny will also be celebrating his final game at Fiserv Forum. Chartouny said he has learned from the two Wisconsinites.

“They’ve just shown me how to be a great teammate,” Chartouny said. “The way they come every day to practice and they prepare for the games just showed me another way I’ve never seen before.”