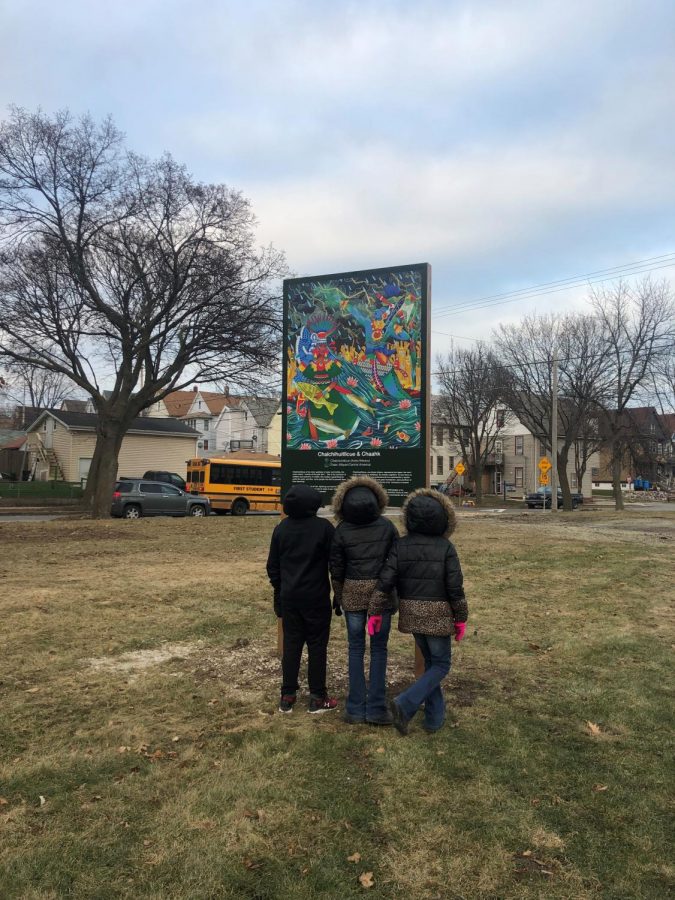 Watermarks was developed by Marquette University and CALL. Photo courtesy of Susan Longhenry

“Watermarks: An Atlas of Water and the City of Milwaukee” is a recent initiative to engage and inform the people of Milwaukee about their reliance on water through the collaboration of art and science in a series of dispersed markers around Milwaukee and informational walks led by local artists and scientists.

Watermarks was developed and funded by Marquette University and  City as Living Laboratory, an organization that makes issues of sustainability tangible through art related projects. It will run with the cooperation of the Milwaukee Department of Public Works, Department of City Development and the Milwaukee Metropolitan Sewerage District.

The atlas is made up of uniquely designed lettered markers that indicate the location of different water resources throughout the city.

“The goal is to keep residents alert and aware of the infrastructure around them,” Miss said.

The first marker went up at Acosta Middle School in the fall of 2018.

“The students chose the letter A for their marker through a schoolwide poll,” Susan Longhenry, director and chief curator of the Haggerty Museum of Art said. “The A stands for agua, arts (and) aquatic awareness, the highest letter grade a student can receive and Acosta.”

“Each marker will have a letter that stands for something unique to the area, and will be made possible by a community group, school, or local agency with the help of artists and designers,” Miss said.

The Watermarks team is currently working on four more markers that are planned to go up in the Inner Harbor District, Walker’s Point, and Walker Square neighborhoods this year.

“Once these markers go up, I think the narrative of Watermarks will really start to appear on the street,” Miss said.

“Anytime there’s a big rain or chance that the system might malfunction, the stack turns from blue to red,” Miss said. “At the same time, each neighborhood marker, like the one at Acosta, starts to flash to alert people in the community to conserve water.”

During these water system alerts residents are encouraged to exercise sustainability by refraining from using their dishwashers, bathtubs and washing machines.

“The project is one of engagement,” Miss said. “Our goal is to get people in their own neighborhoods understanding what the particular issues are for their neighborhoods.”

The second half of the initiative is made up of informational walks led by artists and scientists from Milwaukee.

These walks started in 2016 with the programs launch.

“These walks engage citizens in conversation with artists and scientists about water issues, infrastructure and conversation — viewing the connections between ourselves, the land, the lake and the rivers through the unique perspective of the arts,” Mary Dornfeld, marketing and development assistant at the Haggerty Museum, said.

Artists do not have exhibits on the walk. Instead they give tours to show the many different ways an artist would look at a river or landscape that contrast with a scientist or engineer.

“The dual tours are a really cool way to show that everyone’s view of the world has validity — scientists, artists and local experts all provide alternate viewpoints,” Miss said.

“One walk looked at the history of the Kinnickinnic River (and) artist Gabby Rivera focused her walk on river gods and goddesses,” Miss said. “The walks are such an interesting opportunity to engage specialists across the city on the issue of water, which is so important.”

Longhenry said the walks break boundaries of what an art museum is.