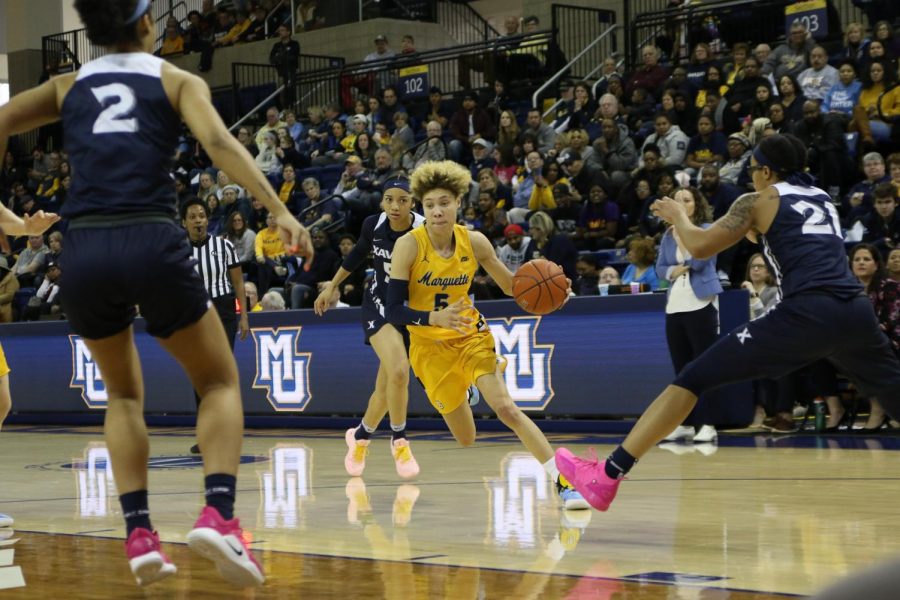 The BIG EAST named women’s basketball senior guard Natisha Hiedeman the unanimous BIG EAST Player of the Year on Wednesday. This is the second straight year that a Marquette player has received this honor.

Hiedeman was also the only unanimous All-BIG EAST First Team selection this season. The guard from Green Bay averaged 18 points, 4.6 assists and 5.9 rebounds per game.

T-Spoon, as she’s affectionately known, has been shooting 45 percent from the field this season which includes, including 40-percent shooting from beyond the arc. She had 13 20-point games this year and surpassed 30 points in two games.

In addition to Hiedeman’s honors, senior guard Allazia Blockton is the BIG EAST Sixth Woman of the Year. Blockton, who was last year’s conference player of the year, was relegated to the bench after an injury early in the BIG EAST season, but she averaged 14.1 points per contest.

Fellow seniors Erika Davenport and Amani Wilborn also earned spots on the all-conference teams. Davenport earned a spot on the All-BIG EAST Second Team despite her season coming to an abrupt end with a lower body injury. Wilborn was an honorable mention.

The Golden Eagles will start postseason play Sunday at 12 p.m. in the BIG EAST Tournament. They will play the winner of a play-in game between Seton Hall and St. John’s at Wintrust Arena in Chicago.