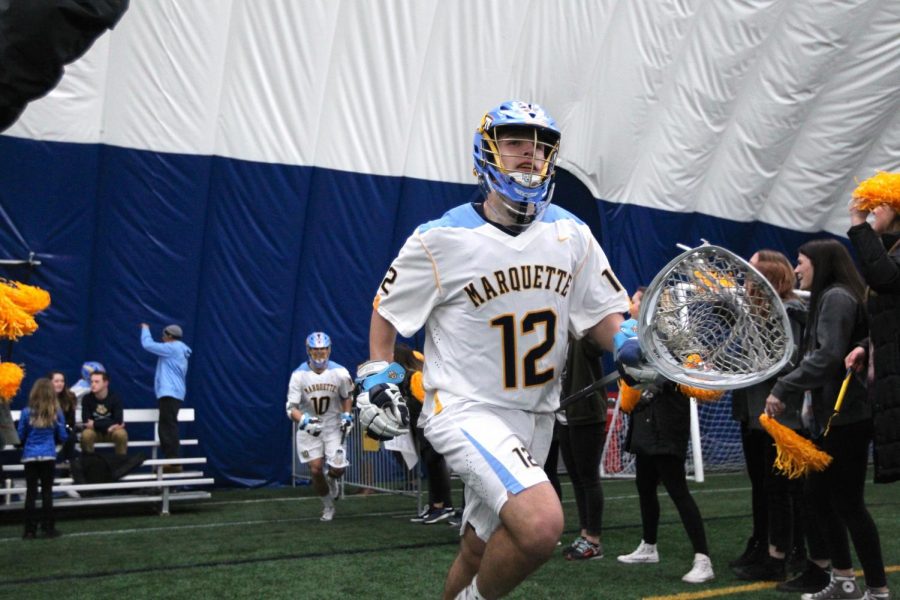 During the fall-ball season, Rolfing filmed, edited and produced a video series to document the behind-the-scenes aspects of the men’s lacrosse program. He produced six videos in the series, and one of them attracted about 6,500 viewers on YouTube.

“I wanted to show the aspects of Marquette lacrosse that outsiders don’t see,” Rolfing said.

The goalie said he became interested in creating videos as early as sixth grade. He used to watch the YouTube channel Dude Perfect, which produced basketball trick shot videos. He then took his camera, went into his backyard and attempted to recreate them.

Rolfing became more avid in producing content when he started at Woodbury High School in 2012. He created lacrosse recruiting videos for friends, student-section hype videos and most notably, a documentary of his high school lacrosse team.

The Woodbury, Minnesota, native continued his passion at Marquette as a digital media major. He collaborated with a YouTube channel called LAXdotCOMtv to create a series that gives an inside look into the team.

“He gave a great little snapshot of everything that goes on,” teammate Mikey Zadroga III said.

Zadroga, a redshirt senior midfielder, was featured in the fifth episode of the vlog. The duo traveled to different landmarks, and they reminisced on the places they have been to in their past three years of friendship.

“It was nice to see me and Chris just collaborate and go over to different stops that we’ve grown fond of and share that with everyone else,” Zadroga said.

That one episode itself took over two hours of filming and a night of editing to fit Rolfing’s definition of perfect.

“He’s easily one of the most hardworking kids,” Zadroga said. “He’s always seeing what he can do to make his (videos) better.  He’s very dedicated and passionate about it.”

Rolfing said he would try to get all his homework done early in the week and then picked a day later in the week to just edit videos.

The junior said he plans on carrying his film talents with him when he graduates from Marquette. He is interested in sports videography, and these vlogs are part of his portfolio.

Since the spring season is in full swing, he said more vlogs of the Marquette team probably won’t be coming in the next couple months. Rolfing is choosing to focus more on lacrosse, but he didn’t disregard the possibility of a few new videos coming out.