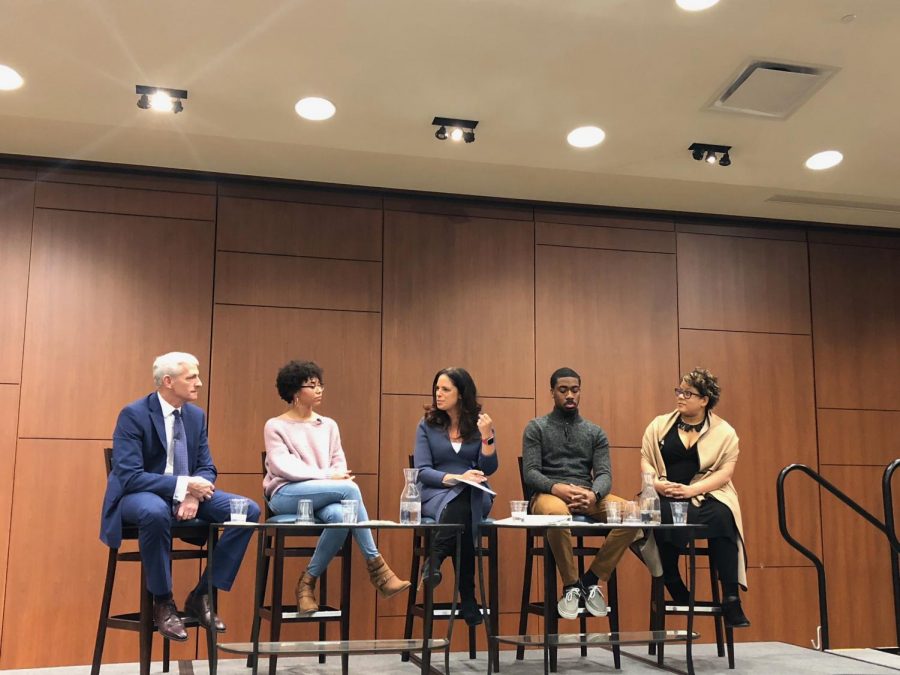 Soledad O’Brien, a well-known journalist, moderated the “President’s Panel on Diversity, Equity, and Inclusion” Feb. 26 at the Lubar Center in the Marquette University Law School.

O’Brien said she had not seen university presidents have casual conversations with students about issues on campus at other universities.

“The first reason that we do this is that all of us — faculty, staff, administrators — are here for the students,” Lovell said, adding that he wants students at Marquette to have a transformational change during their time at the university.

Lovell said interacting with students gives him the awareness that issues are happening on campus and allows him to try to change the campus in a positive way.

“We really need to think about how we change that experience for them so that they have support,” Lovell said.

Lovell said students of color living in cities or in surrounding areas of cities like Chicago or Milwaukee may feel isolated or unsupported coming to Marquette because it is a university with predominantly white students.

Getter said she knew what to expect when coming to Milwaukee. She said she thought it would be different at Marquette.

“I got here and the first thing I experienced on campus was being followed around by an MUPD police officer, with my mom, while I was in a Marquette hoodie,” Getter said.

Getter said she did not feel unsafe afterward, but she realized that race was an issue here.

“It wasn’t going to just be, ‘Okay, well, Marquette doesn’t deal with segregation,’ ‘It doesn’t exist at my university,’” Getter said. “It was, ‘This is reality and I can’t hide from it.’ It’s something that is going to happen, I can’t be okay with it, but I have to learn how to protect myself from it and speak up in a way that will prevent it from happening again.”

“I know people after me are going to go through this (and) I know people before me went through way worse events,” Norfleet said.

Getter said she thinks Marquette needs to take a step forward beyond a conversation.

“We talk about it a lot, we bring it up and then it disappears,” Getter said. “I think that’s one of the big problems here.”

Murray said in addressing the issue of race, it is important to be proactive.

“(We need) to think of steps (we) can take before (a) crisis or to ensure the crisis isn’t always happening,” Murray said, adding that the university is currently in the position of reacting.

Murray said forming a task force or committee would also be a concrete step. She said this task force would be able to walk around campus and see where representation is present and where it is lacking.

“They could ask themselves real questions like, ‘Are there portraits of people of color on the wall? Are there stories of Marquette’s first Asian-American student (and) first Hispanic-American student?” Murray said. “Are these stories being told in that space itself?”

Murray said there has been a historic silence around the issue of race, adding that in Milwaukee, people do not talk about race because of segregation.

Norfleet said there were not many black male students on campus his freshman year.

“That’s a very blatant problem (that) the representation of black males on campus is scarce.”

Murray said when she started at Marquette, there were seven other African-American women working with her as faculty. She is the only one left from that group.

“If you can’t actually have a sustainable presence for our African-American faculty, Hispanic faculty, Southeast Asian and Asian faculty, you can’t have students come into a room and feel comfortable,” Murray said.

However, she said she thinks the fact Marquette is having a discussion shows this matters in a real and present way.

Lovell said Marquette has a high overall student retention rate, but can do better when it comes to students of color.

Lovell said the university is discussing ways to create a yearlong dialogue among students so they will be better engaged and present in conversations about race. He said hearing the information one time in an online training session could remove valuable human interaction among members of the campus community.