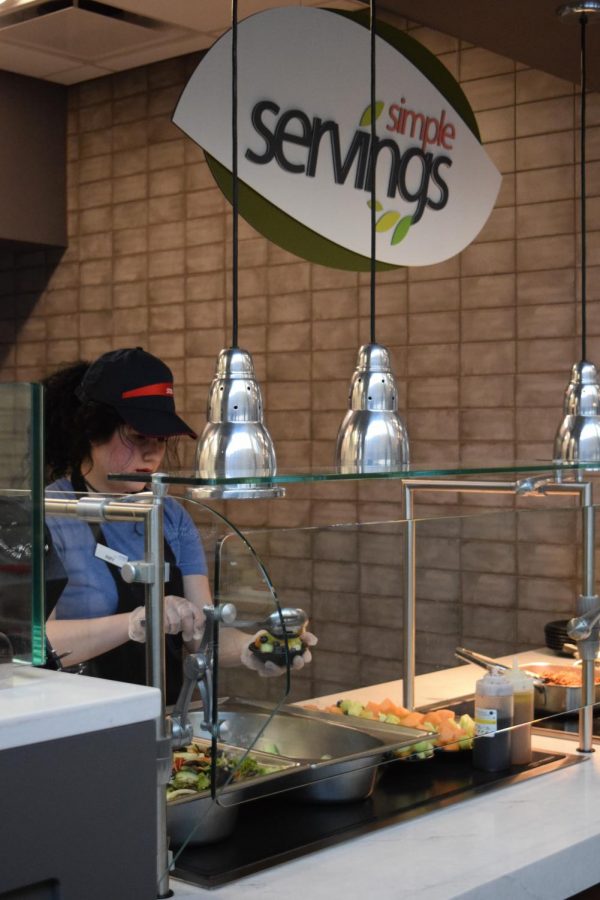 With four dining halls and six alternative dining locations on campus, Marquette University students have a lot of food choices to explore.

With four dining halls and six alternative dining locations on campus, Marquette University students have a lot of food choices to explore. However, students like Brady Walczak, a freshman in the College of Arts & Sciences, don’t always see it that way.

Walczak says he passionate about nutrition. It is something he considers at every meal.

“With the food at Straz, it’s not hard to eat healthy on a consistent basis, however, finding variety of healthy foods here can be harder,” he said.

Walczak said that he eats a salad almost every meal, and while it’s good, it gets repetitive.

“What students don’t realize is every location has a lot of healthy options, and it’s not just the salad bar,” Donato Guida, general manager of university dining, said. “Even when we have healthy items, they see pizza, they see chicken tenders and they kind of gravitate towards that.”

Even though something is not on the menu, there are dozens of options at every meal period and every location they can order from that meets the ‘healthy guidelines’, Guida said.

“It also depends on what they classify as healthy, because you make take an athlete, and you may take a basic freshman student and they have two renditions of what they believe their needs are,” Guida said. “Some people are vegan, some people are vegetarian, all of those are options, even (for) students who have certain dietary restrictions.”

Michael DiBiasi, campus dietician, said the university dining services are always trying to improve, but take step by step to figure out what students consider healthy.

“There’s too many students that don’t necessarily tell us the things they are looking for. What I try to do is meet with those students and figure out what it is that you are looking for, and then how are we going to accommodate you,” DiBiasi said. DiBiasi’s office can be found in Schroeder Hall. Students can meet with him for free.

Guida said Marquette’s dining services also focuses on avoiding the use of chemicals.

“Our policy is that we never use MSG anything, and even (in) our baked goods there’s no preservatives in anything we do, because we make them in house,” Guida said.

Guida said that every dining location on campus has options that correspond with the Mindful program.

DiBiasi said Mindful is a program through Sodexo, a nationwide food and facilities service that services Marquette’s dining halls, that can affect all food items.

DiBiasi said it holds food to a standard of having a high amount of fiber, no cholesterol, no trans fat, low saturated fat, low sodium and a moderate amount of protein. He said students can find Mindful options by looking at the icons on the digital display boards.

“A lot of students don’t recognize it as a really good idea to utilize as part of their nutrition habits,” DiBiasi said.

The Mindful program has levels that dining halls can achieve, silver, gold or platinum, which is the highest certification. DiBiasi said Straz’s dining hall is considered to be platinum — a status achieved only by a handful of Sodexo locations in the country. These levels are based upon total calories, as well as other nutritional values.

Marquette’s dining services also take advantage of today’s technologies. Students have the option of tracking their nutritional data through apps like MyFitnessPal or BITE. They can also track nutritional data using a Fitbit, or visit Marquette dining’s website for nutritional information.

BITE, a free app created by Sodexo in 2016, has all the menus and recipes used in the dining hall, as well as the ingredients used. Guida said that while Sodexo is still working out occasional location kinks, it is overall very helpful for those who want to keep track of what they’re eating. DiBiasi said that they try to put in seven to 10 days’ worth of menus. Students can download the app from iTunes and Google Play.

Guida and DiBiasi said it’s all helpful for those who want to meal plan.

“You can menu plan the entire week and you can do that every single week,” DiBiasi said. “Students who have dietary needs, it really benefits them. All of our menus change every week, and so we want the students that want this information to be able to have it, (and) to be as transparent as possible with what’s going to be in this food.”

Walczak said he was not aware that students had these online resources.

Students with dietary restrictions can take advantage of the Simple Servings sections, which are located at Cobeen and The Commons. These are areas quarantined from the eight major allergens: peanuts, eggs, milk, soy, tree nuts, fish, shellfish and wheat.

“Just because (Simple Servings) is just at (The Commons and Cobeen), there is no location that can’t handle dietary restrictions. There’s no reason a student should ever feel like they can’t be taken care of,” Guida said.

“The reality of it is that we’re really here to take care of them,” Guida said. “These are our students. That’s why they call it the service industry. We really are here with their best interests.”