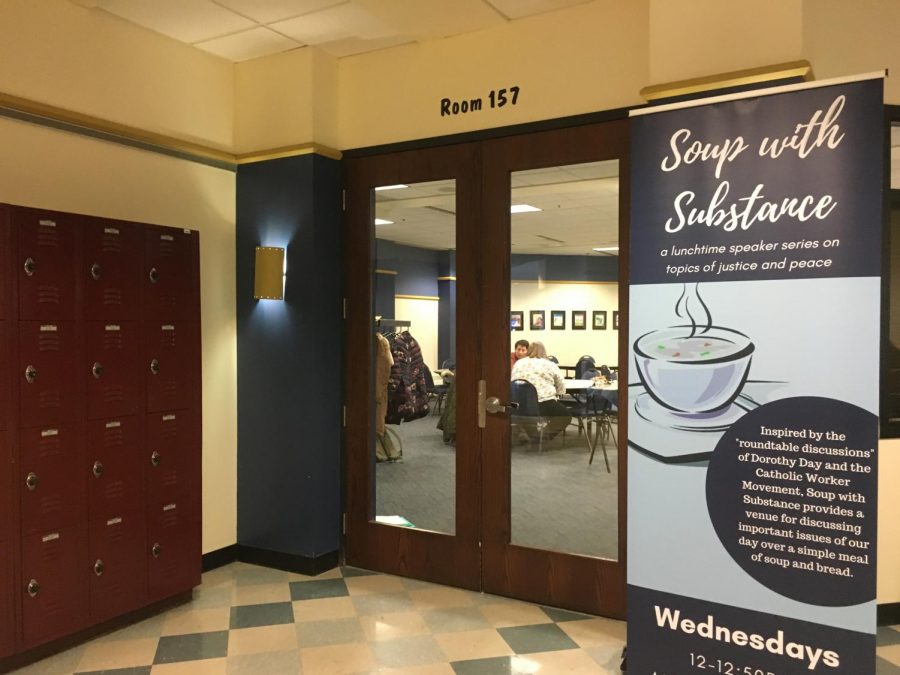 Soup with Substance hosts an event in the Alumni Memorial Union during Constitutional Consciousness Week.

In collaboration with the Soup with Substance series, and as part of Black History Month, Marquette University’s Constitutional Consciousness Week hosted a presentation of a video of former President Barack Obama, and a discussion to talk about the presentation.

The Center for Urban Research, Teaching and Outreach, the Center for Intercultural Engagement, and the Marquette Forum hosted the event.

“Soup with Substance is an opportunity to speak about topics of social justice and peacemaking over a simple meal of soup and bread,” Gerry Fischer, the associate director of Campus Ministry, said.

The Soup with Substance program has been going on since the 70s.

Robert Smith, a professor and director of the Center for Urban Research, Teaching and Outreach said Constitutional Consciousness Week fits under the Marquette Forum’s theme of Democracy in Troubled Times.

“When our democracy is in trouble, one way to address the troubles is to go back to what the Constitution says, but then also to have a broader set of conversations so that we can think in a more inclusive way,” Smith said.

The Presidents Day Soup for Substance event focused on how the government is shaped by the Constitution and how it subsequently affects the lives of everyday people.

“We just wanted to get folks thinking about what our Constitution stands for, specifically from a former president who happens to be a constitutional law scholar and expert,” Smith said. “So the goal was to really be reminded that our current state of political hostility is not where we need to be as a nation.”

People need to be moving forward, and trying to progress on key issues, and using the Constitution to do so, Smith said.

Smith said he thought Obama’s speech was a great way “to be reminded by the value of principles that are supposed to be guiding our nation.” He also said that it was a good way to have a civil discussion about difficult issues.

Fischer said if students get introduced to a topic they find interesting, they might become inspired.

“Maybe they’ll do something about it, they’ll respond, they’ll do more exploration and find an issue they want to advocate for, you never know,” Fisher said. “There’s a lot of issues in the world and it’s hard to be on top of every one and you can’t address every one as a limited human being. That’s the hope, that something may strike someone and cause them to do more.”

Smith said society is witnessing a remarkable community of young people doing remarkable things across the country and locally.

“Students in particular, it is your future,” Smith said. “Our society does not progress without young people pushing us, and the future is in our hands, and being engaged politically is the only way to make those changes. And our Constitution is a great vehicle for that forward progress.”