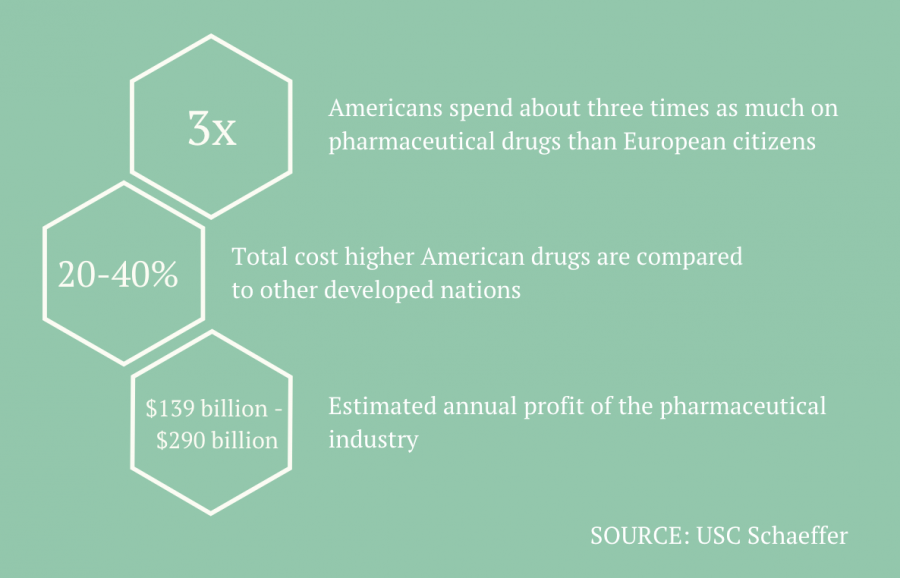 If you’ve recently gone to a pharmacy and noticed the price of your prescription drugs spiked, you’re not alone. Drugmakers increased the price of more than 1,000 medicines at the start of the new year, with increases outpacing the rates of inflation and job growth, according to CBS News. Congress and the president must work together to enact regulations that ensure Americans are able to stay healthy at a reasonable price.

U.S. consumers spend three times as much on prescription drugs as their European counterparts, according to 2018 research from University of Southern California Schaeffer. Americans also account for about 70 percent of total pharmaceutical profits worldwide, despite taking in only 27 percent of global income. Finally, the researchers found that American drug prices are about 20 to 40 percent higher than other developed countries.

The high prices compared to other nations can partially be explained by a lack of regulations over drug producers. Drug companies are allowed to set any price they want in the U.S., a privilege which they often abuse. A prime example occurred earlier this month when Catalyst Pharmaceuticals increased the list price for an annual supply of a once-free neuro-muscular medication to $375,000. In contrast, many other countries negotiate the price of medications with drug companies to forcefully lower prices. United Kingdom residents benefited from this practice in November, when the country’s National Health Service worked with several manufacturers to create a low-cost version of the expensive drug Humira, used to treat arthritis.

One of the main arguments justifying price increases in America is that pharmaceutical companies are funding the development of new and improved medications. Attempting to lower prices may slow the speed of innovation on the most cutting-edge drugs. However, new research from the University of Pittsburgh greatly complicated this theory. The researchers found price increases are “largely driven by existing drugs” rather than the creation of innovative new products.

Thankfully, there appears to be widespread public support for politicians to take action against drug companies. About 52 percent of Americans said lowering the price of prescription drugs should be a top priority for Congress and the president, according to a 2018 survey by the Kaiser Health Tracking Poll. This represented a greater percentage than any other issue, including the opioid epidemic and border security.

Several politicians appear to be mobilized around this effort as well. In President Donald Trump’s recent State of the Union, he argued Americans paying more for prescription drugs “is wrong, unfair and together we will stop it.” Lowering drug prices is also a policy goal for many congressional Democrats, who began an oversight investigation into the drug industry this January.

While the issue of drug prices is largely agreed upon, a solution isn’t. However, several promising proposals are under consideration. In January, Sen. Bernie Sanders and House Rep. Elijah Cummings introduced legislation that would fix prescription drugs to their median price from five countries — Canada, Britain, France, Germany and Japan — as drug prices are cheaper in each of these countries. This would allow the U.S. to utilize the success of regulatory pricing programs in other nations to its own benefit. Trump also proposed a similar international index model in October.

In January, Sen. Chuck Grassley introduced another inventive proposal, titled the Safe and Affordable Drugs from Canada Act of 2019. The act would permit Americans to import prescription drugs from approved pharmacies in Canada, a practice that is currently illegal. Importing cheaper drugs also aims to force American drug companies to lower domestic prices because of the increased competition.

These proposals represent tangible steps forward to lower drug costs. Congress and the president must utilize their mutual support for a solution that will allow Americans to stay healthy without going broke.