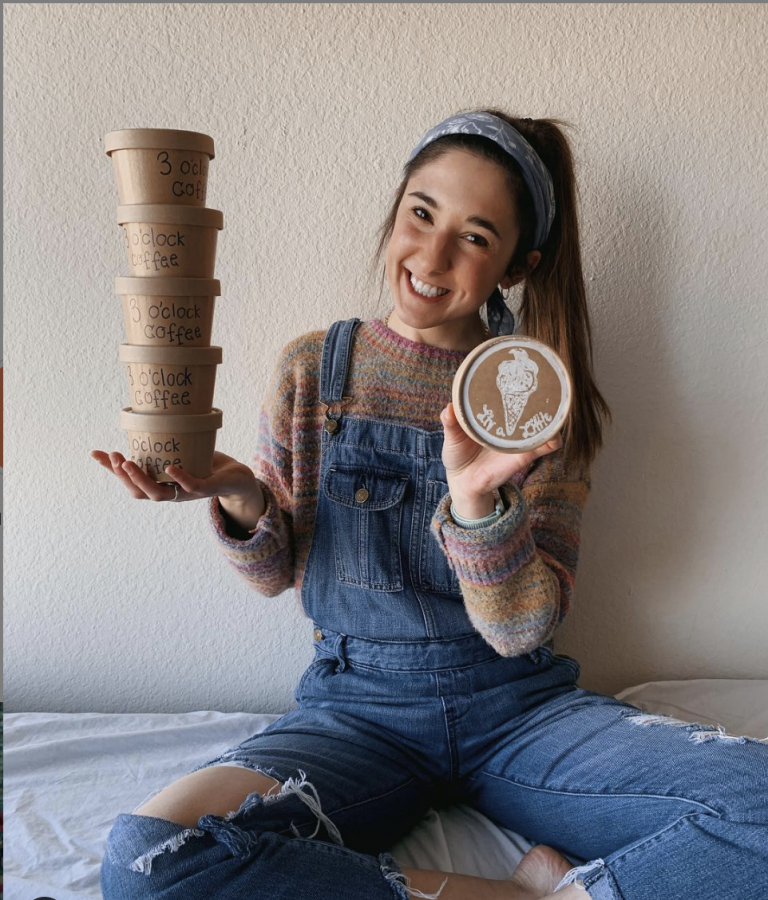 Olivia Menzia, a senior in the College of Communication, started her own vegan ice cream shop earlier this year. Courtesy of Olivia Menzia

In just a few months, Olivia Menzia has built her obsession with ice cream into a business, selling 100 half-pints of her personally made, vegan ice cream in the first two weeks.

A senior in the College of Communication, Menzia said she felt she was spreading herself too thin and taking herself too seriously during her last semester. She made a New Year’s resolution to pick one thing to put all of her energy into. Her choice: Liv a Little Ice Cream.

While the idea has always been in the back of her mind, Menzia said she made the decision to pursue her ice cream business this past winter break. She said she will never forget walking into her fall internship, at ad agency Hoffman York, located in the Third Ward, one day and saying she was tired of sitting at her desk and just wanted to be making ice cream. One of her coworkers turned to her and told her she should, and Menzia took it to heart.

Menzia announced on her personal Instagram Jan. 1 that she would be pursuing Liv a Little Ice Cream. The first post on her business Instagram came Jan. 3 and her sales began Jan. 29.

Menzia said messages on Instagram came flooding in, and within the first day, she had 50 orders for her first flavor: 3 O’clock Coffee. She closed her sales Feb. 10 at 100 cartons.

Menzia will finish the placed orders and launch her next flavor at the end of the month. Menzia said she will release new flavors one at a time for flavor testing. 3 O’clock Coffee was sold for $4 per half-pint, but future flavors will vary in price depending on the ingredients.

“I always wanted to do something where I could use creativity,” Menzia said. “I think the cool thing about the ice cream is — one, it’s my favorite food and I’m obsessed with it — but also I can experiment and be creative with the flavors and design.”

Katie Ruffino, a junior in the College of Health Sciences who became friends with Menzia this semester, said the ice cream business is very fitting for Menzia. Ruffino said Menzia eats ice cream nearly every day. Ruffino was initially interested in Menzia’s experience taking classes at the Milwaukee Institute of Art and Design, but she said the two quickly bonded over their love of food. Ruffino said Menzia’s bubbly personality is shown in her products, and that the authenticity of Liv a Little Ice Cream makes the product even better.

“I was walking down Wisconsin Avenue and (Menzia) started waving me down,” Ruffino said. “She was so excited for me to try the ice cream and really wanted me to give her my honest input so that she could improve her product.”

Menzia said she makes the ice cream in her room at her apartment and packages them in cartons, hand-painted with the logo of her own design, paying for the materials herself.

“I make it at 2 a.m. My roommates are haunted by the sound of the ice cream machine,” Menzia said, adding that the business is essentially a one-woman show.

Menzia said customers can pick up the ice cream from her house, or she will hand deliver it. She said it is a good way to put a face to the name and build her customer base. She said she plans on having all orders picked up in the future, and she bought a second fridge to accommodate the growing interest.

As for flavor ideas, Menzia said she gets inspiration from her childhood and all of the ice cream she has eaten. She said when she was a kid, she would go to her grandparents’ home and have sherbet with mint, a flavor she is currently trying to make. She said she wants to keep the flavors unique and playful, making sure not to take things too seriously.

She said the decision to make the ice cream vegan was a way to include the many friends she has who are lactose intolerant, and the point of making her ice cream vegan is not to make it healthy, but rather to create something that everyone can enjoy and to separate herself from other markets.

A vegan herself, Kylie Champion, freshman in the College of Nursing, said finding vegan ice cream can be hard. She said she likes the personal and handmade concept of Menzia’s business and that Menzia cares enough to make vegan ice cream.

“It’s cool that it’s made by someone at my university. I want to support my peers,” Champion said, adding that she would immediately be placing an order.

While Menzia was surprised by how quickly her product caught on, her friend Kevin Ryan, a graduate student in the College of Health Sciences, said he wasn’t shocked at all. Ryan said Menzia knows a lot of people on campus and finds a way to connect with everyone. He said he likes that Liv a Little Ice Cream appeals to a lot of people, adding that, of course, the taste is also great.

“I ate the whole carton in five minutes if I’m going to be honest,” Ryan said.

Ultimately, Menzia said, she wants to sell her ice cream from a truck or van at farmers markets and do freelance designing for companies on the side. As for a storefront, Menzia said that is much further down the line.