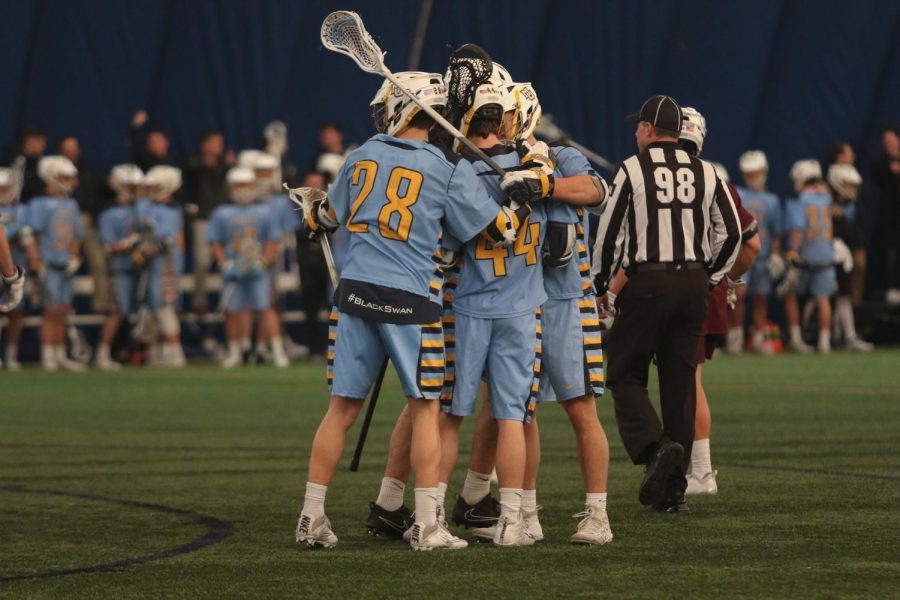 Last season, it took Marquette 57 minutes and 53 seconds to put Jacksonville away. This year, the game was completely different.

In Friday night’s contest at Jacksonville, No. 19 Marquette defeated the Dolphins 14-12. Marquette did not trail for a single second.

“We played hard,” men’s lacrosse head coach Joe Amplo said. “That should always be the thing we’re known for. We’re always going to be a tough group that’s willing to fight.”

The Golden Eagles got out to a hot start, putting up six goals in the first 15 minutes and taking a 6-1 lead.

The second half was a much different story. Jacksonville clawed its way back, bringing its deficit to just one.

However, junior Nick Grill had six ground balls on the day and made some crucial interceptions to keep the ball out of the cage.

“It was a gritty win,” Amplo said. “I wouldn’t say there were any team highlights. I was just proud of how hard we played.”

“We’ve been waiting for (Pelton) for a few years to have moments like this. We knew he was capable,” Amplo said. “He just does what he does and he was successful.”

Sophomore John Hulsman allowed 12 goals past him, but he had nine saves on 36 shots faced.

“(Hulsman) has been steady,” Amplo said. “It’s not just him. It’s the whole goalie group. Johnny was the guy who got the opportunity on Friday night and did what he was supposed to do.”

For Jacksonville, Evan Tyler found the back of the cage five times and Jack Dolan added three goals. The Dolphins dominated at the faceoff dot, winning 17 of 30.

“(That’s) as hard of a team as we’ll see all year. They took us out of our rhythm,” Amplo said. “We were uncomfortable. We were lucky we got up early because after that, they took it to us and really dominated at times.”

Marquette (2-0) will return to Milwaukee for a matchup against Detroit Mercy next Saturday at noon Central Standard Time.