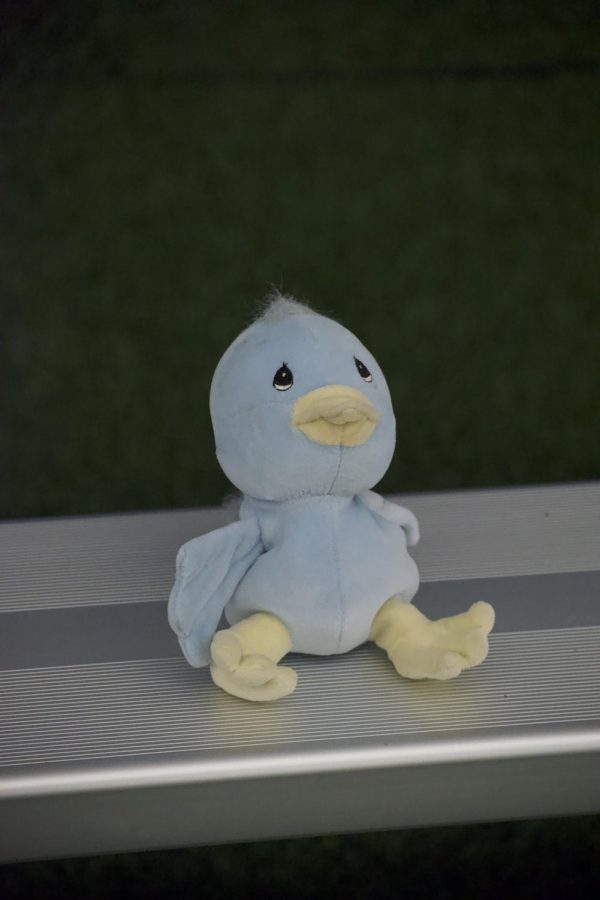 Even though sophomore defender Jocelyn Miller is more than 900 miles away from home, she has a little piece of her family in Milwaukee: a blue duck.

“It’s actually really special to me because my mom had a baby before me, but it passed away at birth,” Miller said. “So, my mom put a blue duck in the casket.”

Miller said after the funeral, her mother went back to the store and bought the rest of the blue ducks. The ducks were then given to Miller and her three younger siblings, Liam, Kassidy and Lucas.

The sophomore had the duck for 19 years, even bringing it to the sidelines of her high school games. She said she isn’t superstitious but always needed to have the duck or else she thought she would play poorly.

“The team didn’t buy into it as much (in high school), Miller said. “It was kind of just my thing. I like that it’s a thing here everyone can share.”

Her Marquette teammates have joined in on her ritual, petting the duck prior to every game.

“It’s kind of a quirky thing,” senior midfielder Logan Dobratz said. “We’re very unique and fun and (a) family-oriented team and I feel like the duck just kind of is one little thing that adds to that family aspect.”

Even head coach Meredith Black has participated in her team’s tradition.

“It’s just … one of those superstitious things that everyone’s bought (into),” Black said. “I just one day heard about it and then I was like, ‘OK I have to do it.’ Everyone just feels like they have to do it.”

Black and the team first heard about Miller’s story earlier this season when the Golden Eagles went on a team bonding trip. A Marquette sports psychologist had each person share a vision board with something that inspires them. Miller talked about her blue duck.

“(Coach Black) came up to me after and was really inspired about it,” Miller said.

Miller’s teammates, along with Black, were moved by her connection to the blue duck.

“That was really meaningful and really cool to see how it means so much to her and then that just brings us all together even more saying like, ‘Oh, this actually means something for us as a team,’” Dobratz said.

Even though the team didn’t find out the story behind the blue duck until this year, the pregame ritual began two to three games into Miller’s freshman season.

“She had it in her backpack, and she showed it to us,” Dobratz said. “All the sudden we started touching it. … Then it started being a tradition.”

The duck hasn’t missed a game since.

“If the blue duck’s not here, we have to go all the way up (to campus) and get it,” Dobratz said. “It’s just something that brings us together on game day.”

Miller, a native of Manorville, New York, said she is very close to her parents, Tom and Kathleen. Her father played lacrosse at St. John’s University, and although Miller’s mom can’t be there at every game, she always has her own duck while Miller plays.

“My mom actually holds one on the sideline or at home when she’s watching the game … for good luck,” Miller said. “She sometimes sends me pictures of it.”

Most recently, the Golden Eagles petted the duck before their 22-9 win over Detroit Mercy Sunday. Black said against the Titans, it helped. They also petted it in the team’s win over Louisville Feb. 10.

“It helped us on Louisville, so we’re just going to keep going with that,” Dobratz said.

The duck goes on the road, too.

Dobratz said the team takes the duck on the bus and on the plane.

“You have to bring it to away games,” Miller said. “You need the luck everywhere.”