President of Jesuit Superiors of Africa and Madagascar speaks at Marquette 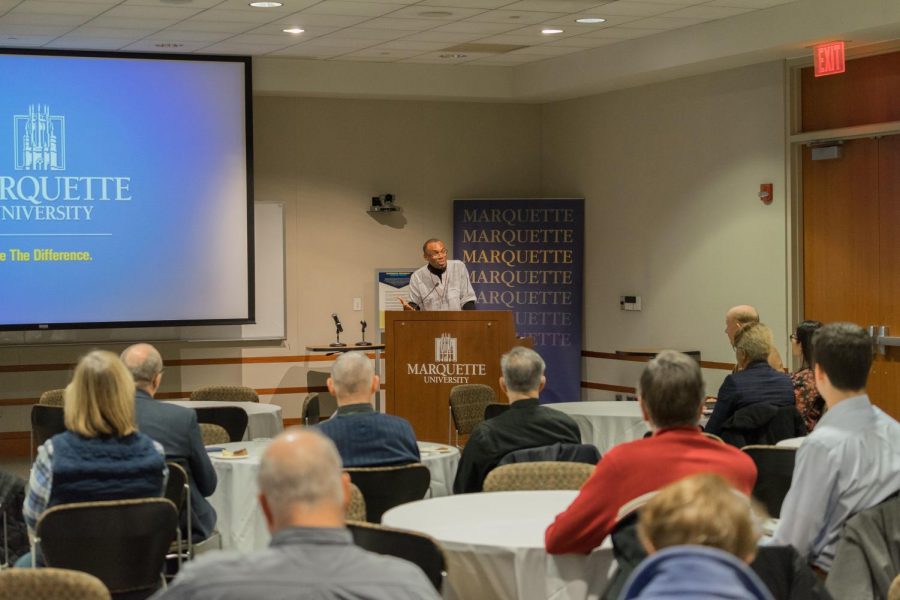 Agbonkhianmeghe Orobator spoke to members of the Marquette community about Jesuit education.

The Faber Center invited Agbonkhianmeghe Orobator, theologian and president of Jesuit Superiors of Africa and Madagascar to speak to members of the Marquette University community about Jesuit education Feb. 11.

“Jesuit education is an invitation to venture into those cracks of questions, issues and situations that shape and define life at its most basic and concrete manifestation, locally and globally,” Orobator said.

Michael Dante, director of the Faber Center, said the center usually hosts one or two speakers every year in addition to various retreats.

Dante said the center chose Orobator as its spring speaker because he could bring a fresh perspective to spiritual life at Marquette based on  his global experience as a Jesuit.

“We chose this speaker for a couple of reasons — his current role as the Jesuit president of Africa and Madagascar in the Jesuit conference, and he’s done a lot of work with higher education,” Dante said. “He’s also a theologian and some of his work brings him to Rome. So he has a great depth in Ignatian spirituality in higher education, but he also has a very global perspective.”

Sister Anne Arabome, associate director of the Faber Center, is Orobator’s cousin. She said she hoped the speech and all efforts by the Faber Center would inspire the campus community to grow in Ignatian spirituality.

“The person comes to fullness and understanding of who they are when God is in their lives,” Arabome said. “And being in a Jesuit institution, we want to imagine that what they experience will have a ripple effect in the classroom.”

During his talk, Orobator focused on St. Ignatius’ life and conversion and how this could be applied to one’s own Jesuit education.

Orobator was raised in an African religious tradition and said this had a strong positive impact on him. He converted to Christianity later in life and said his conversion experience gives him a special tie to St. Ignatius.

“When Ignatius of Loyola speaks of awe and wonder from this simple experience of looking into a deep-running stream, I can resonate with that,” Orobator said. “I believe him.”

“It opened my eyes,” Orobator said. “It showed me that education is more than passing exams. It’s about really being attentive to the reality of the world and your responsibility of changing that reality for the better. That is the core of Jesuit education.”

During his speech, Orobator said St. Ignatius was “committed more to serving the poor than to any personal titles or achievements” and he called on the audience to maintain similar priorities through Jesuit education.

Eric Kowalik, a researcher and instructor at Raynor Memorial Libraries who attended the speech, said Orobator’s ideas of a Jesuit education resonated with him.

“I think as an educator, it’s a good reminder for what Jesuit institutions are trying to (do) and what the focus should be,” Kowalik said. “Providing skills is important, but it’s important to be cultivating students to be men and women with and for others and making sure that you’re using your talents to help the greater good and not be selfish with them.”

Sister Irene Ogutu, a graduate student studying chemistry, has heard Orobator speak before, and attended the speech to learn more about Ignatian spirituality.

“I’ve always enjoyed his talks during homilies and during Mass (at Gesu),” Ogutu said. “He gives me great insights when he was here at Marquette for one year. Every time I attended his Mass, it was quite encouraging and quite enriching and I am looking forward to learning more about Ignatian spirituality, being that I am a Franciscan.” Franciscans are a group of mendicant religious orders within the Catholic Church.

Orobator ended the speech by calling on members of the Marquette community to make sure Marquette graduates are not only professionally skilled, but also contain spiritual depth.

“Against this grain of superficiality, I am convinced that the tradition of Jesuit education invited its practitioners to depth,” Orobator said. “The opposite of depth is not shallowness — it’s mediocracy. I believe that at its best, this tradition of education has no mediocracy, rather it pushes boundaries (and) it expands horizons.”