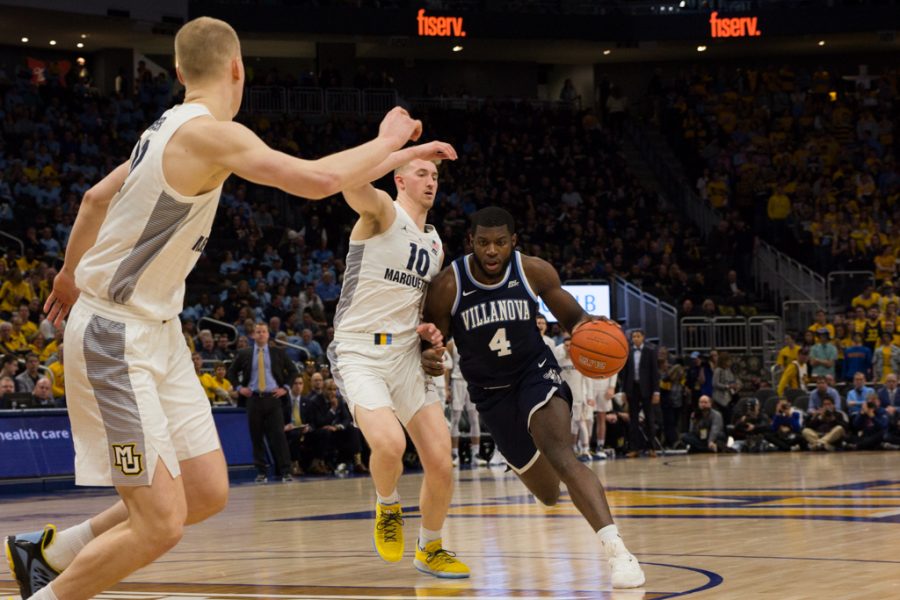 Hauser brothers struggle from the floor
Both Sam and Joey Hauser seemed to not be able to find the basket Saturday afternoon.

Villanova held the Hauser brothers to four combined points, all of which came from Sam Hauser.

Sam Hauser, who averages 15.7 points and seven rebounds per game, ended the day on just 2-for-6 shooting and three rebounds and did not have a 3-pointer. He had the task of stopping Villanova star Eric Paschall.

“A lot of guys did a lot of things that didn’t show up on the stats sheet,” Howard said. “Sam was doing a great job on Paschall, who was making some tough shots, but Sam was making some things difficult for him.”

Joey Hauser finished 0 for 4 from the field and only attempted one 3-pointer. This was his first scoreless game of his collegiate career. Villanova head coach Jay Wright said his team focused on stopping Sam and Joey Hauser.

“We also respect the Hausers,” Wright said. “We tried to play them tough also. We did a good job on those guys.”

Marquette provides in the paint
With 3-point shooting not working well for Marquette, the Golden Eagles turned to its scoring down low to outlast the Wildcats.

Much of that post presence came from redshirt junior Sacar Anim, who had 12 total points on 2-pointers.

“When (Anim) got into the paint, he made really mature decisions,” Marquette head coach Steve Wojciechowski said. “Sacar was absolutely huge in this game.”

Freshman Brendan Bailey had four crucial points inside as well to help Marquette outscore Villanova 30-18 for points in the paint.

“Our guys had enough willpower and toughness to gut it out against a team that’s one heck of a basketball team,” Wojciechowski said.

“They did a great job (defensively),” Wright said. “They do a good job being aggressive and really staying connected at shooters. They fly at you. They come hard to contest.”

Even when sophomore Theo John, who leads the conference with 2.2 blocked shots per game, fouled out with less than five minutes remaining, the rest of the team was able to stay strong defensively.

“(Villanova’s) a really really good basketball team defensively and offensively,” Wojciechowski said. “Even though we may have not played our best offensively, our guys found a way to win.”