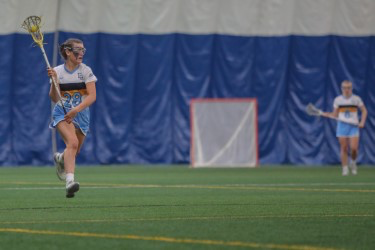 While all of her teammates were preparing for the 2019 season, sophomore Jocelyn Miller was on the sidelines.

She suffering a torn hamstring over the summer, which restricted her availability in the fall. She only played in the final tournament of the fall season.

“It made me become a smarter player and a more helpful asset of the team because I was able to watch from the sidelines,” Miller said. “I also think it made me grateful that I can play this sport now.”

Miller said she saw the injury as a chance to grow as an all-around player.

As a freshman, Miller started all 18 games for the Golden Eagles and had 34 ground balls, three draw controls and 17 caused turnovers, making her one of the team’s top defenders.

“I came in not expecting to perform as well as I did, so there wasn’t any pressure for me to make that much of an impact,” Miller said. “It was more fun for me to not have pressure on me and just play.”

Miller said her favorite moment from last season was the 15-14 win over the University of Connecticut that took her team to the BIG EAST Tournament.

With a strong freshman season behind her, Miller now has a year of experience under her belt. Marquette head coach Meredith Black said having sophomores play crucial roles on the field is a bonus.

“There isn’t a lot of pressure on them,” Black said. “You’re not an upperclassman yet and you’re no longer a freshman, so this is a time in their careers where they can step into some roles on the field.”

Miller already proved to be an impactful player and will continue in her role as an important defender this year. Black said Miller’s strength is in her play, and Miller has worked on being more vocal.

“I’ve always been a leader by action in the way that I play and by being aggressive,” Miller said. “There was some pressure on me to be more of a vocal leader this year. In the fall, when I was not able to be a leader by action, my injury during the offseason aided the opportunity for me to become more vocal.”

Miller is coming into her sophomore season with more experience, which has resulted in more respect from teammates.

“If you are starting as a freshman, people are going to respect you as a player,” Miller said. “I was just talking to a freshman that is going to start this year, and I was telling her that people will respect you if you do well in your role as a starter.”

Teammates aren’t the only ones to respect Miller.

“She is the most aggressive player on our field,” Black said. “She is going to apply high pressure to the opponent and take over games, which is really hard to do from her defensive position. You are going to notice her all year.”