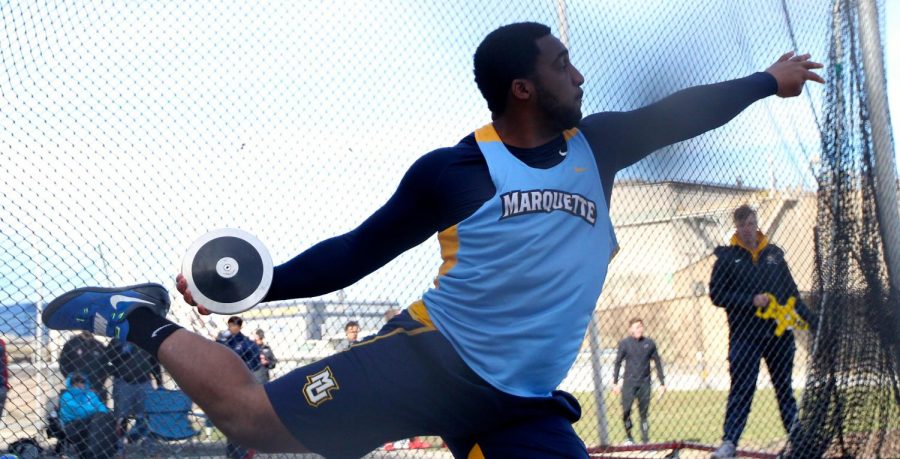 “I want to leave a legacy of hard work, having the right attitude and getting better,” Howard said. “I would say it’s been a successful four years here.”

Part of that legacy will be how he closes out the indoor season and moves on to outdoor. So far this season, he has been on pace with his top distances.

During this indoor season, he achieved a personal record weight throw distance of 19.12 meters, BIG EAST Field Athlete of the Week recognition, a second-place finish at the Iowa meet and a fifth-place finish at Notre Dame.

“He seems like he’s right there and ready to break out again,” senior teammate Brendan McKinney said. “He’s right there in the conference and I’m excited to see what he can do.”

Howard said he has big goals for the rest of this season, including defending his BIG EAST indoor throw title.

“It was an amazing feeling,” Howard said. “It’s not going to be easy, but I’m motivated more than ever to get back to that peak.”

He added that McKinney will also be more motivated than ever to claim the title after finishing second to him last year.

While there is competition between teammates, there is a lot of support as well, and McKinney credits Howard with helping him work hard right from the start. They were even roommates their freshman year

“He was so dedicated to track so I just followed in his footsteps,” McKinney said. “He is a student of the sport and he watched people who were better than him to learn.”

McKinney also said he has always looked up to Howard. He said it was special to have them both do well in the conference championships last season.

Regarding Howard and McKinney’s relationship, throws coach Mike Koenning credits the seniors for being able to have healthy competition. Koenning said that while they genuinely support each other, they also use wanting to beat each other as motivation to get better.

Track and field is typically labeled as an individual sport, with athletes seeking times and personal records. But there are times when they are playing more for the team, and Howard said their first outdoor championship as a team in 2016 was one of his favorite moments of his career.

“It was very special for me,” Howard said. “I had never been a part of a team that had been that successful before. Everyone contributed something to the team.”

Koenning and McKinney said it was special it was to have multiple athletes standing on the podium at the BIG EAST Indoor Championships.

Koenning and all the other track and field coaches were a big reason why Howard chose to come to Marquette.

Howard said throwing is a sport which is very technical and requires a lot of time to develop, so good coaching has helped him throughout his career.

With coaching and his work ethic over the last four years, Howard has put himself in a position to be captain in his senior season. When looking back on his time here, Howard said he is appreciative and reflective.

“It’s been a crazy four years,” Howard said. “I can’t believe it’s coming to an end.”