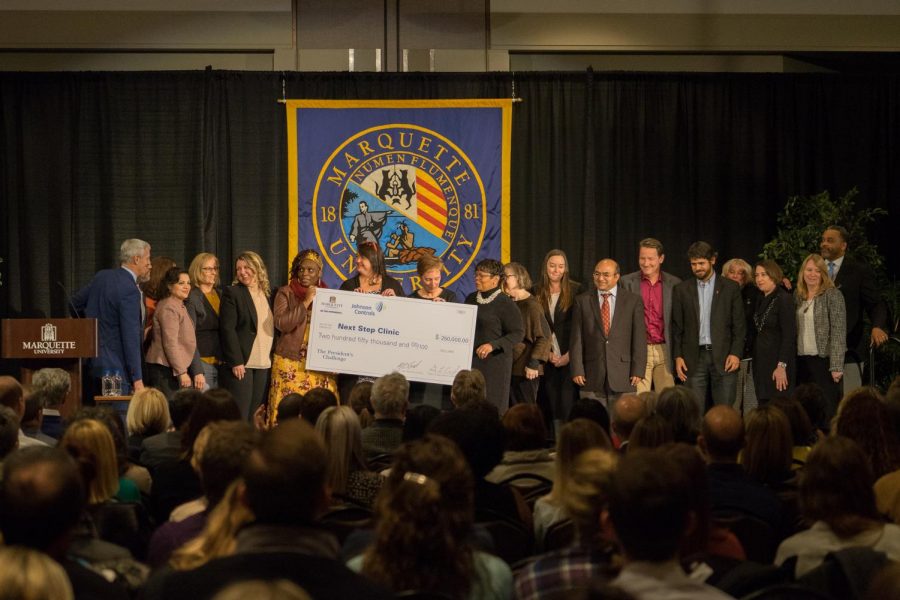 The next step clinic was the recipient of the President's Challenge award at President Lovell's address.

Amy Van Hecke, associate professor of psychology, and her team were awarded $250,000 for the Next Step Project as the winners of the President’s Challenge, which was announced during Marquette University President Michael Lovell’s presidential address Jan. 23.

Hecke said the Next Step Clinic seeks to address the issue of delayed diagnosis of developmental disabilities like autism, mental health concerns and trauma of children and families in Milwaukee.

“When a child is developing, you don’t want to wait a year to address these (mental health) problems,” Henke said.

Mary Carlson, clinical associate professor, said long waiting lists to receive a diagnosis for a developmental disorder from psychiatrist have a negative impact on a child.

“Their entire life trajectory is changed,” Carlson said. “They will never achieve as much as they could have if the intervention and treatment occurred much earlier.”

Leah Jepson, project director of the Milwaukee Coalition for Children’s Mental Health at Mental Health America of Wisconsin, is a part of the Next Step project. She said issues with delayed diagnoses and misdiagnoses are especially prevalent in Milwaukee.

“Significant racial disparities exist in the identification and treatment of child developmental delays or disorders, including Autism Spectrum Disorder and social-emotional concerns,” she said.

Hecke said she was frustrated by how some physicians are negatively impacting children’s lives by doubting their ability to grow or improve.

“It’s always hard dealing with the anger of when a family has been treated so badly, like when a family comes with a child who is 8 or 9 and they have been so dismissed their entire lives,” Hecke said.

“The Next Step Clinic wouldn’t be without this gift allowing for the formation of it,” Krueger said.

The Next Step Clinic needed to have its own established space, Krueger said. The award is going toward hiring staff for the new location. According to the BizTimes, the new location is an empty space at The Next Door Foundation’s headquarters in the Metcalfe Park neighborhood. This clinic is separate from the speech services that Marquette provides out of Cramer Hall. Currently, the Speech and Hearing Clinic provides services like speech and language evaluation, hearing evaluation, auditory training, providing hearing aids and other custom earpieces.

“As much as we would like it not to be, some families feel that Marquette is an intimidating place,” Krueger said. “There isn’t always that same level of trust, but the Next Step Clinic has the benefit of being right there in the neighborhood.”

Hecke said the process of applying and working toward the grant took more than a year.

“There were several networking events that we had to attend, but we stood out early on because we had a well-defined team,” Hecke said. “The process was really helpful for filling in gaps.”

Jepson said having so many different team members working on the project will help better meet the needs of families with young children.

“It’s an opportunity to leverage their different sets of expertise and skills to collaboratively address a service gap and systemic need in Milwaukee,” Jepson said.

Krueger said she is proud that the team members are so closely linked to the community and committed to the project.

“We will be able to reach children with developmental and or mental health issues who might not otherwise be identified,” she said.

Many more services, such as providing diagnoses so families can get proper treatment elsewhere, will be provided because of the increased workforce the grant allows, Hecke said.

“What we’re able to do with the money is to hire staff, (and) that’s what you need (for) the professionals to be able to serve them, and we’re going to be able to multiply that by training students to do the same,” Hecke said.

Norah Johnson, associate professor of nursing, said Hecke’s tireless leadership serves as an example of how persistence pays off.

Children will be able to become the fullest version of themselves thanks to the gift, Carlson said.

“Lives are (going to) be changed,” Carlson said. “It’s most exciting because it will make children and families’ lives better—there is no question about it.”