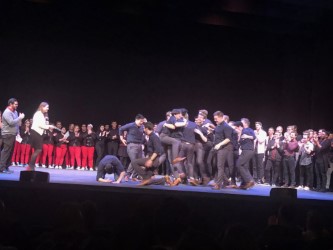 The Naturals celebrate their ICCA quarterfinal victory in Chicago Jan. 26. Next they will have to prepare for the semifinals in Chicago March 16. Photo courtesy of Twitter

On the stage of Chicago’s Athenaeum Theatre Jan. 26, The Naturals, Marquette’s all-male a cappella group, waited anxiously, heads bowed and hands on each other’s shoulders, for the results of their International Championship of Collegiate A Cappella quarterfinal.

“It felt like 10 minutes were going by, waiting (for the judges) to say the first-place team,” Danny Pankow, a senior in the College of Communication and president of The Naturals, said. “I don’t know, I just … I think I blacked out.”

And then the judge announced that the quarterfinal champion was Marquette University’s The Naturals. The students erupted into celebration.

“When she called our name we all ran out to the middle of the stage, and a couple of us fell to our knees. I think I was — I know I was — sobbing,” Pankow recalled. “I don’t know, that was probably the happiest moment of my life right there, so I’m never going to forget that.”

The Naturals are no stranger to ICCA. The group has competed in the collegiate competition for the past five years. ICCA, according to its website, is the same competition portrayed in the 2012 film “Pitch Perfect.” To be considered for ICCA, university a cappella groups have to send in audition videos. If accepted, they are placed into a quarterfinal of typically 10 universities in their region. Each region has three to five different quarterfinals. The top two teams of each quarterfinal in the region then compete against each other in semifinals.

Then, the sole champion of each region’s semifinal moves on to ICCA finals, which features a cappella groups from universities all over the United States. One additional group is chosen from the United Kingdom, where only a single semifinal — no quarterfinals — takes place. Second and third place runners-up at semifinals have the opportunity to compete in the video-submitted Wild Card round, and the winner of that additionally gets to proceed to ICCA finals.

As quarterfinal champions, The Naturals will be heading back to Chicago March 16 for the Great Lakes Semifinal, held at the Auditorium Theatre of Roosevelt University. The Auditorium Theatre seats 4,000 audience members, Pankow said, and the semifinal will be sold out.

Dan Ostrander, a fifth-year senior in the College of Engineering, is the only member of the group who has attended ICCA with The Naturals every year they have been involved.

The Naturals advanced to the semifinals only once before, in 2015, the very first year they competed in ICCA. Ostrander was a freshman. The group had an easier time at the quarterfinal that year, he explained, and they took second place. In subsequent years, The Naturals have competed in quarterfinals Ostrander found to be at a higher level of competition.

Coming offstage this year, The Naturals knew their performance went well, Ostrander said. The ensemble’s 12-minute setlist featured “Nina Cried Power” by Hozier, “I Wouldn’t Be” by Kodaline and “Say Amen” by Panic! At The Disco.

“(The) most memorable part was, I think, after the performance, we all left and went back to our dressing room — and we had to be quiet because the dressing room’s right underneath the stage — but we all were jumping up and down and celebrating,” Ostrander said. “And I just started bawling, because I had to think like it’s possible that that was my last time ever performing at ICCA, and I was just so happy that that was the way it could possibly end.”

“We had only about two weeks of the semester to pull everything together, as opposed to six weeks,” Ostrander said.

To best prepare for its early competition, The Naturals developed a rigorous schedule of rehearsals. Over winter break, each member practiced independently and submitted recordings of himself singing his own vocal part. Then they all came back to school a few days before the semester began for intensive rehearsals, a sort of a cappella boot camp. They then had rehearsals every day for the two weeks leading up to the quarterfinal.

Ostrander, Pankow and Alex Kulp, a freshman in the College of Arts & Sciences, said they all gave credit for the Naturals’ motivation to their music director Jimmy Oddo, a junior in the College of Business Administration. Oddo, the students said, pushed every member of The Naturals to learn their music over break and work hard putting it together once they returned to campus.

“We’re not taking lightly the fact that this may be the first time that we won quarterfinals, but it’s definitely not going to our head,” Kulp said. “We’re still working really hard to continue polishing, to make sure our voices are exactly where they need to be.”

Pankow said the group has discussed their goals moving forward to semifinals. They aim to continue pushing themselves to do the best they can in the competition, and they are shooting to advance to finals.

At the same time, Pankow said, the Naturals recognized that semifinals will be an extremely high level of competition.

“At the end of the day, we just want to make sure that we make a name for ourselves so the people around us know who we are,” Pankow said. “We want to have fun with it and … enjoy it while it lasts.”

“This is for Marquette,” Kulp said. “We’re really excited to have done well, and we hope we can represent Marquette really well in the future.”