P is for Pretty 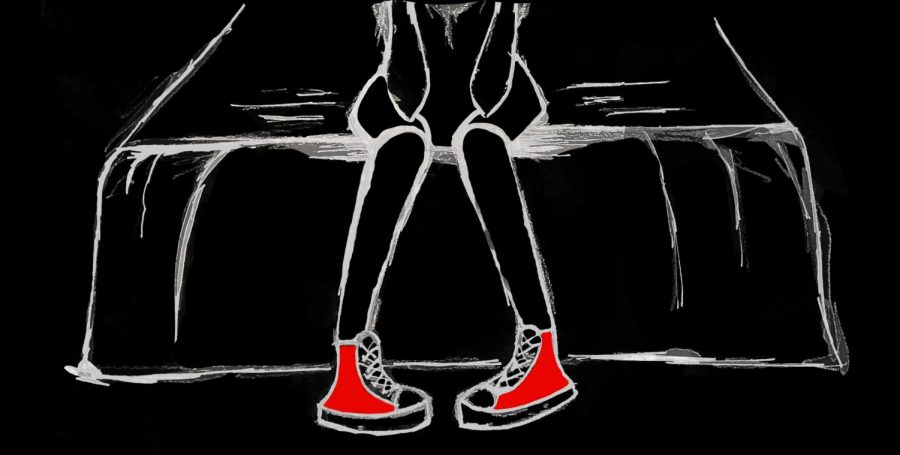 It was there as much as I was, except everything within me knew I shouldn’t have been there. It knew its place. I knew where I was sitting, too, on a bed with quilts and pillows left behind for the wash. It sits on the nightstand underneath the TV that tries to make the room look new, but it owns the place as much as he did. It was wrong as much as it was right, it being there. Just there. Me, being there.

The room is carved from the ’70s, stuck in a world far away. Mustard lights and square blankets, a white bathtub that screams for privacy guarded by a door that will never be shut unless he closes it. I sit on the bed, on the edge of the past, on the ledge hoping for a better tomorrow.

I was his target.

My arms are weak. My eyes are tired. My stomach is scarce and my voice is gone. I didn’t want to ask for anything. There’s food off to the side, not for me unless I earned it. My ears bleed from the noises, from the words, from the boisterous smiles that deceived me into believing I was something more than a girl on her way home from school. My body is numb. My body is hurting.

I stare at the trigger, across the carpet with stains and too many footprints to count how many of us there are. My footprints are there, embedded in the ground like they’re waiting for me to fill their place. Nothing else matters, though. Not now. Not even the silent tears breaking the floor from the girl who just finished her round. Not even the scraping of voices, the clash of wants making themselves known like the stars in the pitch black of night. Nothing else matters right now.

Its metal stiffens, its gunpowder teases as I can feel it tighten my throat again. The worry of its trigger releasing, the fear of his hand slipping.

The fear I won’t be able to see the neon lights again.

I don’t want to leave them.

I stare and remember everything.

Life isn’t fair, but it is good. I know that now, anyways. I have a bed and warm blankets that keep me safe at night. I have people who want to love and give for me, but I push them too far outside of my world before they can even try to be in it again. I have food an arm’s length away, a voice to speak and a life to truly live. Sure, I’m not happy all the time. I’m not grateful for everything, always wanting more than I or my family can afford, but now, I know I have everything in this world. I have it all.

That was then. This is now.

I had so much hope before a hotel room off the highway sucked it all away.

He tells me I am pretty.

But he really tells me.

I feel it when he tells me, too. He spells it out for me and makes me understand what the word actually means. He makes the world know it, too. The way he came up to me in the middle of the aisle, a sly look disguising his crooked smile, his dimples too deep to dig himself out of the mess he is making. Yet, he told me, his hands caressing my face, his green eyes lighting up my world and daring me to tag along. He offered to buy the candy, two if I really wanted. It was just some stupid gummy I was craving for over a week and finally got the allowance to buy. I stood in the aisle staring at the sweets, wanting to go in and out as fast as I could just to rip the bag open. But instead, I walked in and saw him. It was like he knew I was there. He knew I was coming.

I wasn’t that pretty. At least, not now anyways.

I have scabs and bruises in places I never knew I could get, in the places my childhood has yet to leave, my innocence still intact. My hair is fried from straightening it too much, from making it look the way he wants. Sleek and shiny hair on a girl who is slim and just starting to announce her curves. That’s what he wants. And that’s what he got.

He carved a letter P close to my heart just so I would know. Not that I was “pretty,” but to know that I was his.

That I am his pawn. That I am being trafficked.

My body is too numb to even be human anymore.

Blisters, though, are my scars that tell me I still have hope. That I am not attached to this enough. That I can hang onto one more night dancing and earning and crying and lying and being someone I am not.

By not bleeding, I’m not giving in. I know I can get out.

Besides, I have the neon lights waiting for me.

I stare and remember where I was, who I was. The girl I used to be. The girl who walked into that store who knew who she was, where she was going.

I stare and remember everything he has done, the echoes and the noise around me too loud to even hear. I stare and dream of never seeing anything like it again.

This girl that I am.

I stare and know there is a way out.

That’s what P stands for.

It’s funny. Being something you can believe in.