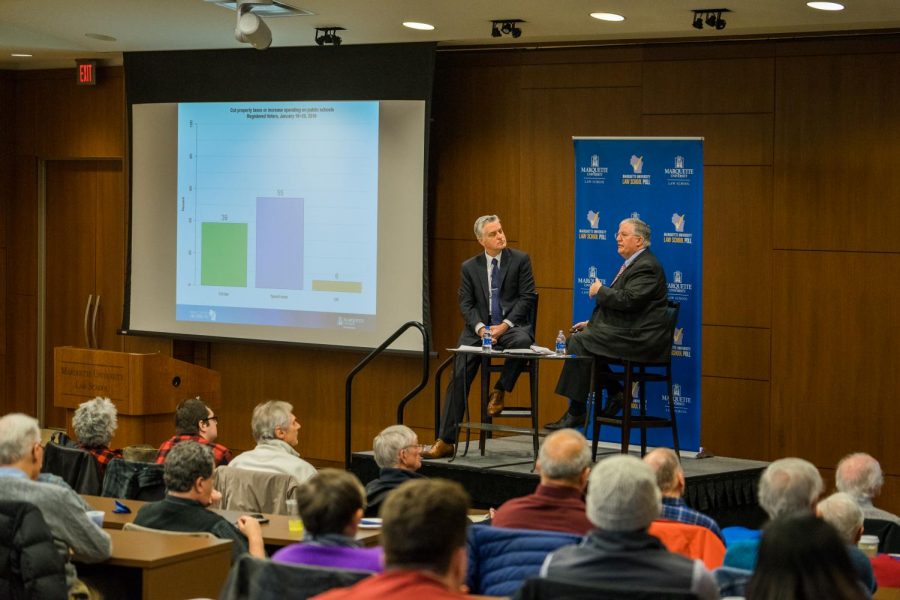 Marquette Law School poll director and professor of law and public policy Charles Franklin revealed the first statewide poll results since the November elections Thursday during “On the Issues with Mike Gousha.”

The poll surveyed public opinion on statewide topics such as healthcare, school funding, taxes and spending priorities. It was conducted Jan. 16-20.

In regards to health care, the poll addressed whether the state should accept federal funds to expand Medicaid or BadgerCare.

Sixty-two percent of voters said they would be willing to accept federal  funds to expand Medicaid.

Franklin said these two health care issues —the lawsuit against Obamacare and funding for Medicaid— as had a split between both political parties.

The poll also revealed a majority of Democrats are in support of increased funding for schools. Seventy-three percent of voters from both parties favored state aid for special education in public schools.

The poll revealed a majority of voters are against the increase of gas taxes.

“While many topics have a definite split between Democrats, Republicans and Independents, there are a few (topics) that have proven to be a surprise,” Franklin said.

Among these topics fell the issue of non-partisan commission redistricting, which had 72 percent support across the board. The current system allows the majority party of the state legislature to draw distinct lines.

The legalization of marijuana question revealed a 59 percent support overall.

“Fifty-nine is a lot … there has been a real change in the last couple years in national polling using this topic and whether it is a good idea or a bad idea, it is something that has significantly impacted public opinion,” Franklin said.

The poll also discussed other national issues. It revealed 51 percent of individuals opposed the construction of a border wall between Mexico and the United States. Sixty-six percent opposed the government shutdown altogether.

However, Franklin mentioned the public was split among parties on who they were blaming regarding the shutdown. Forty-three percent blamed President Donald Trump.

Franklin said about 800 people were surveyed with a margin of error of 3.9 percent. Sixty-one percent of these interviews were conducted via phone calls.