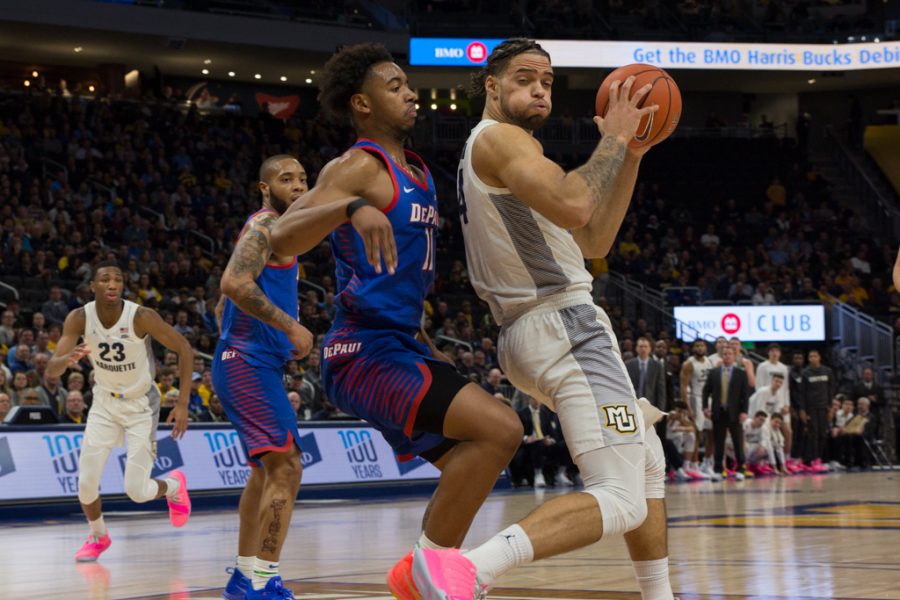 In most games this season, no threes and eight turnovers from star guard Markus Howard would ground the Golden Eagles.

“If you told me that we’d have a game where Markus Howard didn’t make a three and had eight turnovers, I’d say you have a great shot to win,” DePaul head coach Dave Leitao said.

Theo John made sure that wasn’t the case Wednesday night, scoring 16 points, 10 rebounds and six blocks to help No. 12 Marquette outlast DePaul 79-69.

“Theo gave us an unbelievable physical presence on both ends of the court,” Marquette head coach Steve Wojciechowski said. “Defensively that’s becoming a consistent theme for him. … On the offensive end, I thought this is as strong as he’s played. He played like a man.”

John entered play averaging 6.2 points and 4.6 rebounds per game. His 16 points were a season high, and his 10 rebounds and six blocks were one short of his season highs.

“I’m not saying Theo needs to get 16, 10 and 6 every night, although I think everyone would agree we would take that,” Wojciechowski said.

He had some help from junior forward Sam Hauser, who had 16 points on 6-for-11 shooting. Hauser and John were two of Marquette’s four starters to finish in double figures.

Howard, who leads the BIG EAST in scoring, did not hit a three Wednesday night. However, he did plenty of damage from the free-throw line, knocking down all 15 attempts.

“(Howard) has kept me up (at night) since Saturday’s game every night,” Leitao said. “Just trying to figure out how to best keep him off balance. We did to a stretch, but his intellect can make a play, and he drew fouls.”

Howard didn’t have many opportunities to score elsewhere, going 1 for 3 from the field in the second half. He averaged almost nine 3-point attempts entering play but only took two treys.

Wojciechowski praised his passing, but his eight turnovers was the second highest mark by a Marquette player this season. Howard had the most against Creighton, when he had nine turnovers.

“He’s still a developing player,” Wojciechowski said. “We all forget that. He’s still learning, and he wants to learn.”

Turnovers were a team-wide issue, as the Golden Eagles committed 19 turnovers.

“We have to clean up the turnovers obviously,” Wojciechowski said.

The win did not always seem so much like a guaranteed result, though. DePaul had a 16-12 lead about midway through the first half, and Marquette’s offense was anemic offensively. The team missed 15 of its first 18 shots and had five turnovers in the first nine minutes.

Howard had three turnovers by the 8:55 mark in the first half.

“Turnovers has been something we need to get better at. It’s crept up at different times in different games,” Wojciechowski said. “It just happened to be the start of the game (and) start of the half here. I don’t know why that was the case today, but it was.”

DePaul also crept back in the second half with an 8-0 run after halftime, but Marquette silenced the comeback with hot shooting at the end.

Free-throw shooting helped Marquette secure the win. The Golden Eagles were 28 of 32 from the line. Howard and the Hauser brothers were especially effective on free throws, combining to shoot 24 for 25.

“We’ve been a good free-throw shooting team,” Wojciechowski said. “In general, when (Howard or the Hausers) are at the line, you feel pretty good.”

With the win, the Golden Eagles move to 14-0 at Fiserv Forum and has won their last four games by 12 points or less.

Marquette (17-3, 6-1 BIG EAST) will have a quick turnaround, going to Xavier Saturday afternoon in the first part of a two-game road trip. Marquette is 3-7 against Xavier in the Wojciechowski era but won 70-52 earlier this year against the Musketeers.