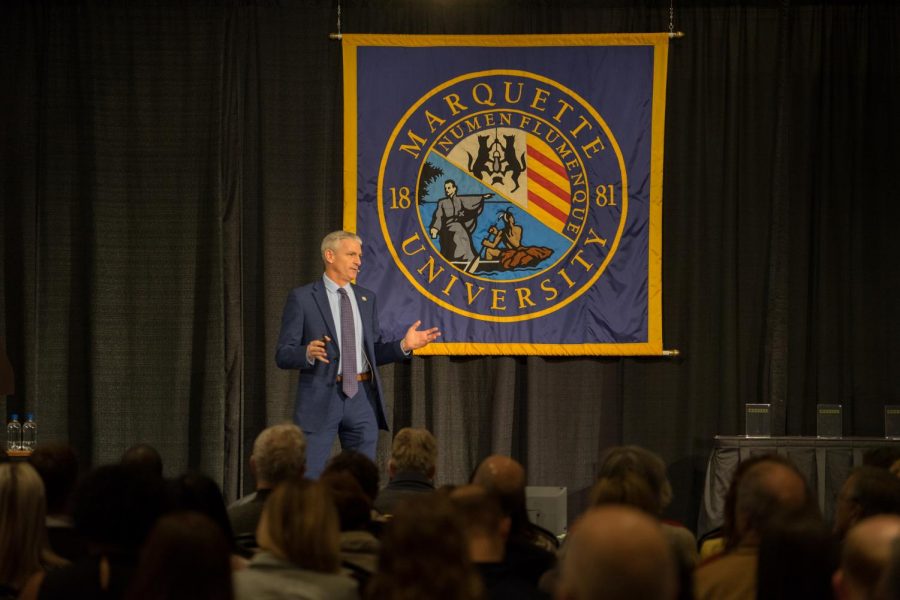 “I always like to start with a segment called Difference Makers,” Lovell said. “What difference makers is is identifying some extraordinary people on our campus whose actions or initiatives have helped an individual, a group of people or helped a community organization in a large or small way.”

Lovell gave a Difference Maker Award to Katie Simet, assistant director for academic service in Intercollegiate Athletics. The award was for her work with the nonprofit organization Courts for Kids, which built a basketball court in Costa Rica for children.

Angela Shultz, assistant dean for public service at Marquette University Law School, was awarded for her leadership of the Milwaukee Justice Center.

The third award went to Malaina Moore, a junior in the College of Communication, for her original play “White Privilege,” which was selected for the regional Kennedy Center American College Theater Festival in Madison.

Lovell went on to talk about the landscape of higher education.

“Higher ed is facing some significant headwinds, and those include things like the economic forces, technology advances, online disruptions, changing demographics of the student population, some non-traditional competition entering the education space and the obsolete physical assets which we have on our campus,” Lovell said.

Lovell said there is a low net tuition revenue because of the concerns over returns of investments on education. He said that higher education is going to cost more to operate, which can have a negative outlook on higher education overall.

“When we talk about what we are trying to accomplish and achieving Beyond Boundaries, we talk about thinking differently, acting differently to be the difference,” Lovell said. “We still want to transform students’ lives, but we know we have to evolve and change because of the forces acting upon us.”

Lovell said 2018 was a record-breaking year. Marquette welcomed the biggest freshman class ever and hired 73 faculty members, he said.

Lovell recognized Kevin O’Finn, a sophomore in the College of Arts & Sciences, for his product Headphones+, which are light up headphones he created with help from the 707 Hub.

“I was able to invent (them) at Marquette University and get them on the market,” O’Finn said.

O’Finn announced a giveaway of 10 sets of his wireless headphones that light up to the beat of the music. The sets were underneath audience members’ chairs.

Lovell also talked about the fastest-growing sport in the world: esports.

“All of us may not understand this phenomenon, but it’s happening,” Lovell said. “What we’re very excited to announce today is that Marquette esports will be the first in the nation to be run by a major conference Division I athletics program.”

Esports is a world of video gaming, but mirrors that of a traditional sport with team model benefits like leadership development, teamwork and communication.

Additionally, the new Institute for Women’s Leadership will launch in summer 2019 and will focus its efforts on research, leadership development programming and networking opportunities related to women’s leadership topics and gender equality in education and the workplace.

“We are very, very proud to be launching this institute at Marquette and going back to our roots of supporting women in achieving their goals and their dreams,” Lovell said.

The Thomas J. Rolfs Family Foundation gifted $5 million, which will be overseen by Marquette’s Office of Research and Innovation.

To conclude his address, Lovell awarded the first winner of the President’s Challenge to Amy Van Hecke, associate professor of psychology, for her work with faculty from Marquette in nursing, education, counseling psychology, computer science, communication, psychology and speech pathology and audiology. The award was for their work on the Next Step Clinic: A Partnership Targeting Mental and Developmental Health for Milwaukee’s Underserved Children and Families.

Van Hecke was awarded a $250,000 grant for two years that will seek to change the trajectory of lives in the community by addressing one or more of the critical areas in which inequities exist, including health, education, safety, housing, transportation and economic prosperity, according to a news release.

Lovell then listed events coming to campus, which were created based on student suggestions. This included a president panel on diversity and equity Feb. 26, as well as a Beyond Boundaries community conversation March 18.

“These are all opportunities for us to have dialogue and discuss issues directly facing our campus,” Lovell said.