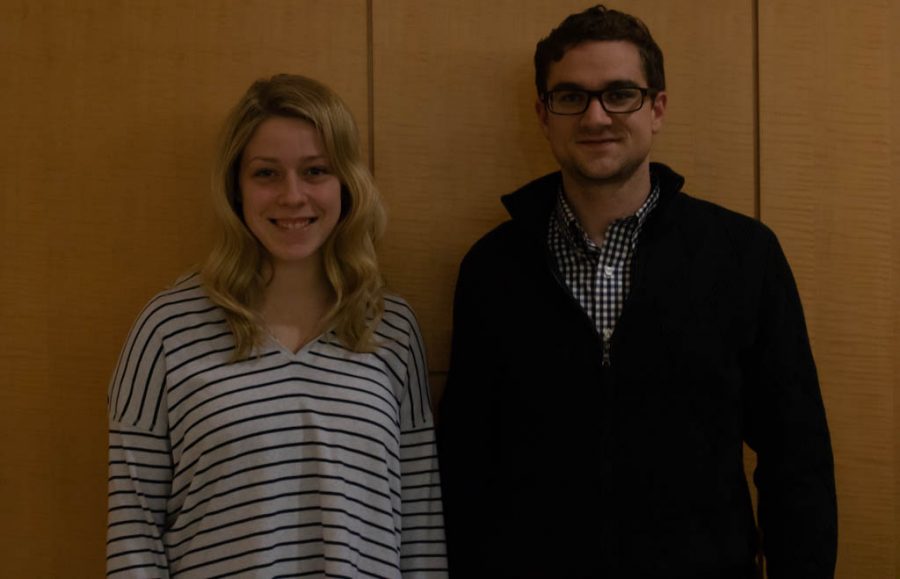 Owen Raisch and Kat Christian are both partnered with the Milwaukee Marathon.

The Milwaukee Marathon will return to the city April 6 after taking a break for a year due to logistical issues with measuring proper race boundaries.

Since then, the Milwaukee Marathon was bought by Rugged Races, one of the biggest race and obstacle event companies in the U.S. The company has partnered with Marquette students through the Student-Run Business Program and 1881 Event Productions, an event planning organization founded by Marquette students.

Owen Raisch, associate director for SRB, said it was extremely important for the program to make sure there were no more concerns with the length of the marathon route. The marathon route has been either too short or too long in the past.

“Facilitating an acquisition by Rugged Races was the smartest thing that could’ve been done,” Raisch said. “They’ve put on hundreds of races before.”

According to its website, Rugged Races hosts events that attract more than 300,000 people across the country.

Kat Christian, a junior in the College of Business Administration and president of 1881 Event Productions, said helping produce the Milwaukee Marathon is a great opportunity for her to apply what she learned in the classroom.

“I like that the marathon isn’t a mainstream business and (is) different from regular job opportunities,” Christian said.

“The students will also be learning how to produce a high-quality road race in an urban setting, following a complicated business model with a lot of moving parts,” Scudder said.

Christian said she’s been able to balance being a student and working on the marathon through the help of the rest of her team at 1881.

“In many ways, it really is a full-time job,” Christian said.

Raisch said in the process of planning the marathon, students have witnessed substantial business deals.

“The CEO of Rugged Races was caught in between Mark Cuban and Wes Edens fighting over who would control Rugged Races, and therefore the Milwaukee Marathon,” Raisch said.

Christian and Raisch said they were pleasantly surprised by the interest from the community.

“Initially our goal was 6,000 people but people are signing up for all the races so fast that we raised it to 10,000,” Raisch said. “We’re at about 5,000 sign-ups right now but we expect that number to go up closer to the time of the race.”

Christian said she is excited for the route the race will take through different neighborhoods.

“It goes all over through Milwaukee, giving runners a taste of the different communities,” Christian said.

Raisch said the race could be a catalyst for social justice because the race goes through different neighborhoods that can spread awareness to those communities that need help and could inspire future work within the Milwaukee community.

“We’re looking at programs to connect our student-athletes with local high schools and elementary schools,” Raisch said. “Kids would love to have a mentor like that.”

Above all else, Raisch said what’s important is that the marathon becomes an event of pride for the city. Raisch said that Milwaukee is one major city that doesn’t have a major marathon, something he wants to change.

“It’s an exciting excuse for people to come back to the area and have fun together,” Raisch said.

Christian said 1881 also hopes to hold a competition between Marquette, the Milwaukee School of Engineering and the University of Wisconsin-Milwaukee.

“We’re trying to create an environment where there can be healthy competition (the run) and we can all come together and run through Milwaukee,” Christian said.  “A lot of people don’t think that Milwaukee is a college town but that’s not true, there are four colleges in it.”

Scudder said he has a big vision for the race.

“The Milwaukee Marathon is going to develop into a world-class marathon that will be a source of pride for the community as well as a substantial economic driver,” Scudder said.

As the marathon continues to grow and gain success, Raisch and Christian said Marquette’s student business organizations are growing as well.

“We’re going to be hiring about 40 students for the Student-Run Business program, with plenty of opportunities just as cool as the marathon,” Raisch said. This semester the students will be hired.

“We’re constantly trying to do more events, whether it’s corporate parties, galas, conferences — really anything our clients need we will work to provide,” Christian said.