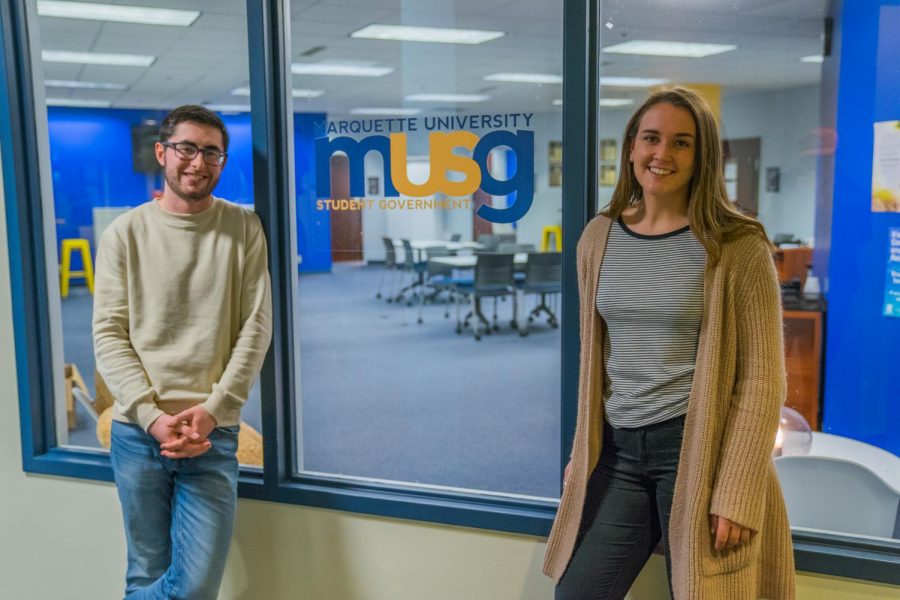 Marquette University Student Government is kicking off second semester with new initiatives aimed to bridge the gap between students and administration.

Legislative Vice President Dan Brophy said he hopes to accomplish more concrete initiatives in the coming months. He said he specifically wants to focus on finding out what students want to see from their representatives.

“We need to brainstorm, as an organization, ways to get hard data on what students actually want,” Brophy said. “There’s a gap between what we do and what students want, and we need to be able to fill that gap and that’s an ongoing process.”

Brophy said senators may try tabling or attending Community Programming Council meetings to get a feel for what their constituents want.

Student senator Kevin O’Finn, a sophomore in the College of Arts & Sciences, said he wants to work on legislation to change the visitation policy in the residence halls.

“We have been working hard on it so far, so hopefully we can pass it,” O’Finn said.

However, Brophy said this might be a long process.

“One of the things we have to remember is a lot of change all at once is sometimes tough for a university,” Brophy said. “But at the same time, having heard already just from a few students on campus, there’s clearly a student demand for that and that’s kind of where MUSG fits in.”

Gillespie said part of the problem is that LGBTQ students may feel ostracized by the current visitation policy. Gillespie said her understanding of the current policy is that it is the assumption that students identify either as a woman or man, rather than taking into account folks who are non-gender conforming by creating a gender-neutral housing system. Under this system she said students would feel safe and free to identify as they please, rather than having to conform to an identity.

“Other Jesuit institutions, like Seattle University, have pursued some gender-neutral housing options,” Gillespie said. “So that’s something that we can also present and discuss in this conversation, especially when it comes to making students feel safe on campus.”

“Part of the things we’re going to be doing surrounding contraception is trying to get hard data from students on what they need and want out of that type of resource, and hopefully presenting that to administration,” Gillespie said.

Gillespie said MUSG understands that some things won’t necessarily change within the next couple of months, but she hopes data collected can help student senators in the future.

All of these goals have a common theme: making sure students have a path for their needs to be addressed at an administrative level, Gillespie said.

“That’s somewhere where MUSG fills a huge gap in the university,” Brophy said. “It’s about how we help students get to the administrative table, and that’s something that I think we did really well last semester and will continue to do this semester.”