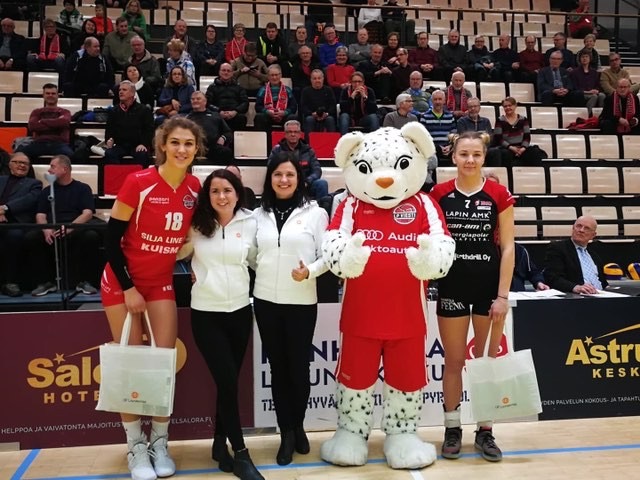 The Marquette volleyball alumna began playing the sport at 14, but she did not start competitively until two years later.

“I find myself still chuckling as I go to work,” Rosenthal said. “I’m going to the gym and I’m like, ‘This is so cool.’”

She began her volleyball career at the professional level with LP Viesti in Salo, Finland Dec. 23. Rosenthal said Marquette-caliber teams are equivalent of professional volleyball teams in Europe, which goes against the preconception.

“The physicality of the players is the same, but these girls have been playing twice as many hours of volleyball a day for a lot longer, so they’re a lot smarter,” Rosenthal said.

Despite her delayed start, Marquette head coach Ryan Theis said he was not necessarily surprised by her success.

“I thought the middle of her freshman year that she was going to be a pretty special player,” Theis said.

It was not always quite so easy during her freshman year, though.

“The speed of the game was way too fast. When we would do a drill, she only got to play like 25 percent of the time in 6-on-6 play,” Theis said. “From that, to where she is now is one of the largest growths of any player I’ve ever worked with.”

“Hopefully all of those lessons that took five years to learn, I can condense (them) now and find the stride of (professional) life a little bit quicker,” Rosenthal said.

Rosenthal was a key part to the Golden Eagles’ historic postseason run, which included hosting the first two rounds of the NCAA Tournament for the first time in program history.

“I remember going to Illinois and we had little patches on our uniform,” Rosenthal said. “I just thought, ‘Oh my gosh, there are only 16 volleyball teams playing right now.’ … It was a really, really nice way to end a five-year-long part of my life.”

“The instant my NCAA career was over, the job hunt begins,” Rosenthal said.

From there, Rosenthal signed with LP Viesti in Salo, which is eight hours ahead of her family in Wisconsin.

“It really doesn’t feel that far, but then again I’ve only been here a month,” Rosenthal said.

Other than going to the grocery store, playing volleyball in Finland doesn’t require knowing Finnish. Rosenthal said her whole team speaks English. Although she said her coach doesn’t have the greatest English skills, Rosenthal usually understands what he is saying.

Most of Rosenthal’s teammates are from Finland, but she also has teammates from Ukraine, Russia, Azerbaijan and Estonia. She said she fits right in with players from different countries despite joining midseason.

“I take (the ‘one team, one heart’ slogan) to be completely true,” Rosenthal said. “They welcomed me with open arms. Everybody’s been really, really kind in helping me to adjust.”

Professional volleyball players usually sign one or two-year contracts, so Rosenthal’s mid-season signing was typical for international additions. She signed with Elite Volley for two seasons, from 2018-’20.

Rosenthal said training is different from collegiate athletics. LP Viesti has “double days,” meaning the team practices at either 9 a.m. and 3 p.m. or 11 a.m. and 8 p.m. Each player has sponsorships on her jersey. A local hotel sponsors Rosenthal.

“I feel like a NASCAR (racer) with all these sponsors,” Rosenthal said. “I’ll go, I’ll practice and there are three of us sponsored by this hotel. So we can eat lunch there, which is great, take a nap and go back to practicing for the evening training session.”

It didn’t take long for Rosenthal to make headlines in Finland, as the team nominated her as the most valuable player of the match in her rookie debut with LP Viesti. She totaled four blocks and five aces in the victory.

“I was totally surprised,” Rosenthal said. “I had a really awesome 10-point service run. … Because Salo is such a small town, they’re really proud of their sports teams.”

The day after the Illinois match in the Sweet 16, she was on a plane to Tokyo for a vacation before her professional career began.

Since Dec. 8, Rosenthal hasn’t been back to Marquette. The last time she was at the Al McGuire Center was at the team’s send-off prior to the Sweet 16.

“Now I think that’s kind of special because that’s the last (I) saw of the place for a long time,” Rosenthal said. “I really wish I would’ve had that time to say goodbye to everyone that had been so important to me in my time here.”

“When she left, I gave her a hug and said, ‘There’s parts of you I’m going to miss.’ I laughed because there’s parts of any kid that drives you nuts. She said, ‘Same thing to you,’” Theis said. “That’s the relationship we have. We can be sarcastic (and) we can be fun with each other.”

In his 11 years of head coaching experience, Rosenthal is the first player Theis has mentored for a full five years. She said she was also a first-generation college student.

“There’s some parenting involved,” Theis said. “In terms of the volleyball world, her parents don’t know it. I’ve gotten to be a part of her understanding volleyball culture, to what professional volleyball means, to providing her opportunities to do that.”

Despite graduating in December with a degree in civil engineering, she said her focus right now is on volleyball.

“Even though I am professional now, I still considered volleyball my job (at Marquette),” Rosenthal said. “I wanted to go to the gym every day and earn every cent of that scholarship, which also changed my life. I didn’t want to disrespect Marquette volleyball for doing something like that for me because I don’t know how I would have afforded college without them.”

Though Rosenthal is halfway across the world, she said she will keep in touch with her Marquette coaches.

“We were hoping to catch one of her first games and maybe just put it on in the offices,” Theis said. “I think we’ll see her quite a bit for the next 10 years.”

Since Theis allows former athletes to come back to train on campus in the summer, Rosenthal probably will spend plenty of her offseason where she spent her last half-decade.

“Marquette volleyball has made me into the person that I am, and for that, I am forever grateful,” Rosenthal said. “Marquette isn’t rid of me yet, no chance.”