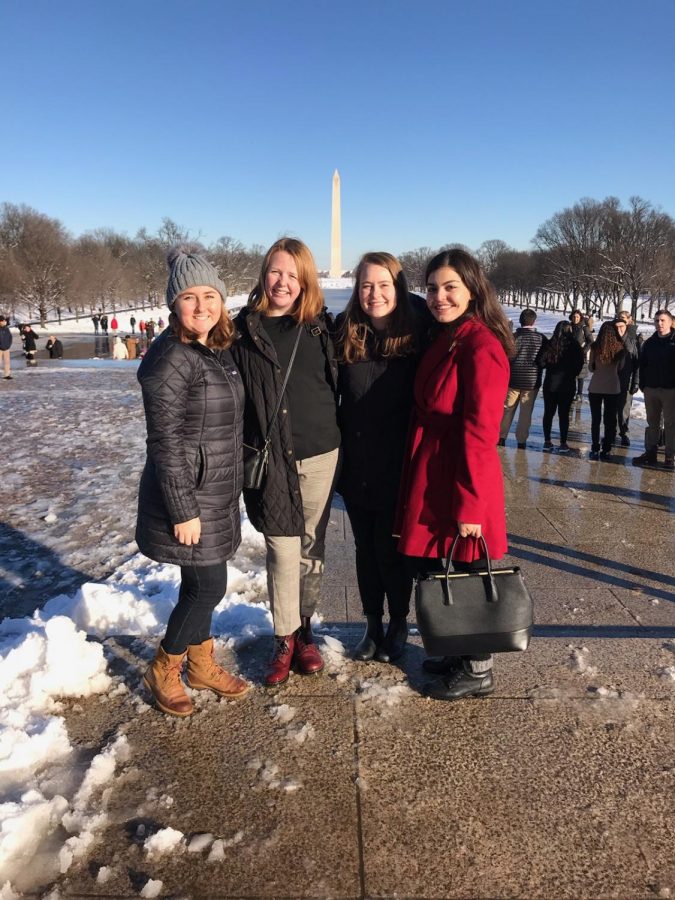 Students stand in front of the Lincoln Memorial during their Les Aspen experience. Photo courtesy of Lily Dysart.

The effects of the longest government shutdown in history are being seen and felt nationwide. But as most Americans receive updates from Capitol Hill through social media, newspapers and television, students in the Les Aspin program in Washington D.C. are experiencing the shutdown firsthand.

The shutdown, which is the 21st in history, began Dec. 22, 2018 after Congress and President Donald Trump failed to agree on a budget for the new fiscal year.

While the shutdown has become a learning experience, some Les Aspin students said it has also been an inconvenience in their daily lives, some said as they have been forced to reschedule plans, trek through snow banks and have lost communication with certain internship sites due to certain employees being out of office due to the shutdown.

Christopher Murray, visiting instructor and coordinator of student programs at the Les Aspin Center for Government, said students are not interning in offices that are shut down.

The program is affected by the closing of public museums, monuments and some federal buildings, Murray said.

Visiting museums and monuments is a part of the curriculum for a course students take called Arts and the Democratic Society, he added.

Since the students have not been able to visit the sites, class has been modified to find other private museums and organizations to visit, Murray said.

For example, instead of visiting the Smithsonian or National Gallery of Art, students have had to visit the Newseum, the Museum of the Bible and the United States Holocaust Memorial Museum instead, Lily Dysart, a sophomore in the College of Arts & Sciences, said.

Dysart is working at the National Parks Conservation Association as a policy intern.

“The shutdown really affects all aspects of D.C.,” Dysart said.

She said her friend had an Uber driver who worked for the government, but had to find another job due to lack of income.

“I think this speaks a lot to the impact of the government shutdown on people’s lives throughout D.C. and the country,” Dysart said. “Seeing it directly affect people’s lives is different than what I would read or learn about through the news in Milwaukee.”

She said seeing the government shutdown firsthand also allows her to see how many museums, parks and monuments receive federal funding and are now closed and unkempt.

“It makes me sad that the leaders of our country are not able to put their differences aside to reopen the government and get people back in their jobs and reopening parks and government services,” Dysart said.

She said she thought the government shutdown would be over by the time she began her Les Aspin, which started on Jan. 10.

Despite inconveniences, she said the experiences she will gain in D.C. during and after the government shutdown will give her a better understanding of the federal government and how it affects the people’s lives.

Murray said he is using the government shutdown as a lesson for his U.S. Congress class.

“I will certainly talk about why the shutdown happens,” Murray said. “But this will be more a matter of emphasis rather than a significant change in course material.”

Paku Nettesheim, a sophomore in the College of Arts & Sciences in the Les Aspin program, said she is frustrated the government shutdown is interfering with her class and daily life.

“When you come here, something you want to see is museums,” Nettesheim said. “It’s disappointing and frustrating to not be able to go to those.”

When the government shutdown ends, the students will be responsible to make time on their own to visit the museums they missed, Nettesheim said.

Nettesheim said she feels like she is a part of history to be experiencing the government shutdown firsthand, but she also said she feels as if isn’t getting the full experience due to last-minute changes to aspects of their program.

“It’s cool to be here for (the government shutdown), but at the same time it’s frustrating because we can’t experience the things that we came out here to experience,” she said.

Nettesheim said another problem she faces is slipping on ice and walking through snow piles because no one is plowing, shoveling or placing salt around the monuments.

“Nothing is really being taken care of,” she said.

Nettesheim is working in Wisconsin Sen. Tammy Baldwin’s office and has not yet been personally affected by the government shutdown at work.

Nettesheim said she is expecting to encounter more problems as a result of the government shutdown, as so many people are affected.

“At the end of the day we just say, ‘OK, we’ll see what happens tomorrow,’” she said.

Eric Rorholm, a sophomore in the College of Arts & Sciences, is interning with a Wisconsin representative and said his agenda for the next few weeks will focus primarily on ending the shutdown. Rorholm cannot say which representative he is working with.

“Experiencing (the Les Aspin program) during the longest shutdown in history is a once-in-a-life, but very spooky, experience,” Rorholm said. “While the experience of being here so far has been absolutely incredible, the fact that most of the government is empty and not functioning is more spooky than anything else.”

He said it feels apocalyptic to be in D.C. during the government shutdown because everything is much quieter.

“It is a fascinating time to be in Washington as the prevailing mood, above all else, is that the government itself has completely failed,” Rorholm said. “The silence is deafening.”