No. 15 Marquette comes back against Georgetown without Howard, Morrow 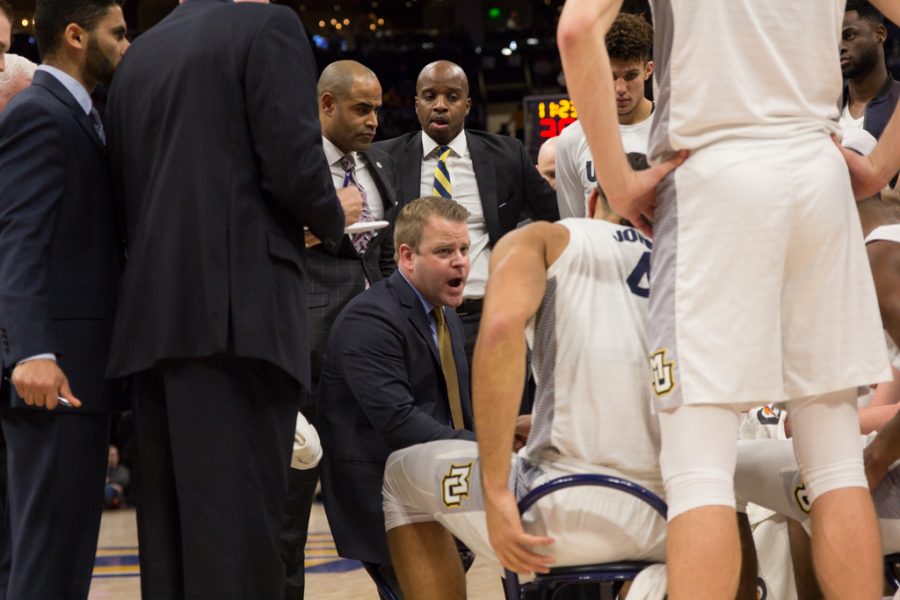 For the third time in one week, No. 15 Marquette men’s basketball tight-roped its way to a BIG EAST win in the final minute, this time defeating Georgetown 74-71 Tuesday night.

The Hoyas had a chance to win in the final seconds. They had the ball with the shot clock off and trailing by one point.

As James Akinjo went up for a shot on the left side, freshman Brendan Bailey leaped to block the shot and send the ball out of bounds. The Hoyas turned to Akinjo to win the game again with about three seconds left, but sophomore center Theo John blocked the shot.

Junior forward Sam Hauser grabbed the rebound and hit two free throws to give Marquette a 74-71 lead with 2.7 seconds left. The Hoyas could not get a shot off in time.

Marquette won without star point guard Markus Howard, who left three minutes into the game with lower back tightness. Redshirt junior Ed Morrow was also unavailable with an ankle injury.

The win did not always seem likely. Georgetown had a 51-43 lead in the second half, and Marquette struggled to find any offensive rhythm.

Then a 17-3 run and a superb performance from Sam Hauser led to a second-half comeback.

Sam Hauser finished with a season-high 31 points on 10-for-20 shooting. That included 4-for-9 shooting from three.

The Hoyas responded to Marquette’s massive run with a 7-0 run later to tie the game at 60-60, but foul trouble and poor shooting doomed Georgetown late in the game.

Georgetown seniors Jessie Govan and Trey Mourning each had four fouls for the last five minutes of the game.

The Hoyas did not hit a field goal in the last 2:51 of the game and missed six of its last seven shots.

Three days after setting a career high in rebounds, John flirted with a double-double, recording 14 points and six rebounds. He only had one block, but that block saved the game in the final seconds.