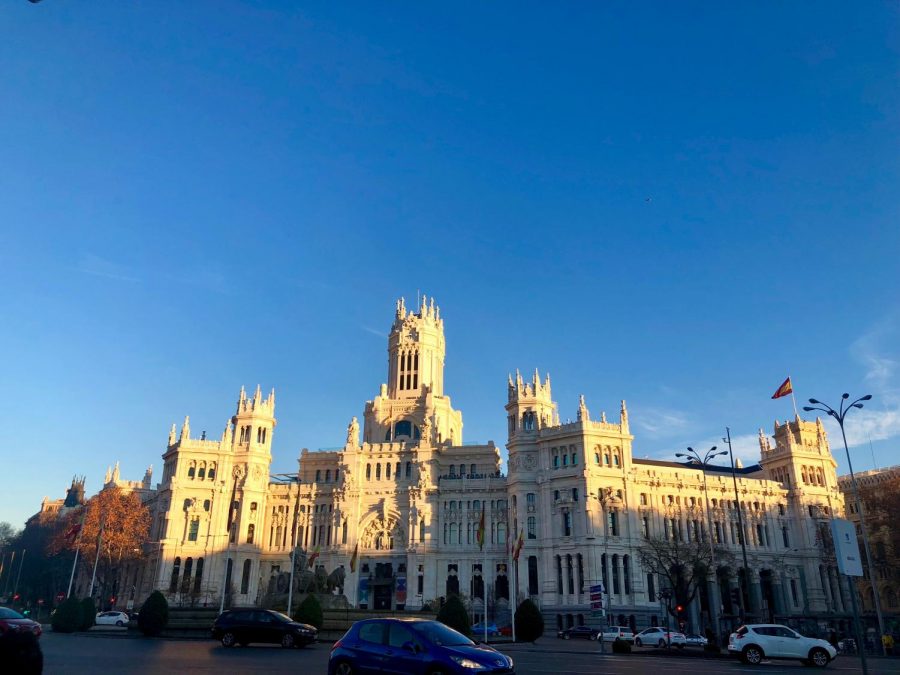 Aguirre shared a photo of Madrid City Hall from her first week abroad.

As most Marquette students step on campus and prepare for a new semester, others are stepping onto foreign ground, thousands of miles away. While beginning any semester requires adjustment, students studying abroad can experience a bit of a culture shock.

Alexis Aguirre, a junior in the College of Education, arrived in Madrid, Spain on Jan. 7 where she will be studying for the semester, but she spent the prior week in Paris, France.

Aguirre spent her first three days in Europe living in a hostel in Paris by herself. She said she did not adjust immediately.

“I was overwhelmed by the big city, the language barrier, not having cell service, and being on my own,” Aguirre said in a text message.

However, finding similarities to cities she had visited in the United States helped Aguirre grow more comfortable in Paris. She packed her first six days in France full of sightseeing. Aguirre visited famous museums, including the Louvre, the Musee D’Orsay, the Musee de l’Orangerie and the Musee Picasso. She also saw the Palace of Versailles, the Eiffel Tower, the Notre Dame Cathedral, the Basilica of the Sacred Heart of Paris, Saint Chapelle, the Arc de Triomphe and took a boat along the Seine River.

Since Aguirre arrived in Madrid a few days later, she has been acclimating to her new home for the semester. She visited museums, tried new food, went shopping and visited El Retiro Park. She said her very first impression of Madrid was that everyone was very welcoming to her.

While Aguirre had travelled outside of the United States before, this is her first experience in Europe. She said the biggest shock of Europe is the history of the buildings and monuments. Aguirre said nothing in the United States comes close to the age of European structures.

Garrett Leverentz, a sophomore in the College of Engineering, also commented on his admiration of the sheer age of European architecture.

Leverentz arrived in Italy Thursday. He spent a few days in Rome then travelled to Florence, where he will be living and taking classes for the semester.

Leverentz said one of the first things that struck him about Rome was the juxtaposition of ancient statues and churches next to new, modern buildings.

Leverentz said he was amazed by the history of the buildings and the fact that people could build the massive structures thousands of years ago.

Architecture has not been the only thing to leave a bold first impression on students. Erin Taylor, a sophomore in the College of Arts and Sciences, arrived in Galway, Ireland Jan. 9. Taylor said the landscape made a strong impression on her.

One of the Irish landmarks she has visited so far are the Cliffs of Moher.

Taylor added that while navigation was initially not easy, the locals she met were friendly and willing to help. Some aspects of living abroad are still tricky, however.

“I’ve found that … trying to find out how traffic works is hard,” she said. “Because if you cross the street, you don’t know which ways the cars are coming because they go the opposite way.”

While not technically abroad, some students have taken the opportunity to study outside of Milwaukee.

Linnea Stanton, a sophomore in the College of Arts & Sciences, is spending the semester at the nation’s capital. As a part of Marquette’s program with the Les Aspin Center for Government, students have the opportunity to live and work in Washington D.C. Stanton and others enrolled in the program are taking three courses and interning with various parts of the federal government.

Stanton arrived in Washington D.C. Thursday afternoon. This week, the Les Aspin students are taking a class that incorporates sightseeing around the capital and familiarizes them with their home for the next few months before beginning their courses and internships next week.

Stanton said the opportunity to live and work in D.C. feels surreal.

“It’s been beautiful so far,” she said. “Even just driving in my Uber from the airport, I was blown away by D.C.”

Stanton expressed enthusiasm for the apartment she is living in. She explained Marquette purchased the apartment years ago when the area was cheaper to live in. But since then, Stanton said, the apartment has reached a value of around 3 million dollars, largely due to its central location.

“All of the houses, or all the little apartments surrounding us are like this super old … New England-esque buildings, and all of the sidewalks are red bricks … it’s very surreal,” Stanton said. “It’s not like anything you would see ever in the Midwest.”