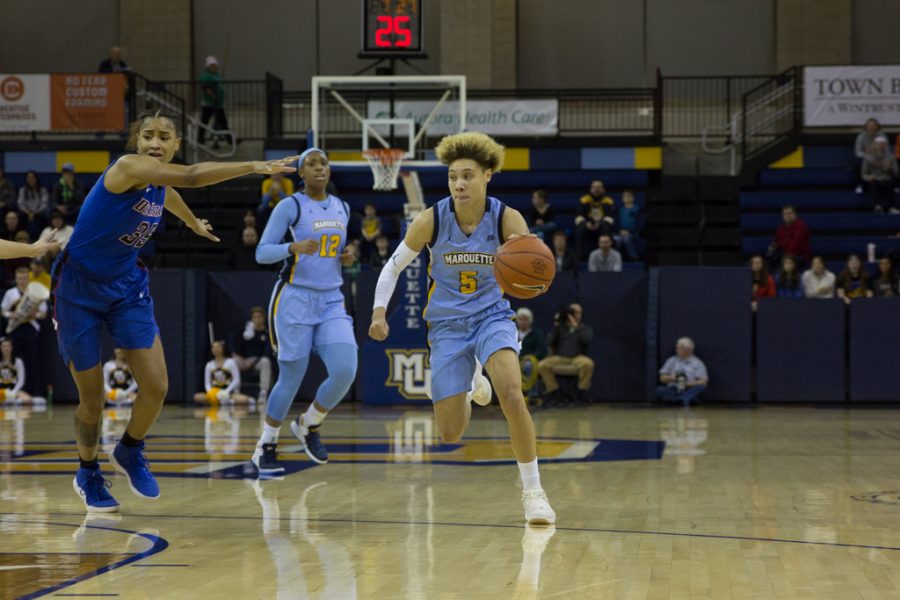 The No. 15 Marquette women’s basketball team is currently 14-3 on the season and 5-0 against BIG EAST opponents. Here’s what ESPN women’s college basketball bracketologist Charlie Creme said about the Golden Eagles’ postseason prospects:

What has impressed you about Marquette so far this season?

“I don’t think I have to create creative ground here when I say that Marquette is an exceptional offensive team. Obviously, with five 1,000-point scorers, this team has scoring threats everywhere on the floor and that is unique. I also have been impressed with what I think is a better killer instinct than the last couple of seasons. Marquette isn’t letting inferior competition breathe.”

How high are the Golden Eagles’ chances of securing a top-16 seed? What will it take for Marquette to achieve this?

“I feel pretty confident that the (Golden) Eagles will end up hosting games. If they continue this pace in the BIG EAST and win the league, they will be in good shape.”

What do you believe is this team’s greatest strength and weakness going forward?

“I mentioned how good the offense is. Eighth in the country in points per 100 possessions is outstanding. Most teams have three reliable scorers. The (Golden Eagles) have five, maybe six because (Selena) Lott has improved. Size is their biggest issue, but with the right matchups, it may not matter as much.”

What differences do you see from this team currently compared to last year?

“Maybe it’s because all the starters are seniors, there does appear to be more of a sense of urgency. I think that has manifested itself in how dominant they have been since the start of the (BIG EAST) season. They don’t appear to be taking any nights off or anything for granted. I think of the Georgetown game a year ago. I don’t sense that is as likely to happen this year.”

Who do you think is the Golden Eagles’ biggest threat?

“Of course, DePaul is always that team in the league, but the way Marquette handled the Blue Demons already has to provide tons of confidence for the game next month and then if they meet again in the (BIG EAST) Tournament.”

What does Marquette need to improve on the most?

“Stay explosive offensively, but do it efficiently. They really have been both for most of this season, so I don’t know if it’s really an area to improve upon. They do need to rebound better against the better teams. They were beaten badly by Mississippi State and Miami. Success in the NCAA tournament will likely depend on being better there.”

What place do you believe the Golden Eagles will finish the season in the BIG EAST conference?

“I think they will place first and win the league.”

Assuming Marquette does make the tournament this year, how far do you think they will go?

“Sweet 16 should be a minimum expectation, especially if Marquette gets a top-16 seed. Under the right matchup circumstances, making the Elite Eight is certainly realistic. Same could be said of the Final Four.”