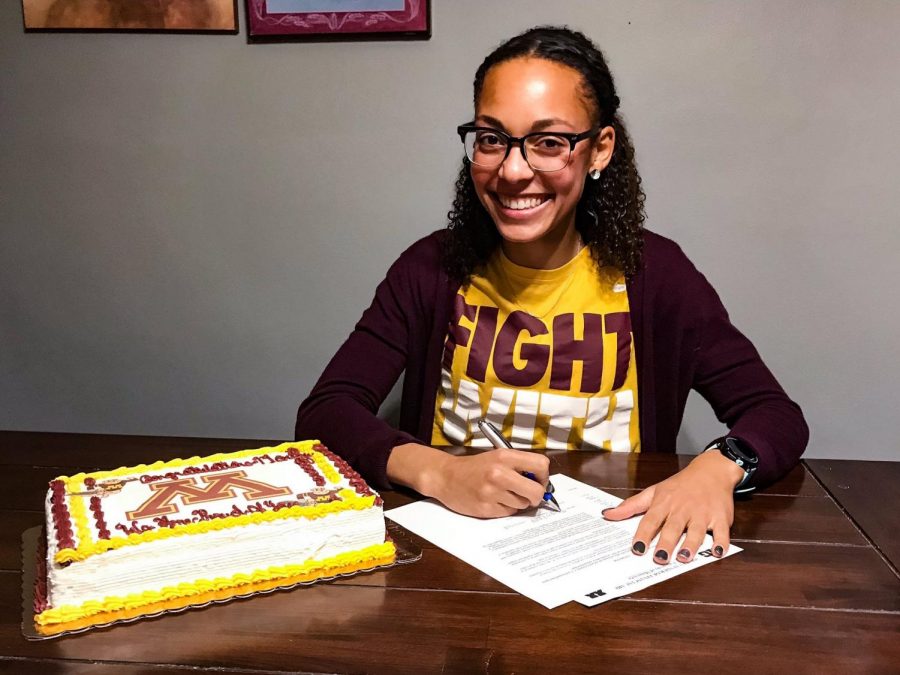 As former Marquette track and field athlete Monique Felix set a personal record to help clinch Marquette’s BIG EAST indoor track title in 2017, she was in tears. She immediately ran to the sideline and hugged assistant coach Rick Bellford.

Bellford picked her up in excitement. Head coach Bert Rogers then embraced her before teammates greeted her.

The record was just one of many feats Felix accomplished for Marquette in three and a half years, which included winning five individual BIG EAST titles and a major speaking role in the 2017 Blue and Gold Fund Auction, which raised more than $625,000 for Marquette Athletics.

“She’ll go down as one of the greats in Marquette track and field,” Bellford said.

However, Felix’s departure from Marquette was hardly as celebratory as her signature athletic moment.

Felix graduated a semester early with a double major in international business and finance and transferred to the University of Minnesota for her final two years of athletic eligibility.

She made the decision in October 2018 due to her own academic interests. Marquette does not have a graduate program in sports management, which was a path Felix hoped to pursue.

“The more I realized I want to work in sports and not in corporate finance, I knew even more so that staying my fifth year (at Marquette) wasn’t in my best interests,” Felix said.

Her initial plan was to complete her senior academic year, but the coaches at the University of Iowa suggested starting early on her visit to Iowa City. She did not choose to attend Iowa, but took the suggestion to transfer early.

“It wasn’t really that easy of a decision,” Felix said.

Back at Marquette, she said her decision to graduate and transfer resulted in worse treatment from teammates, coaches and other athletic department officials.

She said her relationships with Rogers and Bellford, who hugged her after her BIG EAST-clinching high jump two years ago, took a significant hit.

It wasn’t easy for her to tell them her intentions to transfer, so she wrote a letter and read it to Rogers and Bellford.

It wasn’t easy for the coaches, either.

“I’m sad that she’s leaving, and I’m going to miss coaching her,” Bellford said. “She’s going to accomplish great things wherever she goes.”

After she decided to transfer, she had no substantive conversation with Bellford, which Felix and Bellford confirmed — no text messages, no phone calls and no in-person conversations beyond hello.

“(The lack of communication) is really hard to cope with because he’s someone who has been a really important person in my life throughout the last three and a half years,” Felix said.

“I’ve been very focused on getting the current roster ready for their first meet,” Bellford said.

Her father and Bellford did not speak beyond wishing each other a happy Thanksgiving via text message.

Rogers maintained more of a relationship with Felix than Bellford, meeting with her before she left for Minneapolis to wish her good luck and a merry Christmas.

A few days after she notified the coaching staff of her departure, she lost access to team training areas. She could still use the sports medicine facilities to recover from her overuse injury, but she had no access to the team’s locker room or weight rooms. While the rest of the team trained in preparation for the indoor season starting Dec. 9, Felix had to train on her own.

Marquette Athletics spokesperson Scott Kuykendall said each head coach chooses whether to give access to facilities for a transfer, but he said coaches consistently opt against giving players access.

“After I figured out I could graduate (in December) and made that decision, I felt that the coaches should know right away,” Felix said. “In hindsight, I wouldn’t have told them right away because of the negative implications it’s had on my training and everything.”

She also lost the ability to run at the Pettit National Ice Center for free, a perk given to track and field athletes at Marquette.

“Being someone that wants to work in sports, I feel like if you keep the student-athlete’s best interests in mind, that’s the whole point of working in (collegiate) sports,” Felix said. “I didn’t feel like that was happening.”

Felix said she wanted to give the coaches an opportunity to get a mid-season transfer, but Rogers said he opted against using the transfer portal because of the challenges of finding a transfer who would fit Marquette’s program and culture.

The transfer portal functions like a free agency for transfers, allowing student-athletes to enter the portal and have coaches reach out from there.

“On paper that sounds like, ‘Oh you just go find somebody else,’” Rogers said. “But it’s not necessarily really like that easy. For us, it’s always about finding a good fit.”

Felix said she had difficulties finding a place to adequately train at a national level for the remaining weeks of the semester. She looked at several options, including using the University of Wisconsin-Milwaukee’s facilities, but UWM would have required a semester-long membership.

She would lift weights and cross-train at the Helfaer Recreation Center on campus, where the general Marquette community can exercise, but she had to find unusual times to avoid crowds or awkward encounters with former teammates.

“The availability and access weren’t really there,” Felix said. “It was definitely manipulating my workouts to work on equipment when it was available.”

Rogers described the limitations on Felix’s training as “standard procedure” and a way to make sure she isn’t a distraction for the rest of the team. He said his treatment of her wouldn’t differ from any other transfer. Sport administrator Adrienne Ridgeway and Rogers notified Felix of the restrictions a couple days after she announced her decision to graduate and transfer.

“I didn’t really expect to be coached in technical events like jumps, but not even being able to train with the team was kind of shocking,” Felix said.

It also avoided a liability for the athletic department in case she suffered an injury, which then left her potentially more prone to an injury working out independently without professional coaching.

“You’re leaving,” Rogers said. “It’s time for you to move on and get ready for whatever’s next.”

Felix said the coaches at Minnesota anticipated this issue, but she did not see it coming.

Some athletic departments differ with their own policies on transfers. Creighton University spokesperson Rob Anderson said Creighton evaluates transfer access on a “case-by-case basis.” Boston College spokesperson Jason Baum said it “all varies by sport and the specific circumstances of each transfer.” The University of Wisconsin-Madison also determines it on a “case-by-case basis,” per spokesperson Brian Lucas. None of the athletic departments that responded to comment indicated a consistent trend like Marquette has.

As a result of Marquette’s restrictions, Felix drove an hour from campus throughout the semester to her hometown Sheboygan, Wisconsin, to train at her high school. Not having any coaches or teammates to push her until she arrived at Minnesota, Felix’s father trained her. He coached her through high school, so it gave her a chance to “go back to (her) roots.” Felix said his help was critical in the transition.

“That’s hard just driving an hour to get home and an hour back,” Felix said. “It was really inconvenient.”

She said this caused a “significant disadvantage” in her ability to prepare for her first indoor track season at Minnesota.

She continued to work at the Al McGuire Center at the front desk and the ticket office, but after she announced the transfer, pictures of her around the building were taken down. One picture mounted to a wall was covered. Now the pictures sit in her parents’ house.

“We don’t put (a picture of) every front desk person up in the Al either,” Pattarozzi said.

Pattarozzi said he did not believe Felix’s status as a student worker was taken into consideration when taking her pictures down.

“It’s unfortunate, the picture thing,” Rogers said. “It sounds like it was just bad timing. … That’s definitely a bummer.”

Kuykendall said via email the department removes photos from promotional material of any athletes who leave, regardless of sport or level of accomplishment.

“She was the face of Marquette student-athletes,” Pattarozzi said. “She accomplished a lot here, and we’re grateful for that, but it’s like any other student-athlete that leaves or graduates or transfers.”

While the department has rotated some photos, a walk into the Al McGuire lobby shows pictures of famous men’s basketball alumni.

The situation took a toll on Felix’s mental health. She said she quickly figured out which teammates were truly loyal to her in the process.

“This was a new mental strain that I’ve never really experienced before,” Felix said. “I felt really alone.”

Instead of spending time with friends her last semester at Marquette, she was spending extensive time driving or training away from campus.

One of her closest friends through the process was graduating women’s soccer senior Ryley Bugay.

“Ryley was super supportive from the day I went on the transfer portal,” Felix said. “Getting emails from coaches, we’d sit down at dinner and talk about that. … Having her in my life has been really important.”

Rogers and Bellford said neither of them would have done anything differently with Felix’s transfer process.

“Those things are never easy,” Rogers said. “I felt like on my end, I followed the process of how transfer stuff goes. … It’s kind of just how the business is and how it’s supposed to go.”

Despite the “heartbreaking end” to her Marquette career, Felix described her Marquette experience as “overall really positive.” If she had to start her recruitment over again, she still would’ve chosen Marquette, which was her dream school since third grade.

While the transfer decision was based on the sports management master’s degree program at Minnesota, the Gophers have a few other perks. She’s joining a track and field program with a strong track record and sizeable budget.

For every $1 Marquette spent per female track and field athlete on gameday operations in 2016, the University of Minnesota spent $2.04, per the United States Department of Education’s Equity in Athletics Data Analysis. The 2016 figures are the most recent data available.

Minnesota has also finished in the top 20 of the NCAA indoor track championship in six of the last nine years.

“It’s really exciting. It’s definitely a lot to look forward to,” Felix said. “It is a new ballgame being at a power-five conference like the Big Ten.”