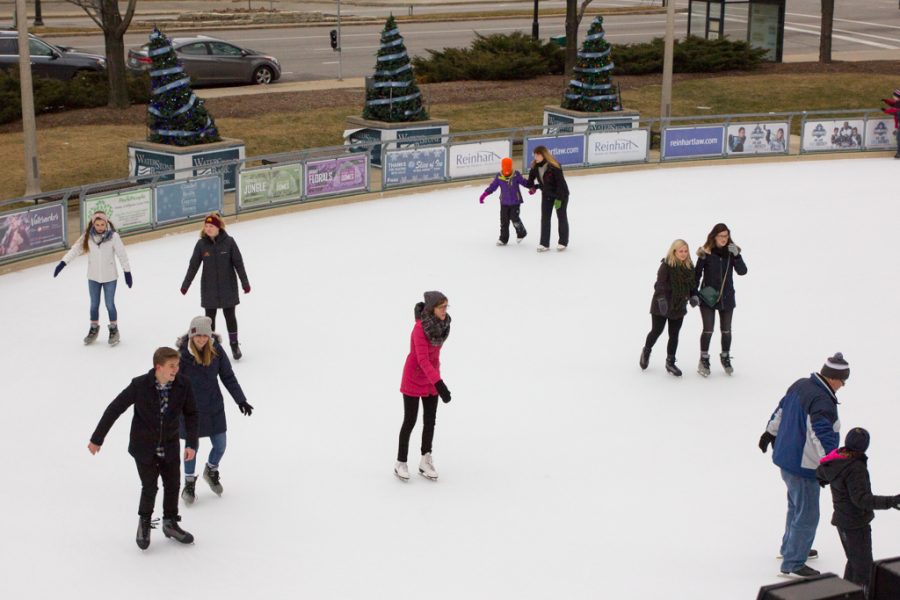 The holidays may be over, but the cold Wisconsin weather is here to stay — at least for now. For those hoping to make the most of the season, Slice of Ice in Red Arrow Park offers ice skating open to the public, right in the heart of downtown Milwaukee.

Red Arrow Park’s location across from the Milwaukee Performing Arts Center sets its ice rink apart from others in the area, allowing patrons to admire the various buildings surrounding the park.

Red Arrow Park is more than just a place to go ice skating. It showcases a 6-foot-tall red granite monument in honor of the 32nd Infantry Division of the United States — also known as the Red Arrow Division. The park opened to the public in 1970 and the ice rink was added in December 1999.

Joe Mrozinski, assistant director of business development for the Milwaukee County Parks, referred to Red Arrow Park as “a little slice of nature in downtown Milwaukee.”

Jordan Janusiak, a freshman in the College of Health Sciences, said his favorite thing about Slice of Ice is that it feels like a winter wonderland in the middle of the city.

Twenty thousand to 25,000 skaters visit this winter wonderland every season, Mrozinski said, and tens of thousands more enjoy Red Arrow Park during the summer, when the ice rink becomes the park plaza. The opening day and closing day of Slice of Ice depends entirely on the season’s weather, but outside of ice skating season, the park is still open to the public, he explained.

Alyssa Goodwillie, a junior in the College of Education, said she enjoys the ability to experience the park.

“I really like that it’s outside and in the middle of the city because I feel like there’s really no other place like that in Milwaukee,” Goodwillie said.

Mrozinski said 2018 surpassed 2017 in attendance rates, and 2019 is on the same trend due to this season’s extremely mild winter.

With the mild temperatures, Goodwillie said she prefers being outside at Red Arrow Park rather than going to indoor skating rinks.

“We do have some underground coils that do keep the ice frozen when the temperatures get into the low 40s, which is very comfortable for skaters,” Mrozinski said. “It keeps the ice conditions optimal.”

Mrozinski said the post-holiday season is an ideal time for ice skating.

“Now that we’re in January and February, it is a great time to go down to Red Arrow Park … (because) it’s not quite as busy,” Mrozinski said.

For adults 18 and older, renting a pair of skates costs $9. Otherwise, ice skating at the park is free. Lockers are available to store valuables while on the ice, and a Starbucks in the warming house sells hot drinks for visitors looking to take a break from the cold. The park is a five-minute drive from campus, or a six dollar Uber ride.

The rink draws skaters of all different ages and abilities.

“We have people who are literally out there on their lunch hour doing dance routines and are experts, so there is no typical skater at Red Arrow Park,” Mrozinski said. “We have everything from toddlers to senior citizens to high school kids on dates.”

On his visit to the Slice of Ice, Janusiak represented the group of  less-experienced ice skaters.

“I went there with my girlfriend and two of our friends, and every lap at least one of us would fall,” Janusiak said. “It was super funny, but it was a good time even if we looked really dumb doing it.”

Goodwillie said that regardless of experience level, all the skaters were respectful and there to have a good time.