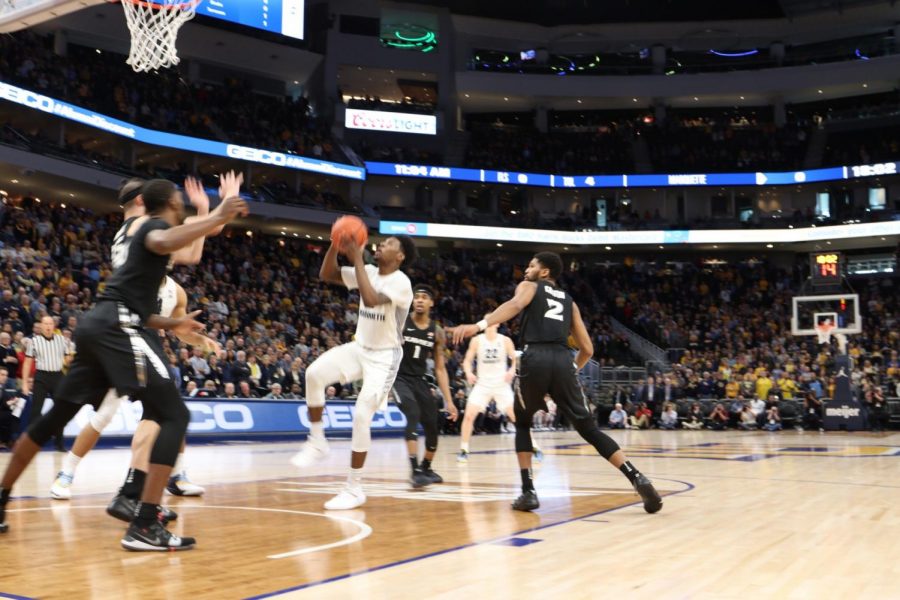 Marquette historically has not been known as a defense-oriented team in the BIG EAST since head coach Steve Wojciechowski took over in 2014. Marquette has also not been great against Xavier, going 2-7 in the last four seasons.

Both those trends changed Sunday as Marquette picked up its first BIG EAST win of 2019 in a 70-52 victory over Xavier at Fiserv Forum.

“Our guys came into the game with a real defensive mindset,” Wojciechowski said. “We competed very well on the defensive end of the floor.”

The Musketeers only hit one three, which came at the 6:52 mark in the second half.

“In today’s day and age of college basketball, it doesn’t happen very often,” Wojciechowski said. “I’d like to think it was all our defense, but they had some shots that they have normally made.”

Xavier sophomore Naji Marshall accounted for 21 of Xavier’s 52 points and shot 7-for-17 from the field. Fellow sophomore Paul Scruggs was the only other Musketeer to hit more than one field goal.

“Obviously there are going to be nights where the ball is not going to be going into the rim like we want it to,” redshirt junior Sacar Anim said. “You can’t really control that, but the one thing you can control is your defense.”

Marquette’s first 42 points came from three different players: Anim, junior Markus Howard and redshirt freshman Joey Hauser. No other player scored until the 14:50 mark in the second half, when junior Sam Hauser worked his way through the paint for a contested lay-in.

“Those three guys really led the offensive end of the floor,” Wojciechowski said. “I’m really proud of all three of those guys for stepping up on a night where offense wasn’t coming easy to us.”

Anim’s 20 points set a new season high for the Minneapolis native. He also had seven rebounds, two assists and one steal.

“He’s at his best when he’s driving and creating,” Wojciechowski said. “When he gets into the paint, he can find people. For us to be at our best, we need him to do that.”

After missing an open dunk Dec. 1 against Kansas State, Anim redeemed himself on a one-handed dunk in the second half.

“(My teammates) were probably like, ‘Finally, finally you dunk one,’” Anim said. “It’s not the norm for me.”

Howard had a team-high eight assists, which was also a season high for him.

“Markus really passed the ball well today,” Wojciechowski said. “He had eight assists. To be quite frank, it could’ve been 14.”

Howard held Xavier junior Quentin Goodin to one point on 0-for-3 shooting. Goodin averaged 13.5 points per game before Sunday.

“Markus has been a really good defender for us this year,” Wojciechowski said. “It’s called development. Guys get better.”

Xavier eventually found its offensive rhythm, hitting five of its last seven shots in the first half, but fell into the same offensive lull in the second half. The Musketeers were 9-for-30 after halftime.

Sam Hauser, who entered play averaging 14.3 points per game this season, had only two points on 1-for-8 shooting. He missed all six threes.

“Obviously Sam did not have a typical Sam day,” Wojciechowski said. “I don’t care who you are. Those things happen.”

“We had a lot of things to work on after that first game,” Joey Hauser said. “I thought we lost our competitive edge, and that’s really what we worked on all week.”

The Golden Eagles will seek their first road win of the season Wednesday at Creighton.

“Our conference is as competitive as ever,” Wojciechowski said. “Every game is going to be a fist fight.”

In the meantime, Wojciechowski can enjoy a defense-oriented win.

“To get a conference win is like gold, so I’m proud of my team especially on the defensive end,” Wojciechowski said. “Winning with defense is OK.”