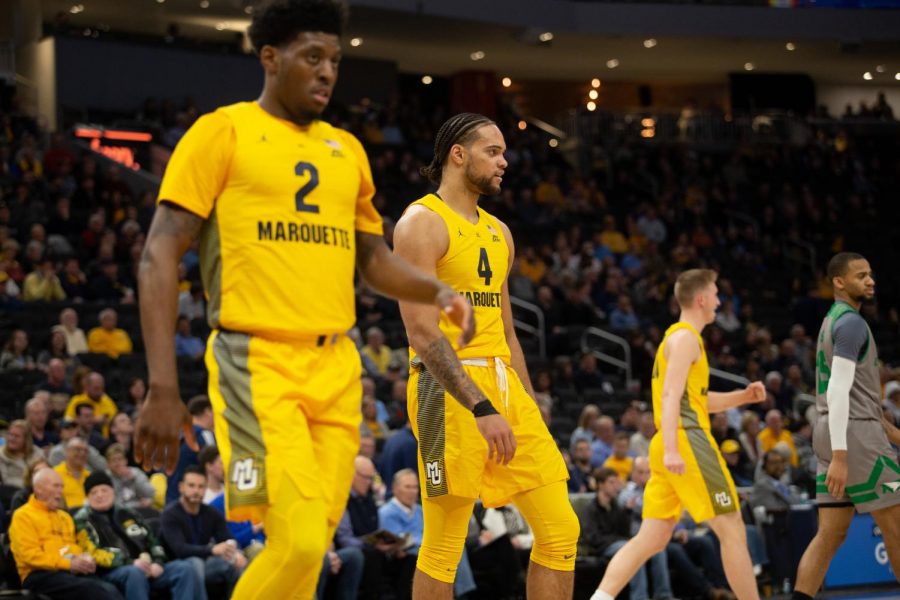 Marquette men’s basketball did not look like the No. 16 team in the nation Tuesday, falling 89-69 to unranked St. John’s in Queens, New York.

“We didn’t have the toughness you need to have on the road, especially against a high level team,” head coach Steve Wojciechowski said.

In a hostile environment, Marquette was out of sorts for most of the game and had the lead for just over two minutes.

Freshman forward Joey Hauser started the scoring for Marquette with an early three, but then St. John’s junior guard Shamorie Ponds took over. He helped the Red Storm go on a quick 10-0 run.

“(Ponds) has always been able to take over games scoring, which he did tonight,” Wojciechowski said. “He had 40 against us last year, and when he starts the jab and he starts to play with the ball, he’s going to shoot it, and we didn’t remember that from the scouting report.”

Marquette started to make some headway following a timeout, tying the game and keeping it within one possession for the middle part of the first half, even taking a 21-19 lead.

But Ponds started to heat up once again, knocking down two 3-pointers in the face of Marquette sophomore wing Jamal Cain. Ponds had a team-high 20 points on 7-for-9 shooting in the first half and helped give St. John’s a 39-31 lead at halftime.

Juniors Markus Howard and Sam Hauser, typically Marquette’s scoring catalysts, shot a combined 2-for-14 from the field and 1-for-6 from three in the half.

Joey Hauser had 11 points at the half and was almost solely responsible for keeping his squad in the game at the break.

The Red Storm’s high-tempo offense and tenacious defense helped St. John’s find several open looks from the perimeter in the first few minutes of the second half, including three treys from big man Marvin Clark II.

Clark, a fantastic shooter who typically plays at the center position for St. John’s, gave Marquette fits all day. He finished with 22 points, four 3-pointers and seven rebounds.

“The lineup they start (is similar to) Golden State. They called it the ‘death lineup’ when they put Draymond (Green) at the five,” Wojciechowski said. “You’ve got your best 3-point shooter who plays the five, but if you take him off the three, he’s going to take two steps and dunk it. We just didn’t have the answers for it.”

MU’s offense appeared to be in a better rhythm later on, with Howard, Sacar Anim and Joseph Chartouny slashing the basket and getting far easier buckets than the 3-pointers they had previously been hoisting up, but the Red Storm’s offense did not slow down, shooting 52 percent from the field after intermission. St. John’s at one point had a 21-point lead.

“We were never really able to get into a rhythm,” Wojociechowski said. “They did a great job on Markus (Howard) and we didn’t have enough possessions or quality executions to keep it close.”

“(St. John’s) did nothing out of the ordinary (on defense). I just wasn’t making shots. I didn’t play good and that was on me,” Howard said. “We just have to move on to the next game.”

“You’re looking at one of the top 20 teams in the country (in St. John’s),” Wojciechowski said.

Marquette will look to bounce back from the loss in its conference home opener against Xavier Sunday at 11 a.m.