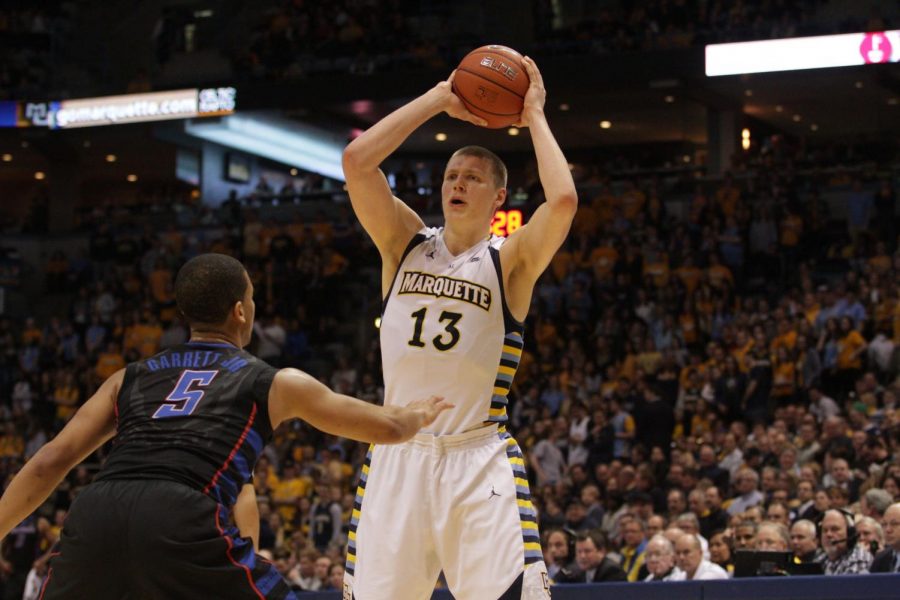 When Henry Ellenson announced he was leaving after his freshman year at Marquette to enter the 2016 NBA Draft, his vision hardly included minimal playing time in his third season.

“Obviously I want to be playing minutes up in Detroit and helping our team win,” Ellenson said as he prepared for the Detroit Pistons’ game earlier this month against the Milwaukee Bucks.

But Ellenson has grown accustomed to the new normal, playing in only two of the Pistons’ first 32 games this season.

“It wasn’t (what I was expecting), but it’s what my journey is,” Ellenson said. “Sometimes it’s not easy, but I have a lot of people in my corner that keep pushing me ahead.”

The 6-foot-11 power forward has had plenty of success in the NBA G-League, the NBA’s minor league system. In six games with the Grand Rapids Drive, Ellenson averaged 19.7 points and 11.2 rebounds in 33.6 minutes per game.

“For me the G-League is not a demotion,” Pistons head coach Dwane Casey said. “For me, the G-League is a great place to develop young players. I wish a lot of players could go there and play.”

Ellenson’s numbers have not transferred to the NBA yet. He scored seven and five points, respectively, in his two NBA games this season. Other times, like against the Bucks, he didn’t leave the bench.

The biggest issue for Ellenson is a lack of opportunity. Blake Griffin, 6-foot-10, and Stanley Johnson, 6-foot-7, are ahead of the Rice Lake, Wisconsin, native on Detroit’s depth chart.

“He’s just in an unfortunate situation where he’s playing behind Blake and Stanley Johnson at that same position,” Casey said.

Johnson and Griffin combine to average 58.1 minutes per game.

Injuries have also slowed down Ellenson’s third season in the pro ranks. When he was at Fiserv Forum, Ellenson had just finished recovering from a broken nose. Since then, he has also missed time due to an ankle injury.

But Ellenson must remain prepared at all times during the season, should Griffin or Johnson become injured. After going almost two months without a game in which he played 10-plus minutes last season, he played at least 13 minutes in the last eight games of the year.

“Just trying to stay ready,” Ellenson said. “That’s my main focus. I’ve just stayed in the gym, putting in a lot of work, getting in the weight room or staying on the court extra and getting my shots up.”

“He’s been a pro’s pro. He’s worked his butt off,” Casey said. “First one in the gym, last one to leave. I couldn’t ask for any more from Henry. I really see the future being bright for him.”

In the meantime, he has grown fond of playing for stretches in the G-League. It’s where he can play serious minutes.

“That’s always been where I feel real comfortable,” Ellenson said. “When I’m on the court, it’s when I feel best.”

“He should’ve been playing in the G-League his rookie year,” Casey said. “There’s no disrespect for that because he’s a talented young man.”

Time is ticking for Ellenson, whose contract expires at the end of this season. Casey said he’s confident Ellenson has a brighter future ahead of him in the NBA though.

“He’s got a bright future in front of him,” Casey said. “He’s an NBA player. He has NBA skills. He can shoot the ball.”

“He needs to watch a lot of film of Dirk Nowitzki,” Casey said. “He’s long, he can get his shot off against anyone. He just needs to continue to work on that craft.”

While his numbers are far below Nowitzki’s production in his early years, Ellenson is not giving up any time soon.

“I just have to keep fighting,” Ellenson said. “I have a lot of friends and family in my court and teammates who give me a lot of support.”

As he fights, he is keeping an eye on another team playing in Fiserv Forum too.

He attended the Marquette-North Dakota game and was prepared to make a bet with teammate Jon Leuer, a Wisconsin alum with the locker just right of his, before the Marquette-Wisconsin game the following Saturday.

“I’m rooting for those guys. They’ve got a lot of talent, especially with the Hausers and Markus Howard,” Ellenson said. “I was only here for a year, but I still have strong ties with my Marquette family.”