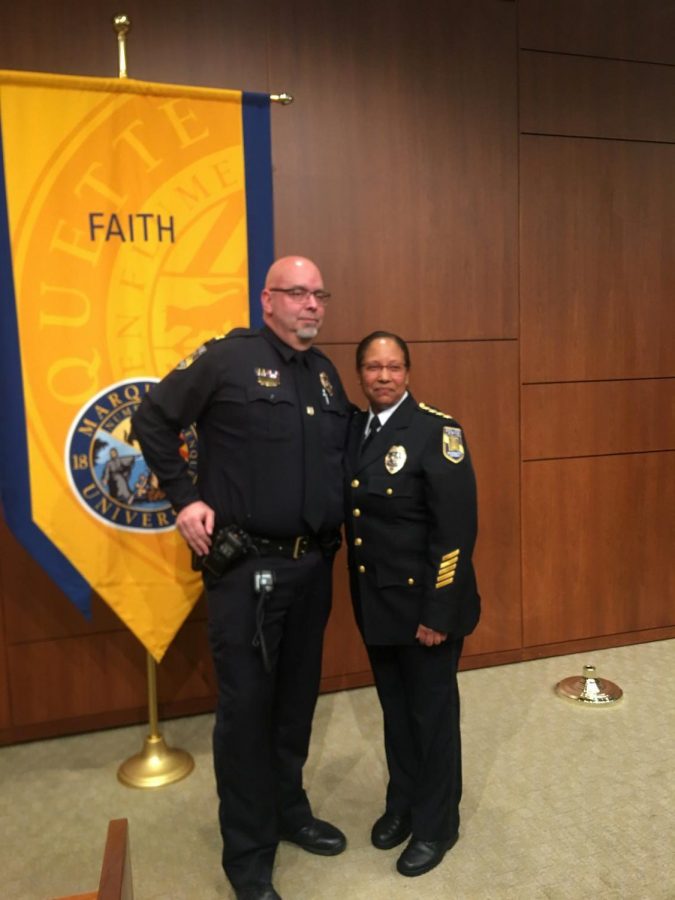 “All of us have an incredible responsibility working so closely with students in their formative years,” Hudson said. “I pledge to work each and every day to make sure MUPD leaves our corner of Milwaukee a little better than we found it.”

As to how her job at MUPD will differ from her time with MPD, Hudson said to ask her in six months. Hudson said she will fit in well with Marquette’s commitment to service and the community.

“During my interviews, (I could) feel how much the mission is part of (everything),” Hudson said.

Monday’s ceremony marked the end of Capt. Jeff Kranz’s time as interim chief following the resignation of former chief Paul Mascari. Kranz served as head of the department since Jan. 17, when Mascari was arrested for operating a vehicle while intoxicated.

The university formed a search committee for a new chief in June, which held  listening sessions throughout the summer and fall semesters for students and community members to share their concerns and hopes.

Marquette University President Lovell thanked Kranz for keeping the department running at a high standard during the search. Lovell said today’s swearing in was an important stride for the university.

“I first met (Hudson) a few weeks ago during the search process,” Lovell said. “It is our vision to be the most innovative Catholic university in the country … and Edith is innovative and entrepreneurial.”

“The presence of MUPD has a profound presence on the Near West Side,” Stanley said. “I am thrilled that Chief Hudson has been named chief of MUPD.”

Jazzmine Haygood, a junior in the College of Arts & Sciences who was on the search committee, said she believes Hudson is a person of tremendous integrity and that she genuinely cares about students and their concerns.