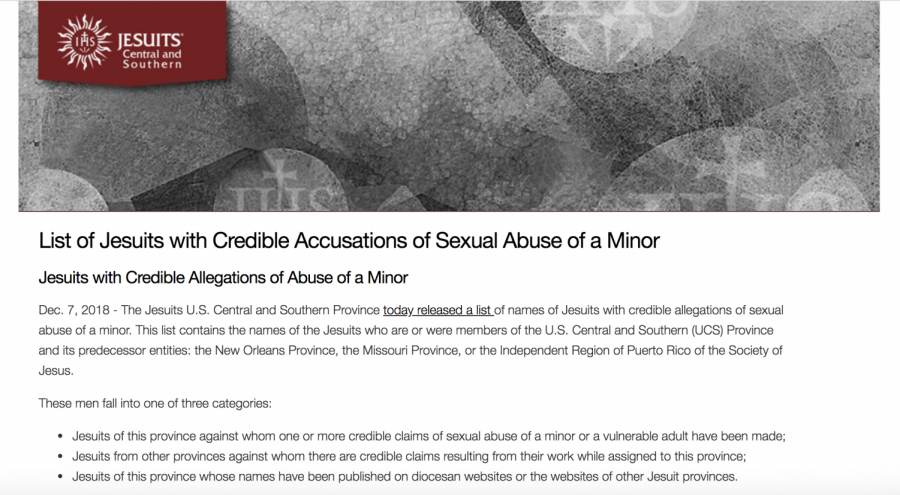 Two former Marquette Jesuits were listed among 153 members of the U.S. Central and Southern Province as having credible sexual abuse allegations against them, according to a list released Dec. 7 by the province.

Landwermeyer was at Marquette from 1973-1978. He served as Assistant Dean of Liberal Arts in that time. Fraser had a pastoral assignment at Marquette, meaning he served primarily as a priest. It is unclear what other roles Fraser served at Marquette, and for how long he served.

Fraser and Landwermeyer were not part of any court cases in the state of Wisconsin with allegations against them, according to Wisconsin Circuit Court records.

Provincial Ronald A. Mercier, who serves as the head of the Central and Southern Province, released a statement Dec. 7 in which he said allegations against the men listed did not necessarily stem from their listed assignments over the years.

University spokesperson Chris Stolarski said the university is aware of the allegations against the former Jesuits.

“The Midwest Province has confirmed that the allegation against Burton Fraser, S.J., does not stem from his assignment at Marquette,” Stolarski said in an email.

Stolarski said the university does not have adequate information about Landwermeyer’s allegations at this time and that questions should be directed to the Society of Jesus.

Therese Meyerhoff, director of communications for the Central and Southern Province, said she could not provide additional information about Fraser or Landwermeyer outside of information on the list.

She confirmed information from the list regarding Landwermeyer’s removal from ministry in 2010.

“(Landwermeyer) was removed from (public) ministry when a credible allegation was made against him, and he voluntarily left the Society of Jesus the following year,” Meyerhoff said in an email.

Landwermeyer’s removal from public ministry following allegations is standard procedure for Jesuits, according to information from the Central and Southern Province Jesuits website. Jesuits facing allegations are placed in Jesuit communities where they are under constant supervision and agree to a “safety plan” designed to reduce risks of reoffending.  The same page states the province immediately reports accusations verbally and in writing.

The Jesuits use a review board of at least five members to review investigations, with most of the board’s members coming from outside the Church. According to its own policies for protecting minors, the review board can have no more than two Jesuits. The remainder of the review board is populated with experts from the medical field, social sciences, legal and law enforcement field and state protective services.

The review board is not allowed to be employed by the Society of Jesus or any Jesuit-sponsored institution. However, members are appointed by the provincial in conjunction with the director of safe environment and professional conduct. According to its policies, the review board meets at least once a year, and more often if needed.

The website states the Jesuits’ protocols and procedures regarding sexual abuse allegations have been in place since 2002. The page said there were cases where the Jesuits were aware of accusations and allowed men to “continue in ministry or begin ministry elsewhere.”

“This was a failure on our part for which we are gravely sorry,” the website said. “We in the Church handle these situations very differently now than we did before 2002, when the Charter for the Protection of Children and Young People was instituted.”

The Charter for the Protection of Children and Young People is a document created by the Ad Hoc Committee for Sexual Abuse of the United States Conference for Catholic Bishops. The charter created standards and procedures for members of the clergy to address sexual abuse allegations.

“[Before 2002], it was often recommended that men who had abused minors could be safely returned to ministry after receiving treatment,” the website said. “Now we know better.”

Mercier said the Church’s first response must be directed toward survivors of the abuse.

“Words cannot (possibly) suffice to express our sorrow and shame for what occurred, our promise of prayers for healing and our commitment to work with them,” Mercier said in the statement.

Mercier said the decision to release the list was discussed over a three-month period. He said publishing the list was an effort to be transparent about abuse allegations.

The Society of Jesus said there are many reasons for not releasing the list sooner.

“Foremost was the desire to protect the privacy of victims, most of whom requested confidentiality,” the website said. “Secondly, while we deplore the actions of the offenders, they still have legal rights that we must protect.”

In his statement, Mercier said, “The storm that the Church experiences today calls forth from us an unprecedented and yet needed response. Silence in the face of the events of recent months cannot be an option.”

Stolarski said the university hopes the province’s list helps to heal victims who have “suffered in silence for decades.”

“Marquette University offers our prayers for continued strength and healing for all survivors of clergy abuse,” Stolarski said in an email.

The list may still see revision. The website said that while the Jesuits believe the list is complete, there may still be information in files they have not yet discovered. They are enlisting the help of former agents of the Federal Bureau of Investigation and former law enforcement personnel to provide an outside review of these files.

“No Jesuit with a credible accusation currently serves in public ministry,” the Central and Southern Province said in a press release. “Of the 42 names on the list, four men are still members of this province.”

The website said those four members “have in place specific restrictions appropriate to the accusation against them and are assigned to an appropriate residence where they receive supervision.”