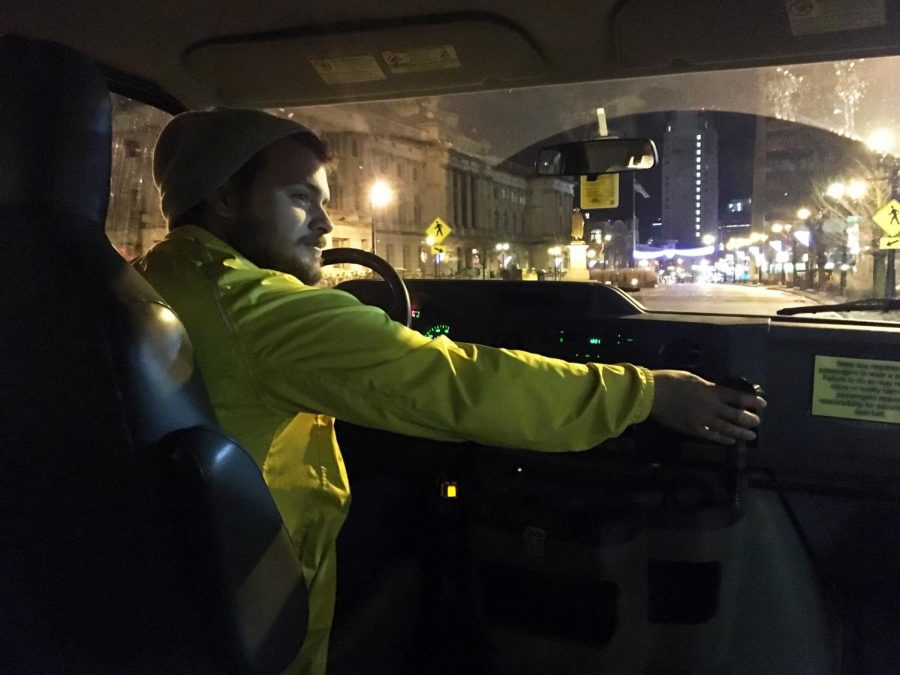 Sam Lenzini, a junior in the College of Arts & Sciences, opens the LIMO door for a student outside of Straz Tower Sunday night.

Late on a Friday night, calls pour into the one-person LIMO dispatch center after a basketball game ends. The student employee periodically relays pick-up locations to student drivers, attempting not to overwhelm them with the barrage of requests.

But there’s a roadblock: A student driver just hit 20 hours for the week. Under university policy, the driver is forced to clock out.

Without a replacement, student wait times lengthen and complaints increase.

“If you only have one driver on the road at a time when there could be more … it makes it stressful,” Alexis Garcia, LIMO nighttime assistant field supervisor and senior in the College of Education, said. “It makes our program slow down, (and) students get frustrated because they have to wait longer.”

The LIMO service, or Local Intercampus Mobile Operation, includes a fleet of 13 vans that shuttle students around campus, three of which are minivans for supervisors and medical transports. The decades-old program currently operates from 5 p.m. to 3 a.m. 365 days a year and extends until 4 a.m. on academic weekends, according to the program website.

“Marquette would not want to have two standards and treat non-U.S. students differently,” Stolarski said in an email.

Stolarski added that departments across campus have limited budgets for student employment. He said they must be able to maintain consistent staffing throughout the academic year.

Luke Bukouras, a student employment coordinator and senior in the College of Communication, said most of the program’s 12 nighttime supervisors hit their 20 hours or exceed them. At the end of each pay period, he said anywhere from five to 15 LIMO employees exceed their hours for the week.

He said the program’s office assistant is emailed a list of names, and the students receive regular base pay for their additional hours.

Kranz said student employees do not receive a penalty for exceeding 20 hours per week. He said he is notified of each occurrence and told not to let it recur.

Some LIMO employees are seeking changes in the university’s policy.

Brittany Cassel, a LIMO student employment coordinator and senior in the College of Health Sciences, said the program’s current system is not sustainable. She said LIMO supervisors are beginning to realize that.

“It’s not doable,” Cassel said. “We need help to be able to work the hours that we want to and to make sure that our program runs efficiently.”

LIMO employees said they first approached Kranz earlier in the semester with their concern about the 20-hour policy. Kranz said he reached out to university officials. He said the policy remains “firm,” and he is unable to control it.

Five LIMO employees then turned to Marquette University Student Government Nov. 12 at a Senate meeting, where some of them voiced concerns and subsequently met with Legislative Vice President Dan Brophy and Senator Jake Hanauer.

“This is the first time that LIMO employees in my three years have come into Senate and raised these concerns,” Brophy said. “We are more than willing to support students like them.”

MUSG President Meredith Gillespie said the students also brought up the idea of other full-time university employees or MUPD employees taking over for students once their 20 hours are up. Brophy related this to student desk receptionists, who turn over their positions to public safety officers during late-night hours.

“By having full-time people being able to step in and take over when they have their 20 hours, it allows for the entire student body to benefit from the LIMO service at its full capacity rather than having to pull one off,” Gillespie said.

Brophy said this option would keep students rested and vehicles on the road, allowing students to work more hours during the day.

The LIMO program receives between 60-100 calls per hour, Bukouras said. He said the LIMO program currently employs approximately 20 drivers. Kranz said LIMO schedules are based on whether employees are available to take on shifts.

“Obviously, there’s a lot of turnover with this kind of job,” Bukouras said. “Combined with … a limit on hours, I think that’s where our biggest lack of manpower is.”

Kranz said some LIMO employees are unable to balance late-night hours with academic schedules, contributing to the high turnover rate. He said the university’s 20-hour limit is built on the idea that academics should come before work.

Cassel said an option to cover LIMO shifts would be to monetarily incentivize student employees who are willing to work later hours.

“To be asking students to work until 3 a.m. on weekdays — that’s pretty big,” Cassel said. “Staffing people during that time is pretty difficult.”

While Bukouras said lifting the 20-hour constraint may not attract more people to the job, he said it would retain current employees.

“I’d like to be able to comfortably tell some of the younger people that if they do want to, they would be able to (work more hours) without me getting in trouble for saying something,” Bukouras said.

Adjusting the policy could allow students who are lab assistants or teaching assistants to take on LIMO roles as well, daytime student employment coordinator and senior in the College of Health Sciences Adria Shelley said. With 10-hour weekend shifts, the LIMO program can fill up a student’s 20-hour limit quickly.

“At the end of the day, our main problem is the work needs to be done by someone, and if people are willing to do it, they should be able to have that opportunity,” Shelley said. “People want to be able to make ends meet.”

Stolarski said Student Employment Services on campus is available to help students who must seek off-campus employment for full-time jobs.

“We absolutely understand that each student’s financial situation is unique,” Stolarski said in an email.

Garcia said if granted more hours, the LIMO program would not aim to schedule employees more than 20 hours. Instead, she said it would give students an option.

Non-academic periods of a week or longer, including Christmas break, spring break and summer break, are the only times student employees are allowed to regularly surpass 20 hours a week, Shelley said. Bukouras said students can work up to 37.25 hours, which he said rounds down to avoid full-time benefits supplied by the university.

LIMO employees are not seeking full-time benefits in their current request, Bukouras said.

Cassel said she hopes to see a resolution to the university’s 20-hour policy by next semester, but she said next academic year might be a more realistic goal.

“There’s so many different channels of people it needs to go through,” Cassel said.

Bukouras said the four white LIMO Express vans, which have more limited routes than the nine regular blue LIMO vans, are also understaffed. He said over the past three years, there has always been an open position. The vans are staffed by outside individuals hired by the university, Kranz said.

“Sometimes, there will be only one Express out when there should be two,” Bukouras said. “And I figure that we would be taking a little (more) stress off of the students that work here if we just had some adults working here at night.”

LIMO employees recently got a 10 percent base pay raise in October after a group of supervisors presented Kranz with a proposal near the end of August, Kranz said. He said pay for probationary and new employees remained the same, but all others received a bump. Kranz and LIMO employees did not provide specific wage amounts.

As interim chief, Kranz said he had some salary room in the budget to increase LIMO pay. He said the addition did not significantly affect another employee’s existing salary in the department, but he did not provide specifics.

While LIMO employees said they are grateful for the raise, Bukouras said they are hoping to see another pay increase factored into the next fiscal year’s budget.

Kranz said budget work typically occurs in May, but he said a pay raise would be under the new chief’s discretion. The new chief has not been hired yet.

Garcia said she hopes to see students become more educated about the LIMO program, resulting in more respect from the Marquette community.

“(The university loves) to tell parents that we have this awesome program, but I feel like sometimes we don’t get the same respect from the university,” Garcia said. “I would say (I want) greater respect … not just to advertise us as a program, but to put their money where their mouth is.”