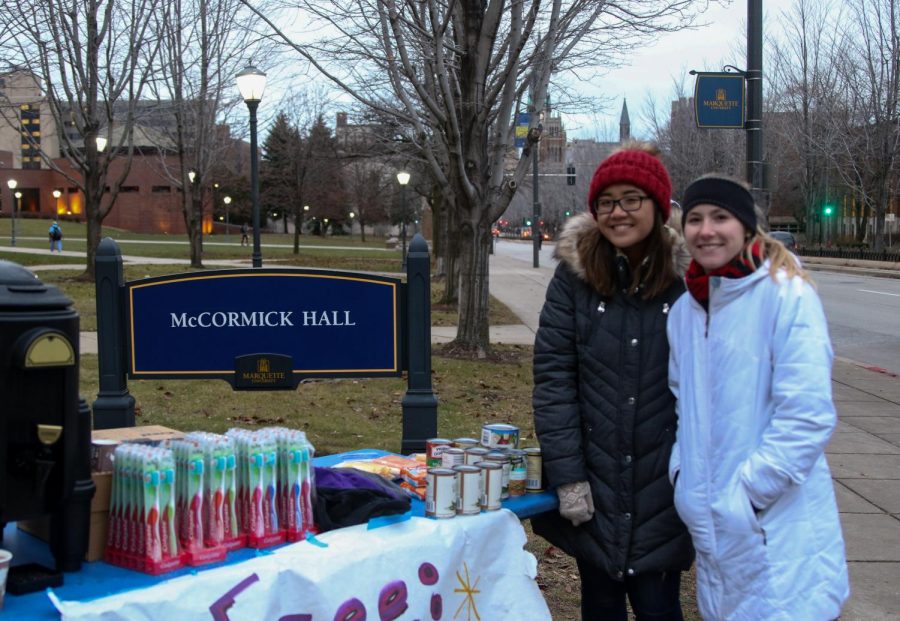 Igniting Hope celebrates the Christmas season with the Milwaukee community.

The Residence Hall Association celebrated Christmas at its annual Igniting Hope event Monday, which is a three-part holiday celebration.

“(Igniting Hope) is the beginning of the spirit of Christmas and the holiday season for all,” Taylor Gladieux, residence hall director of Cobeen, said. “That means giving back to one another, making sure we are all united and celebrating together.”

The event used to be a tree lighting ceremony. This year’s Igniting Hope was comprised of community outreach, a tree blessing and a reception, said Sophie Cieslicki, RHA vice president of administration and a senior in the College of Arts & Sciences.

Students lined the 12th and 16th street bus stops on Wisconsin Avenue, handing out donations and hot chocolate to members of the Milwaukee community.

Hannah Mauch, a junior in the College of Education, said she almost ran out of hot chocolate outside the 16th Street bus stop. As a first-year member of RHA, she said she was excited to finally give back to the community and make Milwaukee residents feel special during this season.

“Marquette does a lot for the community throughout the entire year, but I think it’s really important to do so during the holiday season when some people might be feeling lonely or left out, and don’t have family or loved ones to be around,” Mauch said. “We have this as an offering towards them to keep their spirits up and to know that they are loved by the community around them.”

Jake Smith, RHA national communications coordinator and a sophomore in the College of Engineering, said Igniting Hope will go on to be presented at the National Association of College and University Residence Halls Conference held at Louisiana State University in May.

After three years of presenting Igniting Hope at GLACURH, Igniting Hope won because this was the first year member presented the program with the community outreach aspect, Smith said.

“It felt really good (to finally win),” Smith said. “Everyone was so happy that (the program) finally made it. All the preparation and work that we put in paid off because the changes we made (to the program) added so much more to it.”

During its program-of-the-year event, RHA reached out to local organizations and businesses for donations to hand out at the bus stops.

The RHA chose to hand out donations and hot chocolate at bus stops to reach the maximum amount of people in a limited amount of time, Cieslicki said.

“We wanted to reach out to the community while not straying too far off campus, and a lot of traffic goes through those bus stops in an hour,” she said.

They collected items like toothbrushes and toothpaste from the School of Dentistry, clothes and socks from the spirit shop and coupons from local businesses such as Stone Creek Coffee and Ian’s Pizza, Cieslicki said.

Igniting Hope also ties into the Jesuit values of being men and women for and with others, Gladieux said.

“It’s always about how we can make sure that we are giving back to the community that we’re in,” she said.

Catholic values were also celebrated at the tree lighting and blessing ceremony outside of the Alumni Memorial Union, where Gary Klump, Carpenter’s hall minister, came to bless the tree and talk about Christmas spirit and the beginning of Advent.

The reception in the Alumni Memorial Union followed the tree lighting ceremony and featured performances by the Gold ‘n Blues and the Naturals, hot chocolate and desserts and card and tie blanket-making for kids at the Children’s Hospital of Wisconsin.

“Hopefully (students) will take this spirit with them when celebrating with their families and friends on their own and in their apartments, residence halls or wherever they’re living to show that they’re a Marquette student,” Gladieux said.

Jenin Teleron, a freshman in the College of Nursing, said Igniting Hope encouraged her to embrace Marquette’s values.

Even though the event is over, Igniting Hope is continuing this week at the residence hall tree decorating contest, Cieslicki said.

She said that each residence hall has a specific theme for their tree and Thursday, judges will evaluate each tree. The winners will receive a night of hot chocolate and cookies provided by AMU catering.