Board of Trustees approves tuition increase 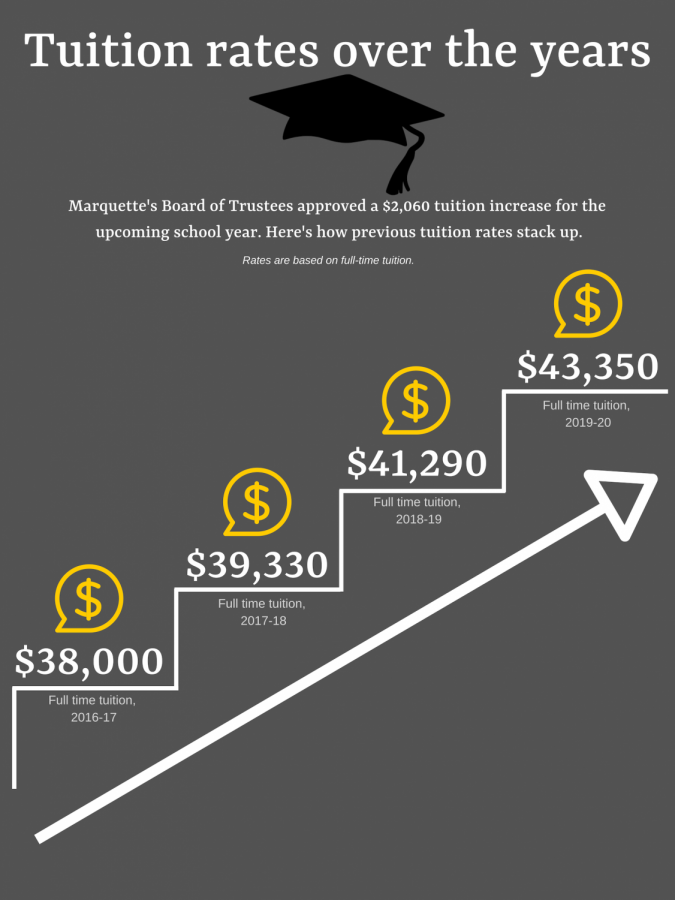 This is the largest increase in tuition that students have seen in recent years, according to archived university news briefs. Tuition has risen steadily at private nonprofit universities for decades, according to the National Center for Education Statistics.

“Tuition rates are set to ensure the university can provide the best educational, co-curricular and operational experiences for our students, as well as our faculty and staff who make up this great community,” university spokesperson Chris Stolarski, said in an email.

“Honestly, it’s bogus,” Keenan Gaffney, a sophomore in the College of Business, said. “(It’s) almost impossible to afford if I didn’t have scholarships.”

“We will continue to dedicate significant resources to scholarship and financial aid for our families,” Stolarski said in an email. “Making higher education accessible to families from all backgrounds is part of the very foundation of Marquette.”

Stolarski said the university does not increase tuition to fund or offset the costs of any one expense.

“We understand that a college education is a significant financial investment for our students and that many families make sacrifices to send their sons and daughters here,” Stolarski said. “It’s equally important to point out that continuing to offer the competitive and transformative education that families have come to expect from Marquette sometimes requires increased resources.”

Lucila Radke, a freshman in the College of Arts & Sciences, said the university needs to be more careful with raising tuition.

“I get that it costs money to run a school, but raising tuition isn’t the only way to get money,” Radke said.

“The 2019-’20 tuition increase percentage is the same as last year,” Stolarski said, adding that rates are set taking into account a university’s entire financial picture, as well as macroeconomic and demographic trends.

“I have friends (at other schools) that agree to pay a certain tuition when they are freshmen, and it freezes,” Keeley Hayden, a junior in the College of Arts & Sciences, said. “Obviously it’s different because we go to a private school, but it’s frustrating when it was $38,000 and now it’s $41,000, going to be $43,000.”

Stolarski said there are representatives from the Bursar’s Office, the Office of Financial Aid, the Registrar and the Office of Undergraduate Admissions to help students and families with their financial aid plans during their time at Marquette.

He said the deadline for families who currently receive federal financial aid through FAFSA is January 15, 2019.