$525K grant for green enzyme research given to professors 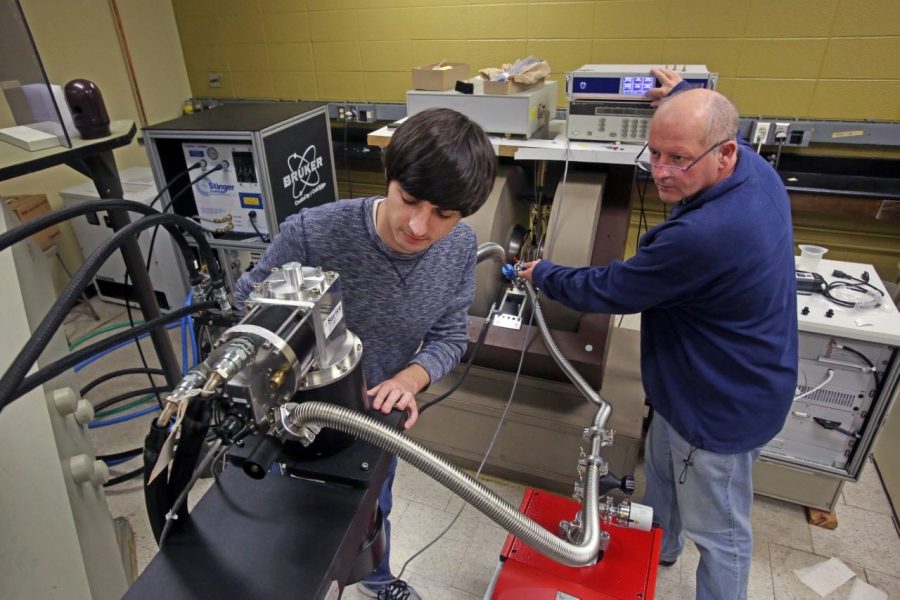 Richard Holz, chemistry professor and dean of the College of Arts & Sciences, and Brian Bennett, professor and physics chairman, received a $525,000 grant from the National Science Foundation for research into a “green” catalyst.

“A ‘green’ catalyst is one that is environmentally friendly,” Holz said.

The catalyst they are researching is an enzyme called nitrile hydratase, which speeds up the process of converting nitrile molecules, which are found in plants, into molecules called amides, according to a news brief.

“Nitriles and amides are important chemicals in many industries, particularly the pharmaceutical industry,” Bennett said. “In addition, stereospecific conversion of nitriles to amides is an important step in making many other drugs and proposed drugs (such as) common amide-containing drugs includ(ing) paracetamol, penicillin and LSD.”

Bennett added that nitriles can be found in latex-free gloves, rubberware and superglue.

“Nitriles (cyanides) have also been used in many industrial and agricultural settings and have polluted the land,” Bennett said. “Clean-up by enzymatic conversion to amides is the most environmentally friendly way to reclaim those sites.”

Bennett said the benefits of using “green” catalysts can be seen in our everyday lives, which would result in cleaner air, cleaner water and less polluted farmland. He added this would lead to better food and lower carbon emissions, which would subside climate change.

“You and your offspring may be less likely to get cancer or asthma from environmental pollution, or be affected by hurricanes and tornadoes unleashed by climate change,” Bennett said. “And (you would) have access to better, cheaper and safer drugs with new activities thanks to the specificity of these catalysts and the green production methods.”

Bennett said that researching this green catalyst is also important for Marquette and Milwaukee for multiple reasons.

“Non-green chemical catalysts dominate the chemical industry … (and) are costly, non-specific, often require high energy input to operate (and) are extremely expensive to dispose of responsibly when spent,” Bennett said.

Bennett added that non-green chemical catalysts include heavy metals such as copper and nickel, acids, organic chemicals and non-biodegradable heterogenous catalysts such as silicon dioxide and calcium carbonate.

“(This research) addresses the missions of excellence in research and benefits to our community, the Ignation idea of going out and setting the world on fire through cutting-edge, out-of-the-box approaches … and it brings in funding to support research education for both graduate and undergraduate students,” Bennett said.

Holz said he decided to get involved in this research because not much was known about how the nitrile hydratase process converts nitriles into amides.

“As this conversion is very important from an industrial, environmental and pharmaceutical standpoint, we felt it was worthwhile to figure out the catalytic process,” Holz said.

Holz said his research group has been doing research on the “green” catalyst for about 15 years.

“EPR involves big magnets, microwaves and exceedingly low temperatures, and provides wiggly lines that can be interpreted through a computer program in structural terms,” Bennett added. “It tells us how our catalyst structurally interacts with its target molecule (substrate).”

Bennett said he mainly directs the EPR program, but the research group often gets together to discuss “papers-in-progress” as well as strategies for future work.

Holz said Bennett and himself applied for the NSF grant, adding that they went through a rigorous review process, resulting in about ten to 15 percent of grants receiving funding.

“NSF grants are provided to the most promising research that is both innovative and forward looking,” Holz said. “While other NSF grants fund research on environmentally friendly catalysts, our proposed research was deemed worthy of funding after significant peer review and discussion by a panel of experts.”

Bennett added this is the third funding cycle Holz and himself have received for research on the green catalysts.

According to the National Science Foundation’s website, the grant was given by Chemistry of Life Processes in the Chemistry Division and is estimated to last until July 2021.