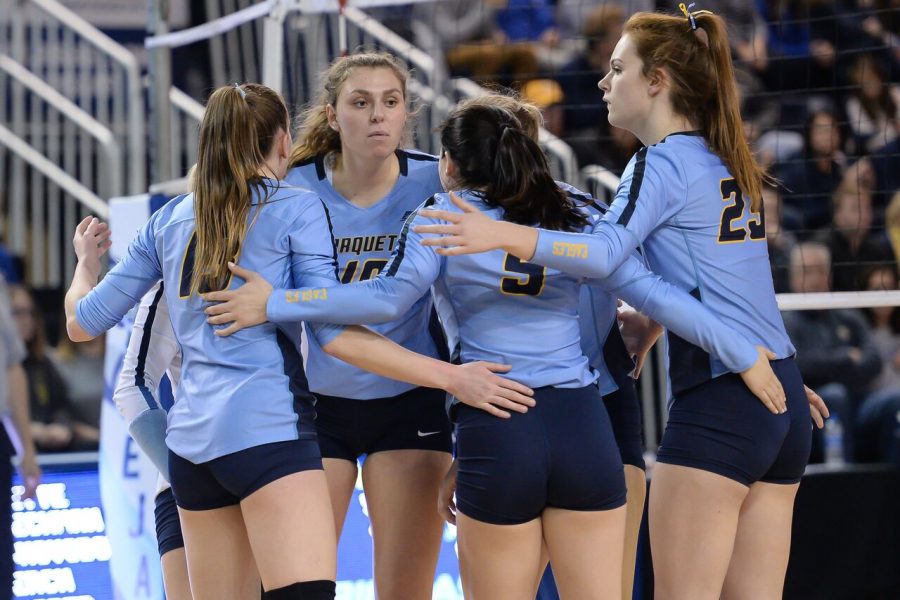 The first set had 22 ties and 13 lead changes, and neither team led by more than two points. The Golden Eagles narrowly won the set 28-26. Sophomore Hope Werch had a team-high seven kills and had a .462 hitting percentage. Marquette hit .314 as a team while holding Creighton to .222.

The Bluejays completely dominated the second set. They grabbed a 19-9 lead and never relinquished it. Consecutive Sarah Rose service aces helped Marquette go on a 7-0 run and cut the deficit to three points, but Creighton senior Taryn Kloth’s kill helped the Bluejays win the set 25-22.

The Golden Eagles took an early 9-4 lead in the third set, but a 11-2 Creighton run gave the Bluejays the advantage. Marquette head coach Ryan Theis called a timeout, but Creighton finished off the set despite six ties and three lead changes.

At the verge of a losing another BIG EAST Championship to Creighton, Marquette hopped out to a 3-0 lead in the final set. The Bluejays went on a 4-0 scoring run to extend their lead to 8-4. Following a Theis challenge and call reversal, the Golden Eagles cut the deficit down to two, but Creighton won the set 25-21 to clinch another conference title.

Since the No. 16 Golden Eagles (26-6, 15-3 BIG EAST) lost, it is now up to the NCAA selection committee whether or not Marquette will host the first and second rounds of the NCAA Tournament Nov. 29-Dec. 1.

It was the third matchup between Marquette and Creighton this season. Creighton swept Marquette in Omaha, Nebraska, and won in four sets in Milwaukee.