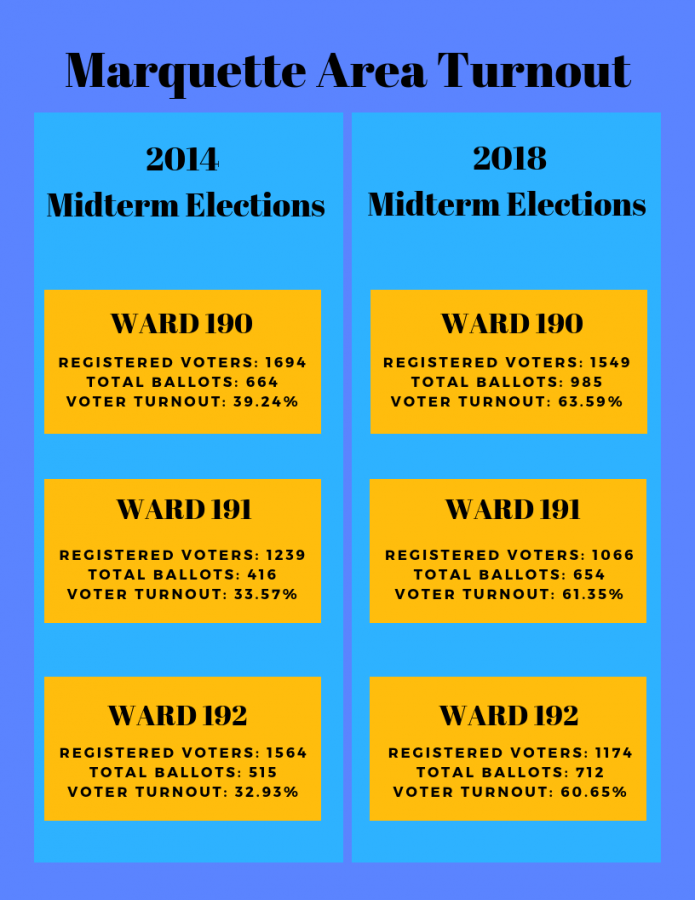 The results of the Nov. 6 election overwhelmingly leaned toward Democratic candidates in wards 190 and 191, where students who live in Marquette residence halls and apartments near and far from campus voted, according to Wisconsin Elections Commission unofficial results.

The Alumni Memorial Union serves as a polling site for wards 190 and 191.

Philip Rocco, an assistant political science professor, said there are not usually more than three or four wards per polling place.

“Wards are not themselves a unit of representation, but an administrative unit to organize where voters cast ballots,” he said in an email.

Wards 192, 194 and 196 are the other wards students voted in, which include off-campus housing, like Streck II, Kensington, and Renee Row apartments to name a few.

All six wards include a mix of MU and non-MU students. Wards 190 and 191 and 192 include more on-campus addresses than the other wards.

Evers beat incumbent Gov. Scott Walker by 1.2 percent for Wisconsin governor, securing about 30,000 votes more than Walker, according to the Associated Press.

Czech-Mrochinski said voter turnout was high across the state of Wisconsin. According to the Wisconsin Elections Commission unofficial results, vote turnout in Milwaukee County alone was 79.26 percent.

Rocco said he agreed with Czech-Mrochinski.

“Even restricting our attention just to campus wards, the turnout increase from the last midterm (2014) is quite substantial,” Rocco said.

Czech-Mrochinski said the election officials at the AMU were City of Milwaukee Election Commission employees.

Since Wisconsin allows same-day registration, Czech-Mrochinski said the university coordinates students, faculty and staff to assist the AMU polling site so students have the correct documentation in order to vote.

The university provided door hangers in residence halls and university-owned apartments informing students which ward to vote in and what documentation was needed to vote prior to election day, Czech-Mrochiniski said.