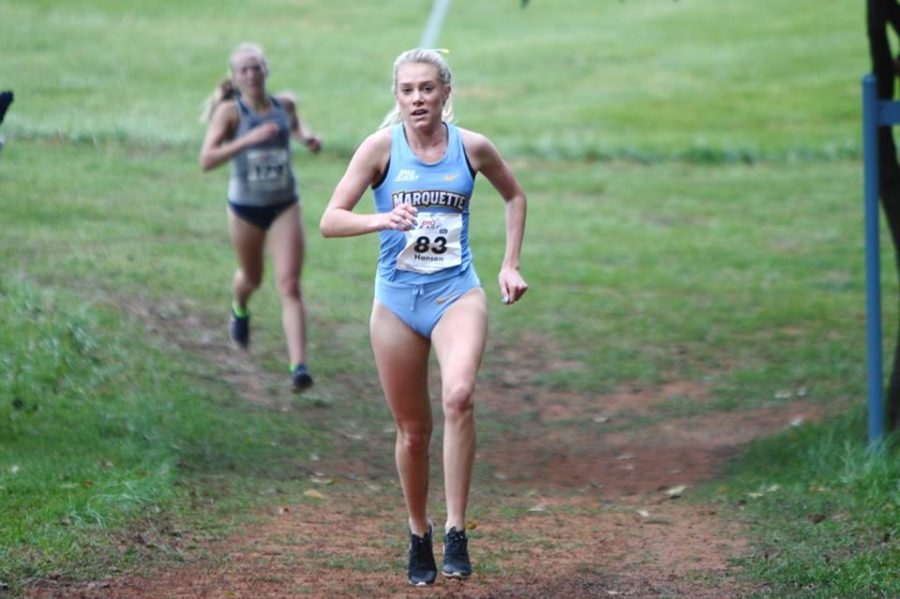 After Mary Hanson transferred to Marquette her sophomore year, she got to a point where she thought she wasn’t going to be a good cross country runner. Her first year did not go the way she wanted it to, leading to doubts about her abilities.

Head coach Mike Nelson’s patience helped her through the process.

“He was really patient with me,” Hanson said. “I’ve felt constantly supported by him, and I’ll always be really thankful for that.”

Hanson said her high point of this season was at the Bradley Pink Classic, where she placed 23rd overall in a field of nearly 300 runners.

“The conditions were rough. The course was muddy,” Hanson said. “The race ended up being just as thrilling as it was tough. It’s always a pleasant surprise to overcome adversity and walk away with a (personal record).”

Her improved results came with an uptick in confidence.

“Not only have her times improved, but her confidence and passion have grown as well,” junior Caitlin McGauley said. “She knows she can be up with the top pack, sets her mind to it and executes.”

Along with emerging as the top runner in the program, she is a leader and mentor to her teammates off the course.

“She led the team by example this year,” McGauley said. “She’s very hardworking, and her energy spread to everyone on the team.”

McGauley said Hanson is a vocal leader and provided motivation to the team in huddles before races. Hanson said her teammates know what they’re capable of, and she told them to just go out and do it.

Hanson has been a leader for underclassmen runners as well.

“She really took me under her wing,” freshman Kendall Pfrimmer said. “She always makes herself available to talk about absolutely anything.”

Pfrimmer said having a senior and top-level runner willing to give her advice and show her the ropes was extremely helpful. Nelson said he also noticed she is always encouraging while showing what it takes to be “a true elite Division I runner.”

However, Hanson hasn’t always been this way.

She said an essential lesson Nelson taught her was that half of the game is simply “showing up.” Hanson said “showing up” means competing with courage and intention, regardless of anything else going on or holding her back.

Along with her personal doubts her sophomore year, she faced another setback her junior year when she suffered a stress fracture last spring. Her teammate, senior Nora Keller, suffered a similar injury at that same time, which brought the two closer together in their time off the course.

“It was her support and work ethic that kept me motivated to keep training despite not being able to run,” Keller said. “She hasn’t let these setbacks hold her back.”

Even this season, during the week before the conference championships, Hanson said she was not medically cleared to run, and even after she was cleared, she did not feel nearly as physically or mentally prepared as she normally would have.

“Some races didn’t go the way she wanted them to,” Pfrimmer said. “But she always stayed positive and celebrated others’ success that day.”

Hanson’s teammates said they are extremely grateful to have had her on the team.

“She’s been a motivator, an inspiration and a shoulder to lean on for me,” McGauley said. “I’m thankful for her every day.”

“I will forever remember Mary’s unmatched sense of humor and genuine kindness toward everyone,” Keller said. “I can say with sincere honesty that my experience here at Marquette was improved by her presence.”

With the cross country season and Hanson’s career coming to a close, the focus shifts to track and field, where she will be able to compete for one last season. But for now, she can reflect on her time in cross country here at Marquette and appreciate the time she had.

“I love this sport and I am thrilled to have been a part of such an amazing community,” Hanson said. “I can’t fit my gratitude for this program into words.”