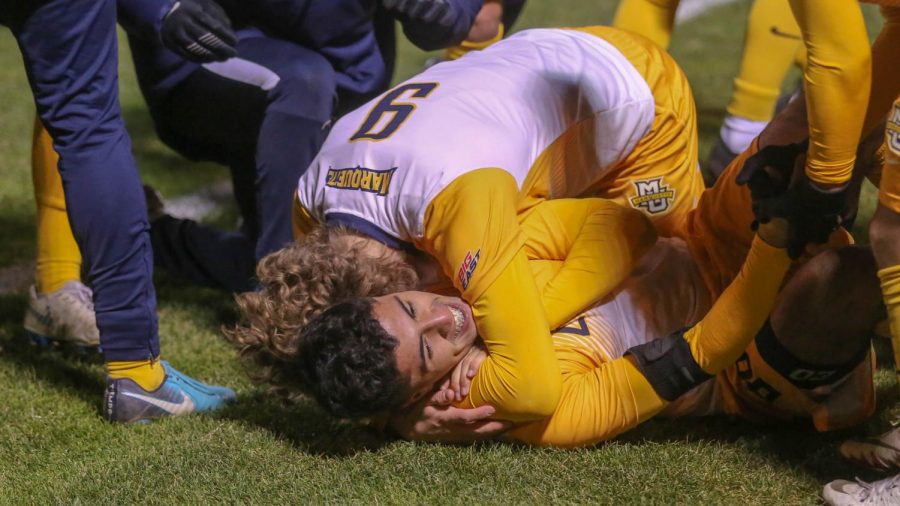 Marquette men’s soccer defeated Xavier with a 7-6 advantage in penalty kicks following a 2-2 game. The win advances the Golden Eagles to the BIG EAST Championships semifinals for the first time since 2013.

“It’s hard to put into words. … It’s unbelievable,” captain Luka Prpa said. “You could see with our celebrations at the end what (the win) meant to us.”

Walk-on Leo Villa hit the winning penalty kick in the ninth round of the shootout after Xavier freshman Bryce Curran missed against Marquette goalkeeper Luis Barraza.

“(The shootout) is probably my least favorite thing in all of (soccer), and I love soccer,” head coach Louis Bennett said. “Our guys were resilient, and I thought they did a fantastic job.”

The Golden Eagles and the Musketeers played a tightly contested matchup through the first 110 minutes, as both squads finished with 14 shots apiece.

Xavier forward Derrick Otim scored the game’s first goal in the 12th minute after Marquette turned it over in its defensive zone.

Luka Prpa tallied the first goal for the Golden Eagles to tie the game in the 64th minute. It was his fifth of the season.

“Pat (Seagrist) put it right on my foot, I was able to control it,” Prpa said. “I just picked my spot and put it in.”

Prpa has now scored five goals in the team’s last three home matchups against the Musketeers.

“He grinded it out,” head coach Louis Bennett said. “He handled himself like a top-level player getting top-level attention from the other team.”

Shortly after, senior forward Diego Nunez scored his second goal of the season in the 72nd minute, which gave the Golden Eagles a 2-1 lead.

However, Xavier did not go down quietly, as Musketeer forward Sergi Samson tied the game at 2-2 in the 83rd minute. Marquette then pulled away in penalty kicks on Villa’s heroics.

“In the beginning of the season, I don’t think anyone expected this result from us,” Prpa said. “Everybody on our team believes, and we know if we all stick together, we can get the job done.”

“He’s done absolutely fantastic,” Bennett said. “It’s crazy how much energy and heart he’s got. (It seems like) he’s got this huge heart cavity and it gets bigger every time he does something positive.”

The Golden Eagles will take on the top-seeded Creighton Bluejays in Omaha, Nebraska, on Wednesday night at 7 p.m.

“The way that they play, we’re going to have to weather some storms. Soccer is a crazy game, and anyone can win,” Bennett said. “I said in the locker room (to the players) that the reward for good work is more work.”