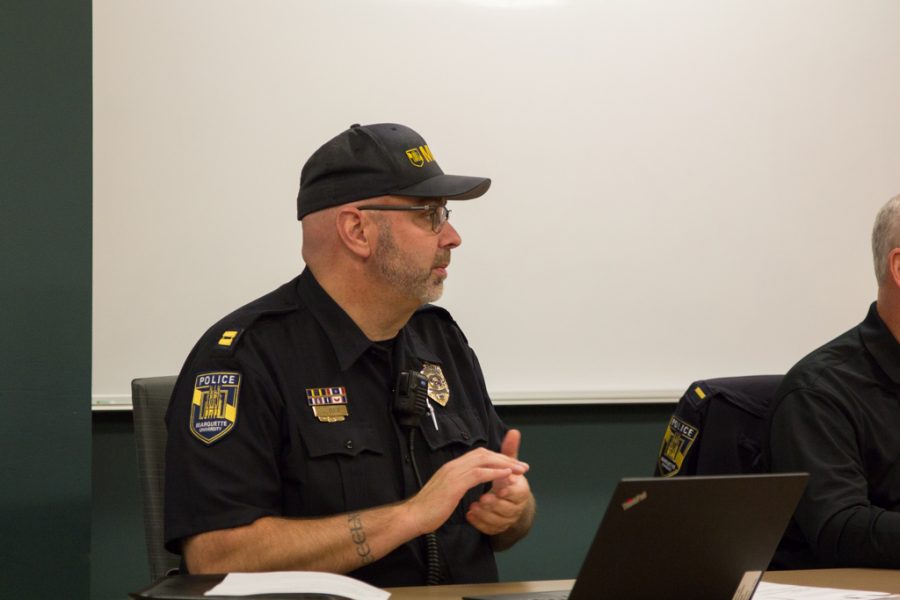 Capt. Jeff Kranz spoke at the MUPD Advisory Board meeting.

At the beginning of the year, the search committee to find a new Marquette University Police Department chief said the new chief would be announced in October. At the first MUPD Advisory Board Meeting Oct. 25, no announcement was made.

The search committee planned to hold a private meeting again on Nov. 5, but did not occur because the committee scheduled interviews with the three finalists last week. The interviews happened on Tuesday, Oct. 30, Wednesday, Oct. 31 and Friday, Nov.1. No additional comments were made about the finalists’ interviews.

The search committee will meet again Nov. 5 to analyze input it received during the interview process and develop its hiring recommendations for submission to university leadership, associate professor of law and chair of MUPD advisory board Thomas Hammer said.

“Our goal from the start has been to extend an offer during the first semester of the academic year,”  Rana Altenburg vice president of public affairs and co-chair of the search committee said.

“The search committee interviewed eight semi-finalists and invited three finalists to make campus visits to meet additional members of the campus and Milwaukee communities,” Altenburg said. “Additionally, a representative group of 43 students were invited to participate in the finalist visits by having lunch with each finalist.”

These students were drawn from a wide range of backgrounds and leadership positions, Altenburg said.

For now, MUPD Capt. Jeff Kranz will remain in the role of interim chief following the unexpected leave of former chief Paul Mascari, who spent 14 years with Marquette. He resigned from his position May 25 after being arrested for operating while intoxicated Jan. 17.

Kranz said in an August interview that he is very proud of his staff for the way they have continued to go about business since Mascari’s leave.

“Everyone has really stepped up throughout the entire department and shared the additional workload,” Kranz said.

In a press conference Aug. 22, University President Michael Lovell said the university is taking its time to make sure it chooses the best candidate.

“It is very important to us to understand what the needs were and base the description off those needs,” Lovell said.