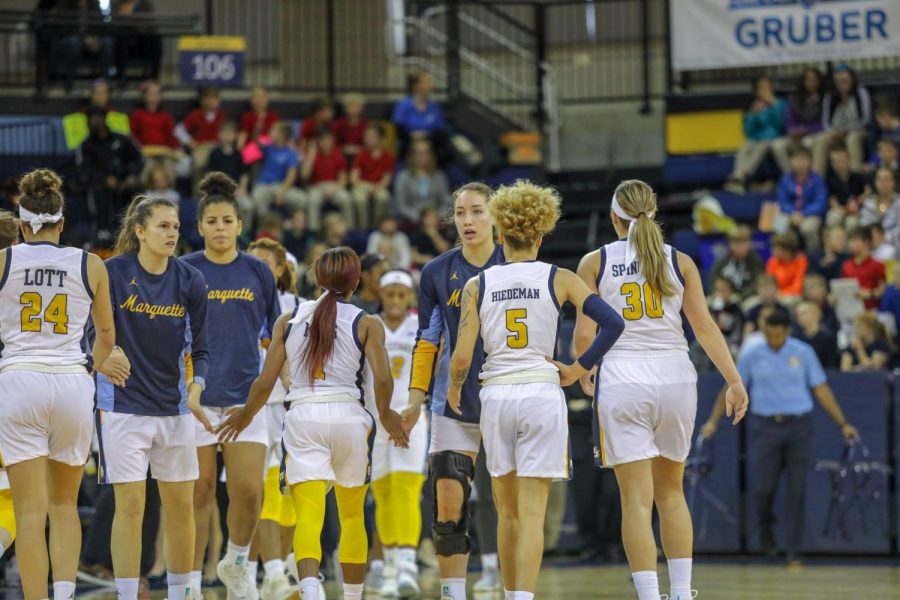 After a tough loss in the second round of the NCAA Tournament last season, Marquette women’s basketball is looking for ways to go to its first Sweet 16 in program history.

“We have very high expectations, and none are higher than the ones we hold for ourselves,” head coach Carolyn Kieger said. “We’re taking it one play, one possession and one practice at a time.”

That process includes looking to enhance the team’s mental and physical stamina.

“It’s how we approach our mistakes,” Kieger said. “In basketball, there are over 100 possessions in a game, and it’s about handling failure. We’re just doing different stuff this year to keep our team focused on the next play and not dwelling on the past. It’s all about the now.”

During the offseason, Kieger tasked players with reading chapters of a book called “The Mental Game of Basketball” by Brian Cain.

“(The book) talked a lot about playing 200 feet at a time and not worrying about the outcome,” senior forward Erika Davenport said. “We just want to go out there and play, have fun and compete every night.”

Senior guard Allazia Blockton said it will change the team’s approach to the ups and downs of the season.

Blockton talked about how the book tells the reader what is right and wrong regarding the mental side of the game, which Blockton said is 75 percent of basketball.

“(The book) was a good thing for our team because sometimes we do struggle on the mental end when we go through a slump,” Blockton said. “Now, I think we’ll be able to get out of that slump quicker.”

The team had several meetings to reflect on the chapters in the book, which Kieger said will be beneficial to the players’ mental games.

“It really helped us think about how to be mentally focused … (and) how you have to mentally prepare before games,” Davenport said. “We talked a lot about self-talk and saying to ourselves, ‘We got this. We trained for this.’ I think it’s really going to help us in those tough moments.”

Thursday night’s 77-75 exhibition loss against Division II team Grand Valley State was an early test for the Golden Eagles both mentally and physically. How they rebound from their unexpected loss could be an indication of how the rest of this season will play out for Marquette.

“Before we even step on the court, whether it’s 15 minutes or a half hour, every day we are talking about how we can be better mentally,” Kieger said. “It’s going to become a part of our daily routine.”

As Marquette makes those mental adjustments, the team also has the help of one of its most talented rosters ever. In the last two seasons, the program has made back-to-back appearances in the NCAA Tournament, the first time it has achieved that feat since its four consecutive appearances from 1997-2000.

“You will see a deeper team than you’ve ever seen from us before, which is going to allow us to do a lot of different things,” Kieger said. “Our team has a new sense of hunger. Culturally, I think that our team is at a really great place right now. We’re in a very positive state, and our chemistry is better than it has ever been.”