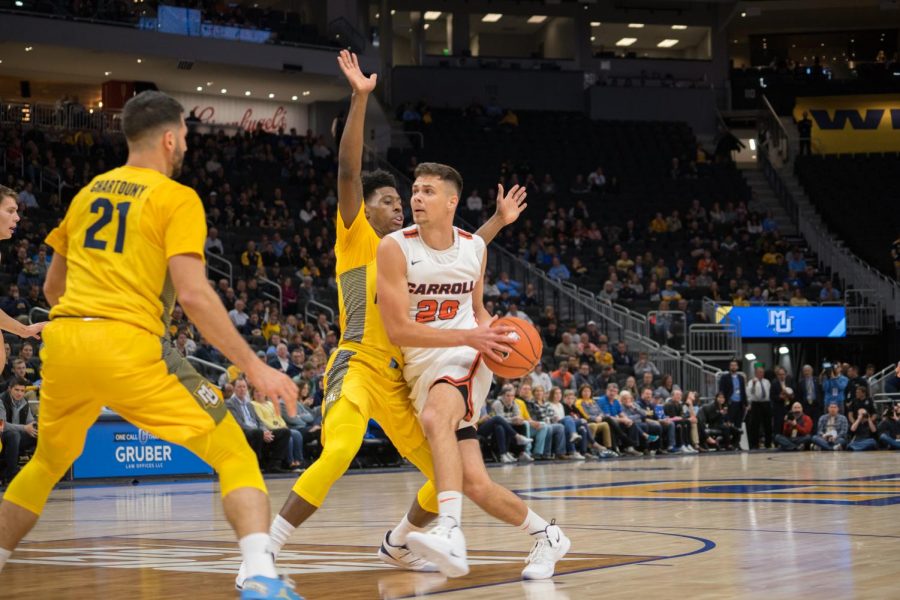 Head coach Steve Wojciechowski has emphasized defense through the first month of practice.

And the team responded to Wojciechowski’s defensive training, forcing 24 turnovers in the team’s 87-44 exhibition win over Carroll University Tuesday night at Fiserv Forum.

“We’re having more fun playing defense,” Morrow said. “As we continue to get the concepts down, we could commit to what coach’s plans are more.”

The Golden Eagles did not waste any time defensively, forcing 18 first-half turnovers. Carroll had three assists before intermission.

Morrow and Wojciechowski both said the defense still needs to improve.

“We had an OK defensive night, but we need to be better,” Morrow said.

The win came despite a relatively slow start offensively, as the team scored two points in the first three minutes. Marquette did not have the lead until the 13:44 mark.

“The first 10 minutes … felt like an hour and a half,” Wojciechowski said. “There was no rhythm or flow to the game.”

Then a 9-0 run about midway through the first half gave Marquette the lead, and the Golden Eagles did not relinquish the lead for the rest of the night. Wojciechowski praised the bench’s first-half contributions.

“To be quite frank with you, in the first half the guys who came off the bench did a better job than the guys starting the game,” Wojciechowski said.

Redshirt junior Sacar Anim led the Golden Eagles with 15 points on 5-of-8 shooting. He also shot 4 of 6 from the charity stripe.

“Sacar is really playing like a veteran,” Wojciechowski said. “He’s very dependable. That’s a really good quality for a basketball player to have. … You trust him out there on the court.”

Marquette had a 39-24 rebounding advantage over Carroll, who did not have a player on the roster taller than 6-foot-7. The Golden Eagles also had a 46-10 scoring advantage in the paint.

The offensive firepower came despite much success from the perimeter, which has traditionally been a strength in the team’s offenses. Marquette shot 31.6 percent from long range and had two 3-pointers in the first half.

“We had some really good shots but missed,” Wojciechowski said.

Howard and Sam Hauser, two of the team’s top three players in 3-pointers made, combined to shoot 3 for 10.

“I feel pretty good that Hauser and Howard aren’t going to go 3 for 10 very often,” Wojciechowski said. “If we lose sleep, it’s not about our shooting.”

Senior Tyler Ingebrigtsen led the Pioneers with 11 points on 4-of-9 shooting.

The Golden Eagles’ exhibition matchup against Carroll is the first matchup between the two programs since the 1952-‘53 season. It was also the team’s first time playing against another team in Fiserv Forum.

“Although it’s an exhibition game, it’s different than a practice,” Wojciechowski said. “We had a lot of emotional energy throughout the day anticipating this moment.”

Marquette will open regular season play next Tuesday against the University of Maryland, Baltimore County. UMBC was last year’s Cinderella team in the NCAA Tournament, upsetting No. 1 Virginia in the first round.

“We’ll have to be a lot better against UMBC, and that’s not a secret to anyone,” Wojciechowski said.