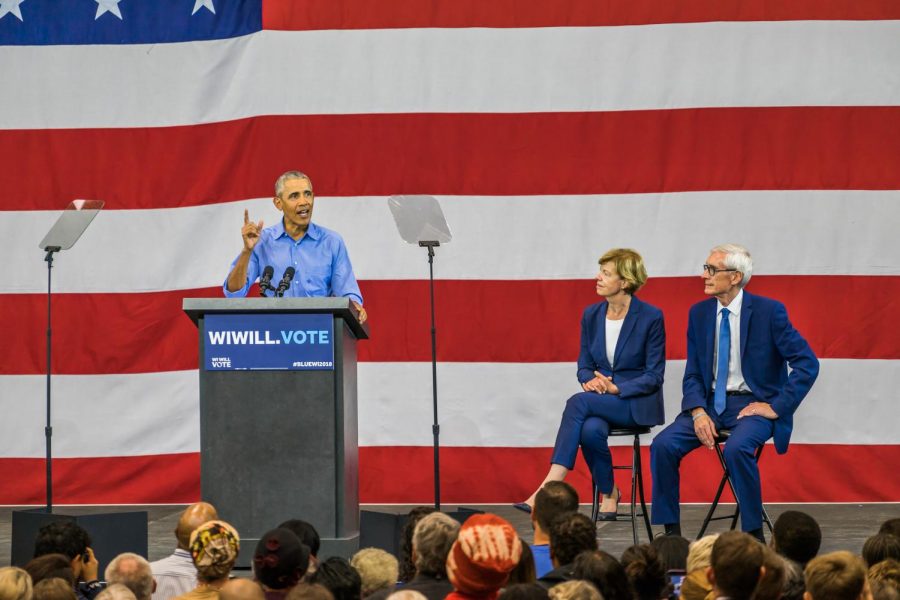 Former President Barack Obama spoke about issues including health care and the importance of voting at the Wisconsin Democratic Rally Friday at North Division High School in Milwaukee.

The last time Obama spoke at the school was in 2014 to endorse then-Democratic candidate for governor Mary Burke when she ran against current Gov. Scott Walker.

Gillian Drummond, press lead for the event, said 3,500 people attended the event with 600 more in an overflow room.

Rallygoer Shirley Dunn graduated from North Division High school in 1988 and said she was excited to be back and see Obama, whom she said she voted for in 2008 and 2012.

Dunn waited for two hours to get inside to see Obama, she said.

“I’m here to represent and let everyone know that they need to get out and vote,” Dunn said.

She said healthcare was the most important issue to her and she wanted to hear the candidates talk about it.

“It helps a lot of people. It helps me and my family.”

The rally focused on healthcare and the state of the Affordable Care Act that Democrats passed eight years ago. Evers, candidate for governor, said in his speech that Walker and others of the Republican party want to cut Obamacare, along with pre-existing condition protections through the federal court.

The Affordable Care Act has three primary goals: to make affordable health insurance available to more people, to expand the Medicaid program to adults with income below 13 percent of the federal poverty line and support innovative medical care delivery methods designed to generally lower healthcare costs, according to Healthcare.gov.

Obamacare and protections for pre-existing conditions exist for 2.4 million people in the state of Wisconsin, Evers said.

In one of her television ads, Baldwin also said 2.4 million people in Wisconsin have pre-existing conditions.  PolitiFact Wisconsin found this claim to be half true however, because of an estimation of 850,000 people could be denied coverage.

Evers is the current superintendent of public instruction and said if he is elected governor, he will give public schools the funding they need and treat teachers with respect.

“Our teachers are not the enemy. They are teaching the kids who are our future,” Evers said. “Every kid should have access to high-quality education, no matter what zip code they live in.”

As Evers stepped on stage, he said he has never seen people more excited, enthused and enraged.

“We’re going to win this thing. We’re fired up. It’s time for a change,” Evers said to the crowd.

Besides healthcare and pre-existing conditions, Democrats honed in on topics of gun control, women’s rights, student loan debt, education, discrimination and freedom of the press.

Baldwin, incumbent candidate for senator, said people should not leave voting until the last minute.

“You have the power. Please do it today or tomorrow … don’t leave it until the last minute. Know your power,” Baldwin said.

After discussing what was on the Nov. 6 ballot from equality to net neutrality, Baldwin then welcomed Obama as headliner of the rally.

Between the Brewers, the Bucks, the Badgers, brats and beer, Obama said there are a lot of good reasons why he would want to come to Milwaukee.

“All those reasons aside, that’s not why I’m here. I am here for one simple reason,” he said. “I am here to ask you to vote — to vote in what might be the most important election of our lifetimes.”

The stakes are high, Obama said. He said the consequences of sitting out in this election are profound.

“America is at a crossroads right now,” Obama said.

“There’s something at stake this election that goes beyond party. What is at stake is a politics that’s decent, honest and lawful and tries to do right by people, that’s worthy of the country we love.”

He went on to say that there shouldn’t be a divide between Democrats and Republicans for how political disagreements, freedom of the press or discrimination are handled in this country. Obama said a great awakening of citizenship is happening all across the country.

Marquette student Tony Pinelli, a sophomore in the College of Arts & Sciences, attended the rally and said he was excited to encourage voting because Wisconsin is a swing state.

“Everyone needs to get out and vote, even volunteer. Whatever your political beliefs are, get out and participate,” Pinelli said.

Julia Sargis, a volunteer at the event, found out about the opportunity from a friend and automatically agreed to volunteer because, as she said, “if you are not part of the solution, you are part of the problem”.

“I’m hoping for more compromise so we can reach more people,” Sargis said. “I think this country is running on fear and with fear comes flight or fight mentality.”

“If you vote, things will get better. If you vote in this election, Wisconsin, it’s a start,” he said.

“When you vote, you’ve got the power to make sure our voting rights are protected. You can save somebody’s life. That power is in your hand, if you vote,” Obama said.

Obama said change and hope begin to happen with each new step.