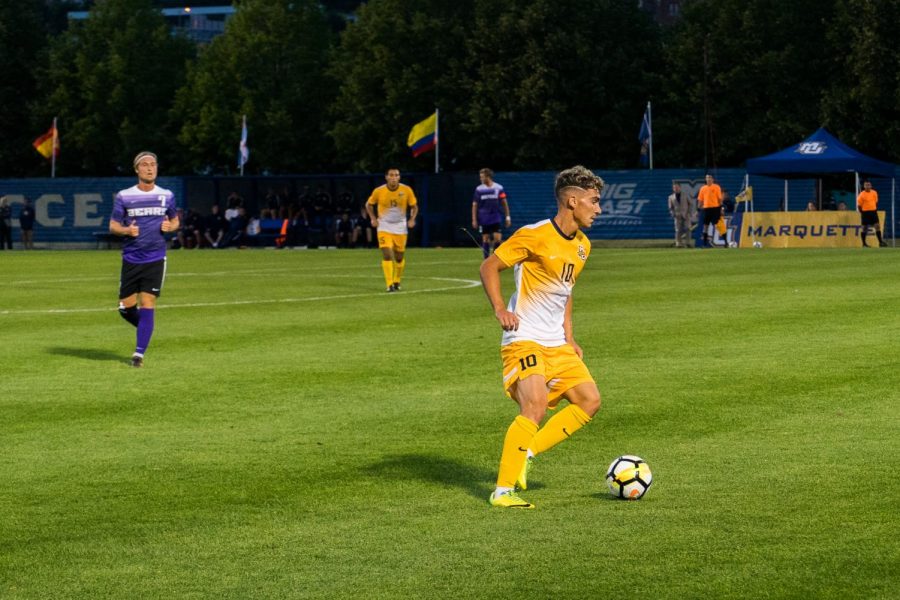 After a slow start to the season, men’s soccer captain Luka Prpa is leading Marquette to an accomplishment that hasn’t happened since 2014: a BIG EAST Championships appearance.

“Ever since I came in my freshman year, I knew we had the pieces to make it to the tournament,” Prpa said. “Unfortunately, it hasn’t panned out that way so far. … We’re something different with the togetherness that we have (this year). This is definitely the best team we’ve had since I’ve been here.”

Not long ago, the Golden Eagles found themselves sitting in eighth place, two spots outside of a playoff spot. In the span of two weeks, Marquette completely turned its season around, and it couldn’t have come at a better time.

“It’s amazing,” Prpa said. “Being this close, I think we just have to keep going strong until the end, and I believe that we can do it.”

Marquette currently sits in fourth place in BIG EAST standings. They have a one-point lead over the fifth-place St. John’s Red Storm and trail the third-place Providence Friars by three points.

“This is the business end of the season,” Prpa said. “These games are big. These are the kind of games you want to be playing in.”

Prpa embraced his leadership role in the team’s late season comeback on and off the pitch.

“I take pride in (being the captain),” Prpa said. “I like being the guy where if the team needs someone to rely on, they can always rely on me. Whenever the team needs me, I’ll be there.”

In the Golden Eagles’ last three matches, the offense scored seven goals total. Prpa is responsible for scoring three of those goals. He tallied two assists in this three-game span. Prpa raised his point total up to 13, which leads the team.

“Before the last two games, we had a full week of training,” Prpa said. “We haven’t really had that all season, and I think that has actually made a big difference in the way our whole team is playing.”

Prpa attributed the change in scoring to the team’s strategy going into games.

“We are much more on the same page,” Prpa said. “Our game plan is clearer to us. We’ve really been firing on all cylinders lately, and my goals and our success have just been a result of that.”

In an Oct. 20 game against Xavier, where the Musketeers were tied with the Golden Eagles in the conference standings, Prpa’s heroics led Marquette’s 2-1 come-from-behind win.

“We haven’t come back from going down a goal all season,” Prpa said. “That’s something we have definitely been working on. … Turning the game (versus Xavier) around like that … everyone is feeling great.”

“It’s huge for this whole group to come back like that,” head coach Louis Bennett said. “It’s another brick in the wall for this team’s success.”

Prpa’s successes are not unnoticed, as he was named to College Soccer News’ National Team of the Week. This is the third time in his career he accomplished this feat. Last week the BIG EAST also awarded Prpa Offensive Player of the Week.

“(Prpa) is an ‘A’ student. He does extra practice, (and) he’s one of the most meticulous guys in training. … He just brings it every day,” Bennett said. “He is one of those success molds you wish you could duplicate.”

This goes beyond just leading by example.

“I don’t believe in leading by example,” Bennett said. “When you are the example, you’re just a good teammate. To be a leader, you have to go above and beyond and accept the responsibility of everyone else. Prpa does that.”

With one regular season game left against DePaul, Marquette’s approach is straightforward.

“Methodically, organized and one at a time,” Bennett said. “That’s how we approach it.”