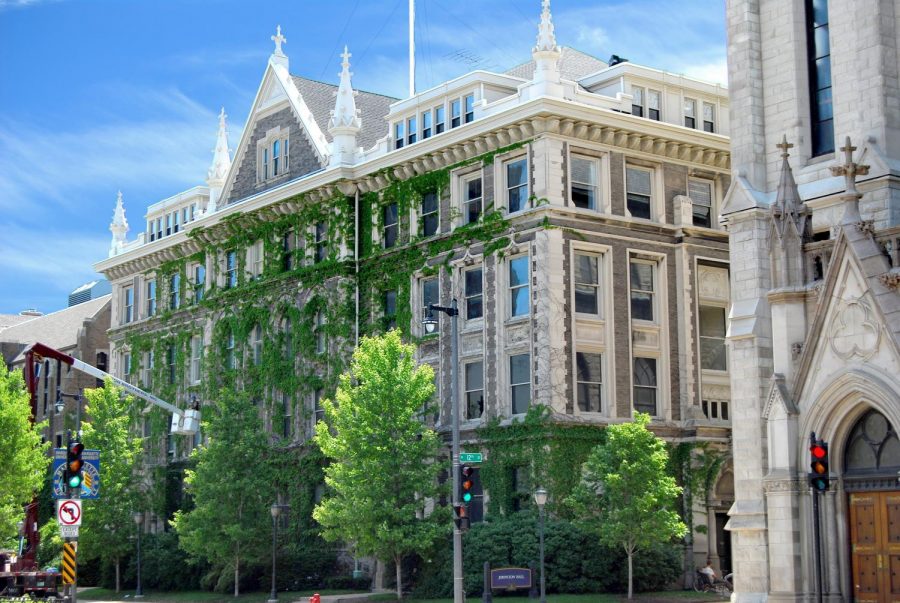 Johnston Hall is one of several campus buildings rumored to be haunted.

Marquette prides itself in its long and rich history as a university, and with long-standing tradition comes a fair share of spooky stories. Buildings all over campus are rumored to be haunted. From Johnston Hall to Humphrey Hall to the pool at the Rec Plex, paranormal activity is no stranger to Marquette.

Laney Decker, a sophomore in the College of Communication, said a ghost in her Schroeder Hall room visits her frequently. It all started during the first few weeks of school when a remote to her fan went missing.

“We tore the room apart looking for the remote,” Decker said. “We looked everywhere and then one day we came back to the room and the remote was sitting right on the middle of the desk.”

A few weeks later a strange orange liquid appeared, seeping from her wall.

“It was really weird, especially since our room was the only room that it happened to,” Decker said.

Decker and her roommate reported it to the hall director who helped clean it up, but they said he was never able to tell them where it was coming from or what it was.

Whether this occurrence is paranormal is up in the air but regardless the roommates were then convinced they had a ghostly visitor.

Decker also said their string lights often suddenly flicker and turn off without being unplugged.

“It’s even happened when we have been talking about the ghost,” Decker said.

Decker’s roommate jokingly named the ghost Britney. But despite her roommate’s lighthearted approach to the situation, Decker said she is spooked by her room.

“Whenever my roommate goes home for the weekend, I hate sleeping here alone,” she said.

Humphrey Hall, which previously was a children’s hospital, has a history of frequent ghost encounters.  Elizabeth De Vere Hunt, a junior in the College of Health Sciences, lived there last year. She said every night she and one of her roommates heard thumping over her bedroom, but the other roommates never heard it.

“One night we had enough and went up to talk to the guys above us,” De Vere Hunt said. “They said that they never did anything to warrant the noise. In fact, all of them were getting ready to go to bed.”

“We never found out what made the noise except when someone said that at 9 p.m. the little girl ghost runs down the hall bouncing her ball,” De Vere Hunt said. “Which is probably what we heard.”

Amanda Krahn, a sophomore in the College of Health Sciences, said last year she and her roommates had some encounters with a ghost in Humphrey Hall.

Besides things moving around, Krahn said she once heard a voice she thought was a ghost.

“I was in the second floor laundry room all by myself and someone shouted hello, and no one was in there with me and it was about one in the morning,” she said.

While most of these stories come from residence halls, reports have been made all over campus.

Haunted Milwaukee, a blog reporting on haunted sites throughout Milwaukee, reported on Johnston Hall and the many ghosts who supposedly haunt the building. The blog highlights specifically the fourth and fifth floors, which allegedly became haunted after two Jesuit priests died by suicide by jumping out of the building.

Other rumored haunted buildings include Straz Tower’s Rec Plex pool, where a boy supposedly drowned back when the building was previously a YMCA in the early 1970s. His ghost, nicknamed Whispering Willie, is said to haunt the pool.

The ghost of Cobeen Hall is an alleged art critic who tears down posters in residents’ rooms.

The ghost of a projector operator still apparently haunts the Varsity Theatre and watches over the building. He supposedly will turn forgotten lights off and will lock mistakenly unlocked doors.

While some of these stories might be merely twisted tales of strange coincidences, students may want to be aware of the many ghosts that might still lurk around Marquette.